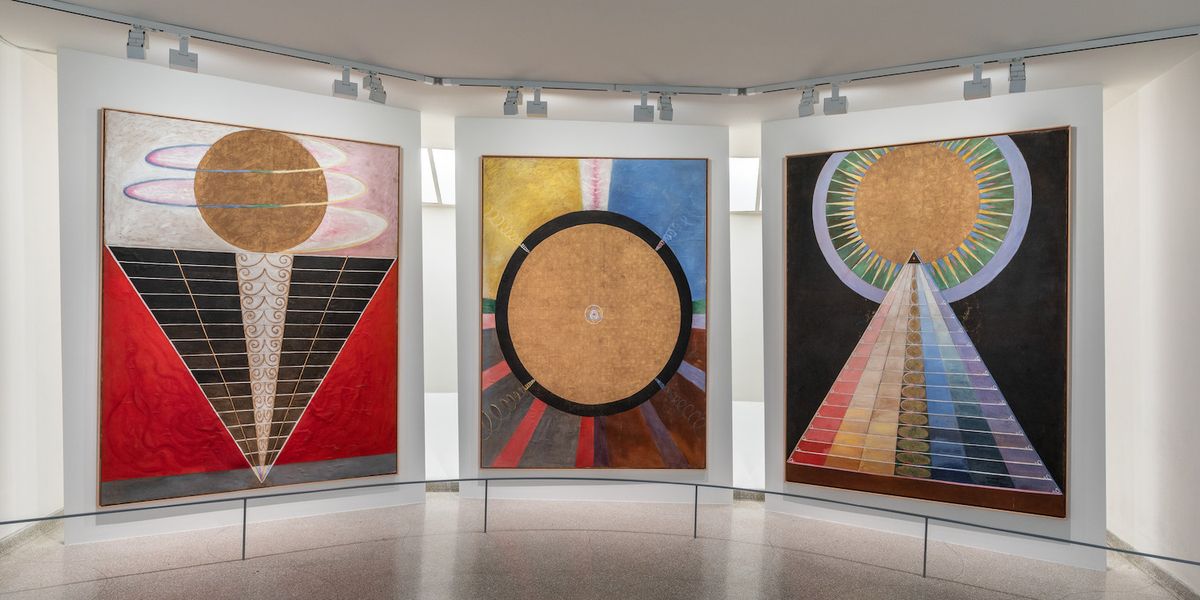 Clairvoyance is the ability to see beyond the immediate into another time and place, to the then and there. To see clearly is to see how things truly are. Tuning in to a frequency where it is safe to transmit messages, recognizing the meaning of a certain color in a certain back pocket, turning to dead generations to find others who share your secret: these are forms of extrasensory attention practiced by queer people.

I thought of queer clairvoyance amidst the rainbows of the Hilma af Klint show, closing soon at the Guggenheim. I wanted to drink the color, as if the dusty lavenders and burnt oranges could nourish me. I stopped to consider a shape that might have been a yellow blossom or an egg, and realized: "I want it inside me?"

My partner cocked her head. "I want to be inside it."

We spiraled up the exhibit, trying to put our finger on what made the art, to us, unquestionably queer. I had a vague memory of hearing that af Klint was a lesbian, but I couldn't place whether I had actually heard it or if it was simply a message received.

How would it shape our understanding of af Klint's art if the show made her queerness central to understanding her vision of the future?

In the months that the show has been up, I waited to see if anyone else would draw that connection between af Klint's sexuality and her vision of the future, and no one did. It felt like af Klint's queerness was a ghost in the show.

Calling af Klint queer is a delicate claim. We only have the usual signs to go by: never married, lived only with women, enjoyed intimate lifelong friendships with women, communed with other astral planes only with women. There are no salacious diaries or letters available, no rumors of her alleged lesbianism, as there are with the founder of Theosophy, Helena Blavatsky. When you research her, you either find no references to her sexuality at all, or you see her, here and there, claimed plainly as gay. Here she appears in the Lavender Review of lesbian poetry and art; here she is on the LGBT Daily Spotlight.

Af Klint's work as a Spiritualist medium, like queerness, was an attunement to signals others didn't pick up. And as with her queerness, her mysticism has been less of a critical preoccupation: too messy, too biographical, too woo.

How would it shape our understanding of af Klint's art if the show made her queerness central to understanding her vision of the future? Erasing her queerness is not merely a problem of representation, but a roadblock for interpreting her work. The critical reluctance to make any claims about what her art does or what kind of future she imagined has everything to do with ignoring the queer implications of her work.

Perhaps because the show is titled Paintings for the Future, critics have tended to defer to af Klint's vision for the future rather than making their own conjectures as to what kind of future, exactly, she envisioned. Peter Schjeldahl, for instance, writes in his New Yorker review, "I don't know what to do with or about it. Maybe some of our artists will. Meanwhile, looking seems a good start." Jillian Steinhauer offers that af Klint helps you "open yourself up to an unfamiliar and more expansive way of seeing the world." Roberta Smith observes that even if af Klint got "there" first in pioneering abstract art, her "'there' seems so radical, so unlike anything else going on at the time." Why is it so hard to put a finger on where "there" is, to name the kind of future she imagines? Why have so many reviews of her work amounted to nothing more than a marketable slogan: the future is female?

If you are attuned to a certain frequency, you can receive the kind of queer future af Klint envisions. But if you are too mired in the here and now as opposed to the then and there, you might not pick up what af Klint puts down. Not everyone is clairvoyant. If most critics have brushed aside her queerness along with the mystical implications of her work as speculative concerns, at best, then perhaps not everyone is spiritually commissioned to receive her messages.

For Hyperallergic, John Yau comes close to calling her queer when he compares her decision to withhold her work from the public until two decades after her death to Emily Dickinson's own reluctance to publish her poetry in her lifetime. Both have been treated by critics as unsexed recluses, in spite of their respectively intense relationships with women.

And as with Dickinson, critics have treated af Klint's vision of the future as hyper contemporary and yet impossibly distant, a horizon that we can see but not reach. It's a familiar kind of future for queer people who aspire towards a liberation that would mean a form of life so radically different it is almost unimaginable. Over the rainbow, somewhere.

It is as if she could only process a binary sexuality on the subatomic level, and call it chaos.

Af Klint's vision of the future is not one that reproduces more of the same. While her work does play with binaries, including the one that pairs up the masculine and feminine, her investment is in the alchemical union of opposites to create something new. She takes up a gendered sense of color — yellow for "male" and blue for "female," green for the harmony of the two — only to name her series of biomorphic forms Primordial Chaos. Her series of canvases struck me as a form of processing, of working through a complicated subject and examining it from every angle and distance. Diagramming, for af Klint, is a way of breaking down the world into its component parts and processing these parts to arrive at a new conclusion. It is as if she could only process a binary sexuality on the subatomic level, and call it chaos.

To appreciate af Klint's work is to disregard an art-historical narrative of direct lineage, of artist responding to artist. Instead of a vertical model of inheritance, her work suggests a horizontal model of community collaboration. She was interested in order and structure, but not necessarily hierarchy: "It was not the case that I was to blindly obey the High Lords of the Mysteries," she said, "but that I was to imagine that they were always standing by my side." Even her mediumship was horizontally organized.

Af Klint's vision of the future has deep roots in the past, as her Spiritualist practice suggests. To contact the dead, after all, is to communicate with lost elders, a queer project in itself. Perhaps this is why af Klint appears as a figure of fascination for Kristen Stewart's character, Maureen, in Olivier Assayas' film Personal Shopper. Maureen is a medium, too, and like the painter, seeks to contact a dead sibling but receives messages from a more ambiguous source. Maureen's queerness is notable only if you know what you're looking for — her tepidity with a male suitor, her Shane affect — but there is a direct line between her ability to commune with the unseen, the magnetism that pulls her towards af Klint, and the unspoken object of her sexuality.

Af Klint's work is a collaborative effort between women and the unseen world. Making her queerness explicit in the show would also allow her audience to understand why she was uninterested in being put in a mainstream lineage of artist begetting artist. Her decision not to show her work until twenty years after her death is a queer refusal of parenthood, favoring her lived community of both earthly and heavenly bodies.

As with queerness, the occult is a body of knowledge, welcoming only to those who wish to be initiated, that has in recent years been exploited by capitalism. If we do not discuss af Klint's lesbianism in line with her art, we forget that she and her Spiritualist collective were queer practitioners of the occult, not straight women dabbling in woo or influencers who use aesthetic as an adjective. Her contemporary queer audience, like the Spiritualists before her, can see what others can't and receive messages about the future from voices of the past.