"Woohoo!" she geekily exclaims while sitting on a comfy couch in Pianos' upstairs lounge before clawing away at a bowl placed in front of her. "Want some popcorn? Just popped -- so awesome." The sight is surreal.

With a shoulder-length red mop, striped leggings, scarlet skirt, sable military-grade collared shirt, and wide frame spectacles, the initial image of the 5' 10" beauty pulling drags from her cigs was darn intimidating. But with a mere woohoo and popcorn crunch, the intimidation abates. Besides, have you seen this girl walk in heels?

Shandi Sullivan -- the Missouri misfit turned (almost!) America's Next Top Model turned LES scene queen -- is currently enjoying a pregame snack before it's time to begin work. For in a few minutes, Walgreens' most famous former clerk, who inexplicably finished third on the second season of America's Next Top Model in 2004, is gonna bust out some Huey Lewis, Corey Hart, Howard Jones, and Duran Duran. That is, as soon as she finishes eating this popcorn.

Although she's graced the likes of Suede ("too shady for me"), Sullivan calls Pianos home. Every Monday night, from 7 p.m. onward, the former wannabe model takes to the turntables in Pianos' upstairs lounge -- a gig she hopes to parlay into a career.

Given how easily she can raise a riot among Midwestern high school girls by just stepping foot near Times Square, it's a rare twist to see someone like Sullivan attempt to make a career out of party-starting. It may seem like a tall order, but then again this is a gal who's risen and fallen before a national TV audience.

For those that don't immediately remember (shame!), Shandi was the ugly duckling of ANTM's second season. Gawkily tall, painfully uncomfortable in her own skin, and possessing a criminal record to boot, Sullivan came to embody the happy potential extreme makeover reality TV shows can have, but so rarely realize.

"After the series, I'd look in the mirror and feel really good inside," she says. "Funny. It just took a hair cut and contacts. But really it was not just that. When I got on that show I didn't think much of myself. Yeah, I had a boyfriend, but so what? He thinks I'm cute but no one else does."

Sullivan now exudes a clear confidence, which she credits to the show. Over the course of one season (four months on TV, but less than two in real life), an indubitable beauty emerged -- one that could attract more than just her hometown beau Eric. Indeed, as the season wore on, that became painfully evident.

The last leg of her ANTM stint found Sullivan and her fellow competitors in Italy. Burnt out, homesick, missing her boyfriend, and yet, looking damned good, Sullivan indulged a little too much in the finest spirits Veneto's vineyards had to offer before drunkenly hooking up with one of the finest mimbos Milan had to offer. Her inevitable confession to Eric certainly made for one of the more excruciating reality TV moments in the history of the medium.

"There's not a single day that goes by when I don't think about it," she contritely notes about that infamous jacuzzi affair.

And yet, all was not lost. Eric and Shandi stayed together for another year and remain "best friends" today. Indeed, the aplomb the show gave her has served her well while transitioning to New York living. After ANTM, Sullivan signed to Trump's Modeling Agency -- that didn't pan out. She even tried selling replicas of the Shanthrax and Evil Shandar shirts she sported on the show. But that didn't pay the bills. And so, until a friend suggested the Pianos gig earlier this year, Sullivan returned to what she knew best -- Walgreens -- to the glee of many a blogger and reality show hater.

"I love going to Gawker and Television Without Pity. I love when people try to put me down. You think by posting that you're gonna ruin my whole day?" she gleefully sneers. "When Smoking Gun found my mug shot! And when it appeared on VH1's top celebrity mug shots! That's hilarious!"

Now though, it seems Sullivan's on the rise. She's even in talks to join the Killers' next tour (with whom she shares a manager). As she finishes her set, some guy in a khaki army cap approaches and starts chatting her up. It's the formerly cuckolded Eric, who also lives in New York now, proving her assertion that the two remain close.

"Head Over Heels" plays, and Sullivan prepares for Pianos' other Monday night amusement: Karaoke Killed the Kat. Tonight, Ms. Sullivan reports she will be singing Alice Cooper's "I'm Eighteen." And by the way, don't worry about her traversing that stage. Asked about her walk nowadays, Shandi snaps: "It's awesome!"

Shandi Sullivan spins at Pianos on Monday nights at 7 p.m. 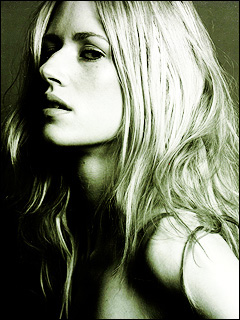 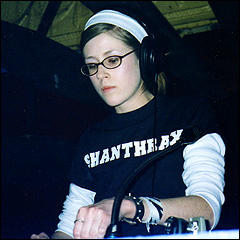