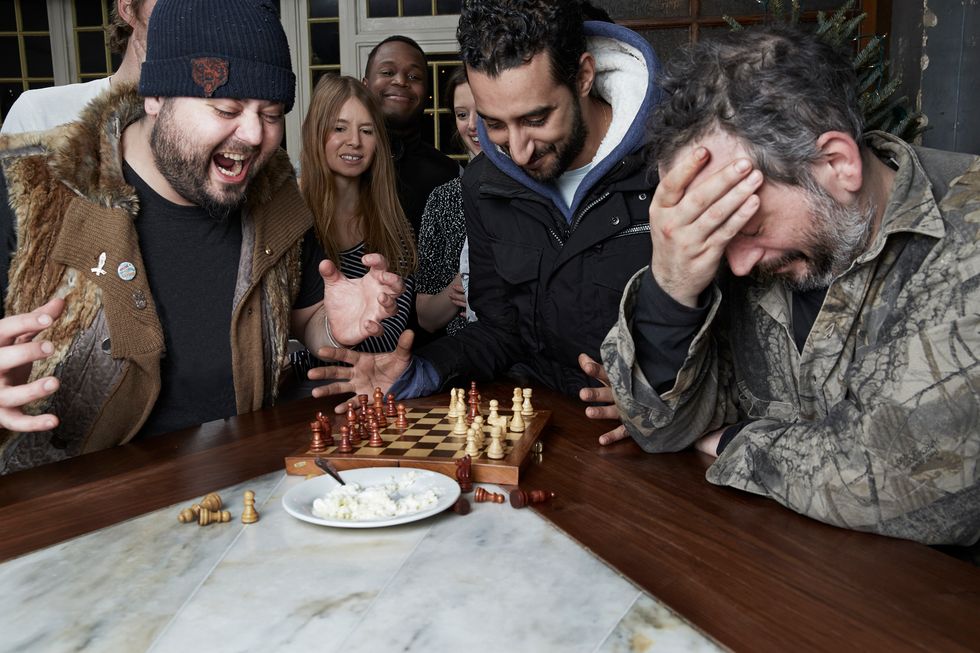 Homer Murray (far left) and Dennis Spina (far right). [Photo by Nathan Martin]
River Styx, a free-spirited, Mediterranean restaurant named for the mythological Greek boundary between Earth and Hades, opened in a remote part of Greenpoint last year. Co-owner Dennis Spina, 34, and chef Homer Murray, 32, are throwing a Sicilian-style blowout New Year's Eve party with an eye on having fun, not making a ton of money. Winter melon punch will be complimentary. Oysters doused with Champagne are $4 a slurp. Everything is Ã  la carte, from $8 nachos to roasted goose and lentils for four ($70). Music and drinking will not end at midnight. Spina and Murray (son of Bill) say reservations are still available.

The part of Greenpoint you're in is so obscure. How did you end up there?

Dennis: A friend of ours who lives in the neighborhood said the space was really cool. Sixty years ago it used to be a bar called the 21 Club. Somewhere along the line it became an engine machine shop. We kept the pulleys from the shop; one has a disco ball hanging from it.

I love that you have nachos on your menu, but they're not the kind of crappy nachos I've had at other places.

Dennis: Originally, we had friends and family in and did simple party food like nachos. When you get opening jitters, you don't want somebody looking at your menu and saying, "There's nothing for me here," so we'll always have them. We make them with fresh chips, cheese sauce with pickled jalapeno juice, chicken breast braised with beer and chiles, crema with Japanese mayonnaise, chives, fresh radishes and cilantro. On the weekends we sell hundreds of orders.

How did you get into the restaurant business?

Dennis: I was a fine artist for a little while and used to design record albums. I went to the School of Visual Arts and worked as a line cook. Ten years ago I started Roebling Tea Room. I'm still the chef there and go back and forth.

How did Homer come on board?

Dennis: We went to college together at SVA. Six or seven years ago I was putting together a new team at Roebling and wanted more energy, less formally trained cooks. I wanted it to be fun and creative and reached out to those kinds of people. He was one of them.

Homer, did you have any cooking experience?

Is that for real?

Homer: It's real. My dad is one of nine kids and it's owned by five uncles, inspired by their mutual love of golf. When I was in art school it was my summer job, but I didn't know what my career was going to be back then.

At River Styx are you the chef de cuisine or sous chef?

Homer: We don't have any silly titles. You can call me whatever you want.

Did you ever do any acting?

Homer: I was in one movie, but I'm not an actor. It's a drag to just stand around all day. Of course, I stand all day now, but it's different.

What movie was it?

Jim Jarmusch? How did you end up in that?

Homer: I had a passing resemblance to the lead -- my dad.

Does your dad come to the restaurant?

Homer: He's been in.

So you decided to cook professionally when Dennis contacted you for Roebling Tea Room?

Homer: I liked that he used the term 'gastronaut.' My girlfriend dragged me down and made me do it.

Are you with the same girlfriend?

Do you and Dennis have anything to do with the arts anymore?

Homer: We both have that drive toward creativity but found a different way to express it.

Do you have anything else in the works for 2015?

Homer: It's quite hush-hush, top secret, but yes, we're looking for another place, mostly in Brooklyn, maybe in Greenpoint. All I can say is it'll include food and liquor.