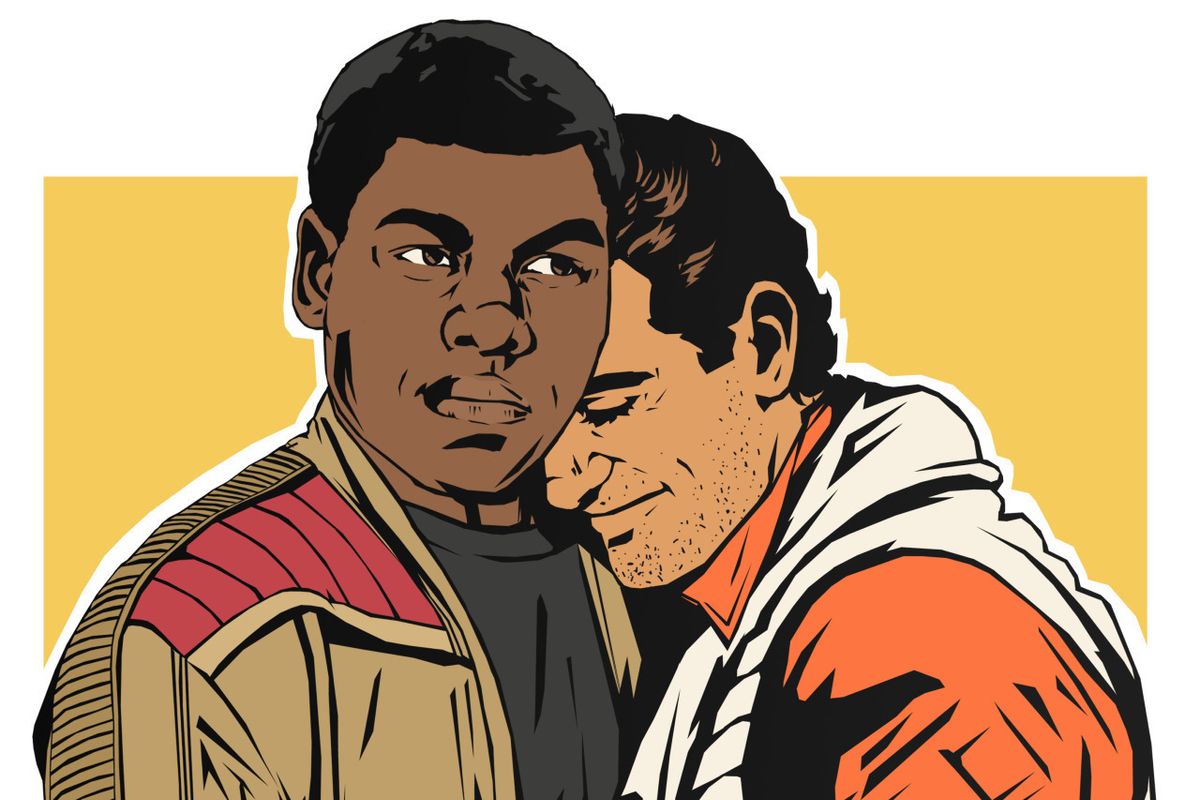 It's More Than a Bromance.

Bucky and Captain America are in love, and I don't want to hear any of you argue otherwise.

Especially since this is a big deal for the action-adventure genre, typically associated with heteronormative relationships and alpha males. Over time, testosterone-fueled franchises like Captain America, X-Men, Star Wars, and even Star Trek have been slowly obliterating man cave-like dynamics and the myth of male masculinity. They've seen male characters acknowledge their feelings in general and their feelings for one another -- whether those be familial, friendship, or whatever we saw manifest when Oscar Isaac told John Boyega to keep his jacket in The Force Awakens. (It did really suit him, you know?)


This trend, which has been especially championed in movies over the last year, seems to only be incresaing and now, going into blockbuster season, bromance-as-true-love is seriously afoot -- minus one, which we'll get to in a second.

First, let's acknowledge the majestic pairing of Boyega (Finn) and Isaac (Poe Dameron) as best friends-turned-partners in crime in The Force Awakens. After Poe is captured and Finn frees him in hopes of escaping the First Order as well, the two nearly die after crashing into a planet, and Poe disappears and leaves only his jacket -- which Finn ends up keeping. The two eventually reunite, and the rest is Tumblr gif and fan art history.

Poe and Finn need to be a thing and I will stand by this till death pic.twitter.com/iSg8hdaah0
— SWITCHING accounts (@enveevict) December 22, 2015

Which is on par with how quickly Finn/Poe became the Star Wars ship -- even though Finn and Rey (Daisy Ridley) spend the whole movie together in a vague flirtation. Even better is that Poe and Finn's dynamic is opposite to that of the emotionless, steel-cold relationship of the film's villains, Hux (Domhnall Gleeson) and Kylo Ren (Adam Driver), who are quiet enemies thirsting for affection from Supreme Leader Snoke. It's refreshing to see Finn and Poe as actual allies -- as people emoting warmth and vulnerability -- especially since Poe is also the first person to treat Finn (a former numbered and faceless stormtrooper) like an actual human, proving that love outranks hatred and indifference, tenfold.

And it's that same type of love that fuels the plot of the upcoming Captain America: Civil War, where Steve Rogers a.k.a Captain America (Chris Evans) and his childhood friend-turned-(former) enemy Bucky (Sebastian Stan) form their own alliance. (Tumblr has deemed this ship, "Stucky," in case you were wondering.) Opting to take on Iron Man (Robert Downey Jr.) and The System instead of abandoning their friendship, Cap and Bucky ban together -- along with a few select allies -- to fight for their shared beliefs, which arguably jeopardizes their lives in the process.


"He's my friend," Rogers says to Iron Man, which prompts the comeback, "So was I." (Burn!) But where Iron Man and Cap's friendship was based on one-liners and underlying resentment (read: bro code), Bucky was the type of friend who consistently stood up for Rogers and then fought alongside him until his own capture. And even then, in the 2014 Captain America film, Bucky still won't kill Steve, and Steve vows to find and save him. Which has a trickle down effect: before learning of Bucky's fate, Steve befriends Sam Wilson/Falcon (Anthony Mackie), whose relationship with him mimics that of Finn and Poe's: Sam, a fellow former soldier, makes Steve feel less alone -- and then ends up fighting along with and saving him in the process. True love forever.

Which is the only way to describe the dynamic between X-Men's Professor X (Patrick Stewart) and Magneto (Michael Fassbender), whose differences turn the two into enemies more often than allies. But it's not when they're young that we see them acknowledge how much the other means -- it's when they're older, wiser, and more aware of how much they need the other, especially since few mutants (and men) can relate to and understand each other the way they've been able to. And (at least in X-Men: Days of Future Past) they don't shy away from saying so, either.

And that's why a film like Batman Vs. Superman seems so outdated and gimmicky -- especially when we've seen the Odd Couple™ effect done much better in movies like Star Trek (Spock and Kirk forever) or The Man From U.N.C.L.E., where the latter (Ilya and Solo) hardly shy away from their homoerotic undertones and can't -- despite orders from their superiors dictating otherwise -- kill the other. So now, to see grown men in superhero costumes unable to do anything but glower and threaten, is less dramatic than it is eye-rolling. Masculinity doesn't need to hang on heteronormativity or gender conformity as every other sci-fi and action movie has proven to us.

Hell, even Tommy Lee Jones and Harrison Ford embraced their emotional connection at the end of The Fugitive (in 1993, no less) when Ford's handcuffs are removed by Jones, his former adversary, and replaced with an icepack (swoon). And while they were arguably the genre's action-adventure Lemmon and Matthau, we all know The Odd Couple (and Grumpy and Grumpier Old Men) used banter to disguise how much both male leads cared about each other.

But there is one way Batman Vs. Superman can redeem itself -- Clark Kent should give Bruce Wayne his jacket.