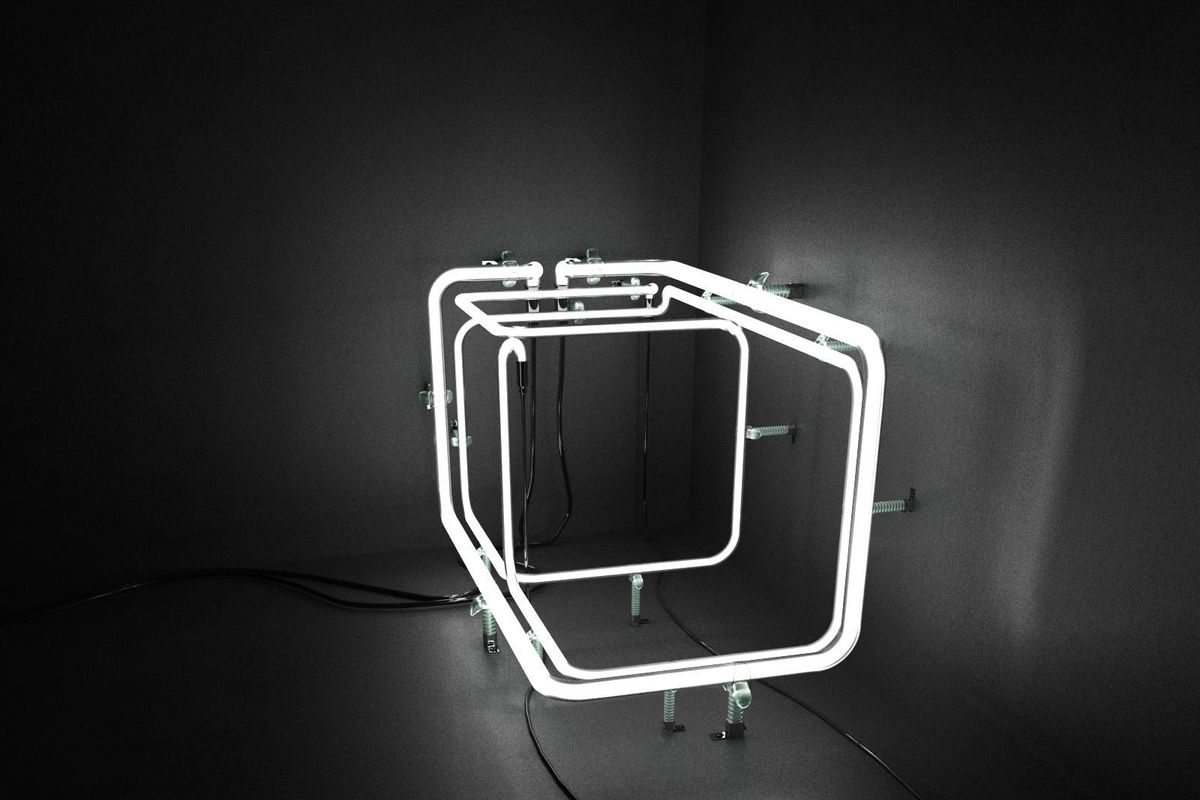 Listen To Her Records' Tense And Terrifyingly Good Fourth Compilation

Two years after the release of their third label compilation, South London's Her Records have just come back with Her Records Volume 4 -- and it definitely ups the ante on their signature brand of brain-melting globalized club productions, 1000%. Featuring 13 tracks from the likes of label regulars MM, Sudanim, CYPHR, Kid Antoine, NKC and Fraxinus (alongside contributions from Soda Plains and Staycore's Dinamarca), it's one of those rare releases that continue to fit snugly within a label's oeuvre, while still attesting to how much they've grown as producers in the past couple years. Continuing to deliver the same punch as their previous Volumes, as exemplified by bomb shelter sirens, cavernous booms and a penchant for razor-sharp, crystalline synthlines, the apocalypse is just dialed up to a terrifying 11 this time around. So ahead of our imminent annihilation, we spoke to head honchos MM and Sudanim about the nail-biting tension of this particular effort, the label's growing pains and the renewed vision they have for Her & Co.

Welcome back, guys! I guess I'm curious to know, why the wait? Or maybe the better question is why now?

MM: [Before putting] it out, we had to spend a lot of time getting the tracks right. There were a few stages where we could have said, "Let's put it out with just these tracks," but I think we wanted to wait longer and make sure that it was the right set. [We wanted to make sure they were] tracks that worked together cohesively rather than just saying, "Here's twelve cool tracks, let's put these out." We wanted it to be like a [formal LP release] rather than just a compilation, I suppose.

Sudanim: I think [the biggest difference between Volume 3 and Volume 4] is that the running order has more relevance this time. There was more thought put into the tracklist and that's what took extra long.

But it is kind of an interesting choice to put out a "formal label compilation" and include a bunch of guest producers as well. Why choose to extend this family affair to other producers, namely Soda Plains and Dinamarca? Are these people you're going to continue working with and/or maybe induct into your label?

MM: Well it's a tradition. It started having [Murlo] on the first compilation. No one really knew who we were then, so it was good to have someone [established like Murlo] to cosign us...This [inclusion of Murlo from the first release basically started this whole idea of putting] two people we really fuck with [on the comps with] two of their tracks that we think reflect our sound and what we're trying to do.

[As for this release], there were a few people we tried to get, but didn't work out. But [Soda Plains and Dinamarca] are two of my favorite producers who have come about recently. They're people we might work with in the future...We've wanted to work with Soda Plains for a while, but he's got a lot of different projects. And Dinamarca, he's got his own sort of thing with Staycore and everything. But I'd like to say we would want to work with Soda Plains in the future. I can't confirm anything yet though.

Moving on, what would you say is the biggest difference between the release and Volume 3?

MM: There's a much broader range of tempos on [Volume 4] for starters. It's much more reflective of the kind of clubs that we've been playing [lately]. We released Volume 3 when we were playing sets that spanned across all tempos...This compilation is a good representation of the sound we've been pushing for for a long time and [a reflection of] sort of where we are now. So it's definitely a darker sound. It's darker and there's less [melody], or a more strange use of melody. It's quite aggressive.

Why do you think that's the case? Do you actually think we're going to fast forward to "WW5" soon? I mean, it does kind of feel like the end times.

MM: I mean, I wonder about that actually. We were quite young when we put out Volume 3. There were tracks on there that felt silly, almost. A little bit more ridiculous, I mean. I was 19 [when we released Volume 3], so I think I was just kind of making sillier music. I don't know if I've since been hardened by life or whatever. It's hard to say whether your new production is reflecting changes in your life. I'm not sure why our shit sounds darker now.

MM: We were so young when we were putting out the last compilation that we were just kind of playing around. We hadn't really figured things out as much.

S: I also think going back to what we said before, Volume 3 was more of a way to say "thank you" to people that were fucking with us. So for that, we wanted to put together the biggest, or, everything was supposed to be a hard-hitting club track [out]. There was no real concept [other than] "just give us a dope track and we're gonna put all the dope tracks together and then they're gonna go out for free and whatever." But with Volume 4, I guess there was more of a focus on the theme of the record and what would work better with this track and [whatnot]. And I think once that theme started developing, the first two tracks that worked were sort of dark tracks, so everything started to fall into place around that. In the end, even the bonus tracks are pretty dark.

MM: I think it was about learning what worked better in the club as well.

Sure. I mean everything has gotten a lot darker in the club in the past few years. Maybe it's the Rabit effect?

Yeah, that's probably more apt. Anyway, I know you guys mentioned "renewed mission statements" playing a big role in this release. Could you maybe talk more about exactly what that entails?

MM: Well, the "renewed mission statements" [refers to the idea of us asking each artist on the label] what they're saying now musically. This compilation is us submitting [tracks that demonstrate what each of us] is about, sonically. And in the previous Volume, it wasn't reflecting what we were each about at all. Like, you had a really pompous, ridiculous track by Kid Antoine, which obviously I loved, but it's so different to what he's about now. We just needed a whole refresh on what we're about, so people [could have a better idea of who we are individually].

S: Yeah, just speaking for myself, I wouldn't even say my contribution [on Volume 4] is even what I'm about at the moment. There's no conceptual mission statement as far as I'm aware.

Gotcha. One last question. I know you guys have addressed this topic before and made active steps to change, but in regards to the criticism you've received in the past re: your names and the utilization of sonic signifiers inherent to genres like global bass and ballroom, have any of these critiques changed the way you guys are approaching new releases or the rebranding of the label?

MM: 100%...We're happy to put out absolutely anything that comes to us if we think it makes sense on Her Records, regardless of who's made it. [And, you know], the A&R side of Her Records has always been pretty lowkey. We're more of a tight group of friends making music than we are a traditional record label -- [like] we've only actually made two proper signings since forming the label in 2012.

But while being a strong team is always going to be more important to us than churning out records, I think there's a general feeling amongst us that we want to be looking outward more, thinking more about A&R, and when it comes to that we definitely want to be prioritizing female talent...It's important [for us to now] be bringing on women and people of color.

S: Well first of all, the label was named in a mishearing of a suggestion [during a] brainstorming session...There was no intentional connotation for HER Records [to speak to the current state of women in music or attempting to appropriate that identity], and I think it's quite unfortunate now that we're a bunch of guys going as "HER Records." So definitely there's been [a lot of discussion about how we can move forward better]. We've overthought things quite a lot and are planning to expand our roster a little bit [to be more diverse].

MM: [If anything though, these discussions] make us think about our role in the club culture. So yeah, it's definitely an unfortunate situation that our name is [Her]. We were 17 at the time [when we came up with the name]...There was less of this discussion happening then and it was something I started realizing maybe two years after [we formed the label]. Like after being more active on Twitter and having conversations with people. That kind of thing made me realize a lot more...like what the context might mean.

Hence your name change from Miss Modular to MM?

MM: Oh yeah, exactly. And that's like me thinking, "That doesn't work anymore that doesn't make sense." [My name change was a] direct effort to make an effort to combat that.

Originally it was a Stereolab reference. I probably chose that when I was even younger than 17. It was kind of cute to me, I suppose. [You know that line of thinking where you're a 16-year-old who's like] "this is kind of subversive." Like you have a blog where you're not doing what people expect of you. But when you look back again at it at 18 you're like, "Maybe this doesn't make as much sense. Maybe this is actually kind of problematic."

It's cool to see you guys actively trying to reorient.

MM: Yeah, well I mean, we kind of take this approach to our projects in general. Like [we'll have our] catalog start on the fourth release and we'll remove stuff on Soundcloud retroactively -- a bit of like a Kanye West Life Of Pablo thing, editing things after release.

Are you gonna do a new versions of "Wolves"?