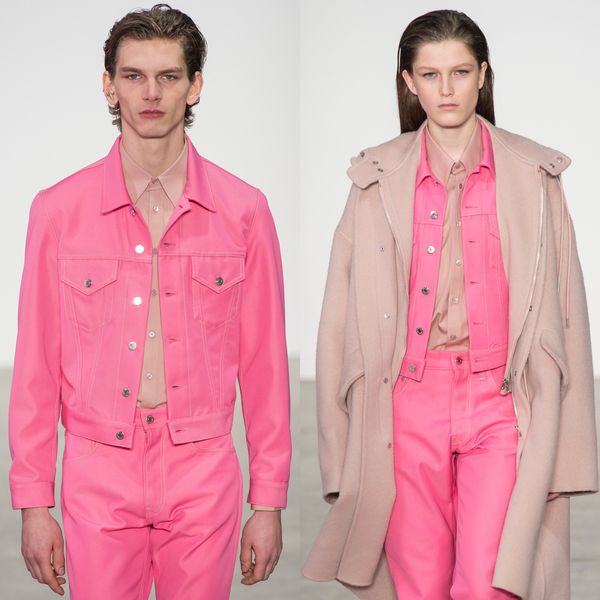 Helmut Lang Gave Us Hot Pink His and Hers

It comes with a touch of irony to say that the trailblazing, eponymous brand of Austrian-born designer, Helmut Lang is being reinvented yet again. Since the designer's departure in 2005, the cult brand that brought you minimalism has been morphing with the times. Since Hood by Air's Shayne Oliver had a season-long stint at the house for spring 2018, the brand has been off the runway — until now.

With a new creative director, Mark Howard Thomas, at the helm accompanied by Helmut Lang jeans director, Thomas Cawson, the brand saw a tremendous return to form for its fall 2019 show. The return couldn't be more timely, either. Just last month the brand launched its "Certified Pre-Owned Program," selling collector's pieces from the Helmut Lang's archive and proving that what's old can definitely be new again... and again.

Quenching the cult's thirst for newness, the duo rolled out a tight collection of masterfully tailored men and women's suiting in a heritage palette of white, grey and black with pops of pink and red. Showing sheer tees and some clever kinks in the form of leather and classic parkas, the brand's reinvention was as much a reintroduction — mainly to some key elements that Helmut Lang pioneered in the late '90s but are now fairly commonplace: gender-fluid dressing, minimalism and deconstructed designs that have influenced modern fashion.

Poised for a full-throttle return to the main stage of fashion, Thomas is backed by years of experience that includes stints at Givenchy and Neil Barrett while Cawson formerly directed Calvin Klein Jeans under none other than Raf Simons, a longtime fan of Lang's. This was also apparent in his and hers pink twill Canadian tuxedos that walked the runway.

With a front row that included actor Lakeith Stanfield, the New York Fashion Week return of Helmut Lang is an event that marks a new day for the Lang legacy — not that it ever really left.