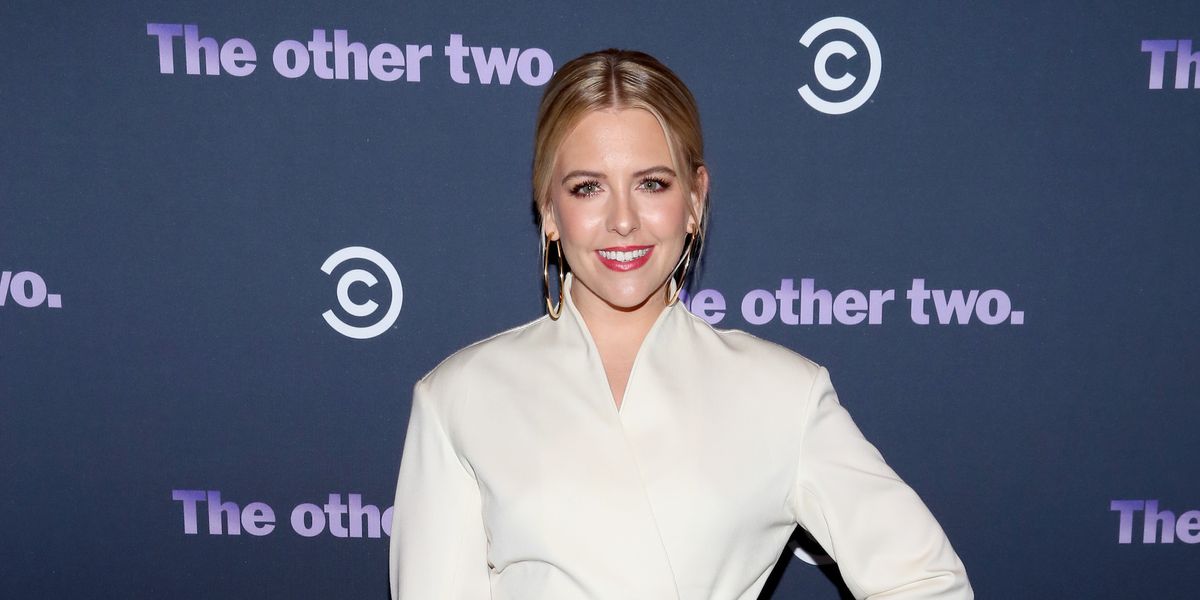 It's been nearly a decade since Instagram came on the scene, upending our social media habits, reshaping the marketing industry and ushering in a whole new world of influencers. And yet despite the explosion of social media stars (and the countless think pieces written about them), there are very few depictions of this world on TV or in movies. Enter The Other Two, Comedy Central's new series from former SNL head writers Sarah Schneider and Chris Kelly. The show is a hilarious, sharply-written satire of the entertainment industry and its transformation in the wake of social media's rise. The show centers on two late- twentysomething/early-thirtysomething siblings Brooke and Cary (played by Heléne Yorke and Drew Tarver) struggling to make ends meet and launch creative careers in New York City when their much-younger pre-teen brother Chase (played by Case Walker) posts a music video on the Internet, goes viral, and becomes a famous pop star.

As their younger brother turns into the next Justin Bieber or Shawn Mendes and encounters doofus-y managers, venal PR and marketing execs and requests to plug brands like Bagel Bites during a red carpet livestream, the audience shares in the sense of amazement at the absurdity of it all through Brooke and Cary's eyes. What also makes this show such a gem is that underneath its smart pop culture (and Internet culture) references and well-crafted jokes lies a sweet, sensitive core, made apparent by how supportive and protective Brooke and Cary are towards their little brother. As Brooke, Heléne Yorke does a particularly good job toggling back-and-forth between being a hapless Millennial who doesn't have her shit together and a caring, nurturing older sister who ultimately takes on the role of her younger brother's assistant to great comedic effect. Yorke, who previously appeared on shows like The Good Fight and Masters of Sex and was a PAPER Beautiful Person in 2014, chatted with us about playing Brooke, why her Instagram feed is only interior designers and drag queens these days and what working on the show has taught her about Gen Z.

What was your first reaction when you got the audition for The Other Two and read the pilot script?

Of course I knew who Chris [Kelly] and Sarah [Schneider] were and when you get an audition email, you get the whole breakdown of everything -- who wrote [the project], who's at the head of it -- and I was like, "Oh my god, [Chris and Sarah] wrote a pilot for television, this is so exciting!" And then I read [the script] and was going in for the role of Brooke and was like, "Oh shit, now I want this." That's the worst as an actor to get a piece of material that you're like, "Goddammit, now I want it. I have to try to not try hard." Which is virtually impossible... It felt like it fit me so easily so going in for it was scary, not because I was worried [whether] I was going to do a good job but because wanting something so badly is scary.

Tell me about when you found out you'd gotten the part.

I was sitting on my couch at home with my brother and I think I started to cry. It was one of those things where when I met [Chris and Sarah], I was in the room for 40 minutes just shooting the shit with two people who I naturally got along with. I remember walking down the street and calling my manager Russell and going, "Oh god, I'll never get this because this is such an inside job with these cool, hip comedy cats. But do you think they'll have a drink with me sometime? I really think I get along with these people and I want to be friends with them and maybe some other thing they do down the line, they'll want me for." And then to get called back [for another audition] and to have it look like [the role] was going to happen was just so mind-boggling. And I still sort of feel thrown by it. We're doing season 2 and I still feel like, "Gosh, I hope they still want me to play the role of Brooke."

It hasn't fully sunk in yet.

Exactly. And, you know, with stuff like that, people ask, "What do you want to do for the future?" And I'm like, "What I wanted for the longest time in my life was to be a series regular in a cable comedy show with material that people were responding to and that's exactly what I'm doing. So I'm kind of a pig in shit right now."

Tell me more about getting in character to play Brooke. What are traits you two share?

I'm embarrassed about how much we share. I'm a blind optimist and that's something that I really relate to with Brooke for sure. I think that anything that happens to her, any opportunity that presents itself, she sort of throws herself into it with gorgeous confidence that it's going to work out. Even in the instances where she'll land on her face, she'll pivot and turn around and be like, "OK, what's next? What else is possible?" That's something that I definitely relate to on a very base level.

The series is such a smart, sharp portrayal of the social media influencer industry that exists today, something that not many other shows tap into. Have you had any funny experiences navigating the influencer marketing world as an actor?

Frankly, I'm at a point now where I'm like, "They'll pay you to post? I'm dying for that to happen!" I wish I had sponsored content so I'm putting that out there for that to happen to me. I'm very receptive -- please pay me to post, I'll do it... I try with social media to have a positive relationship with it because it is such a central part of how we live now and it's one of those things where I went down a bit of a toilet bowl with it for a while and I took a break and came back and realized I can really decide what I see and curate who I follow to a certain extent. So now I follow interior design posts and drag queens. Everything is very happy and great...

[But] I think there's a lot of pressure with [social media] as well. It can be like, "I'm an actress, I went to school, I learned my craft as it were and all of a sudden I have to have a social media presence and have enough followers to get a job?" And certainly in some ways, that's definitely the case but, I don't know, I think people who are great at it, I'm only impressed by it.

I think it comes more naturally to some people than to others.

Totally. I bought bathing suits the other day because some girl who was on vacation with Chrissy Teigen was wearing them. That is a powerful thing. I was like, "She's having fun, she looks great, she doesn't weigh 90 lbs. I want that bathing suit." It's so interesting working with Case Walker [the actor who plays Chase Dreams] on the show. I'm trying to be less of a curmudgeon on my porch being like, "Grrr kids these days" and think it's actually kind of amazing what's happening and how we're absorbing content. And I think people have more power than they realize over what they see than they give themselves credit for.

Speaking of Case, has working with him given you insight into Gen Z and the biggest differences between them and Millennials?

I will say Case is a bit of a unicorn. That kid is incredibly savvy... I think that [Gen Z] is exposed to so much and they see so much and they almost know more nowadays because there's so much more being thrown at them all the time, being that age and with social media... I think since we weren't raised with social media that it's really easy to say from the outside, "Oh, this makes growing up so much more difficult for them" or this, that and the other thing. But being a teenager, you're experiencing everything for the first time at that age.

As you guys gear up to start work on Season 2, anything in particular you'd like to see happen to Brooke?

I hope you keep seeing these people be humans and mess up and pick themselves back up again. It'll only start happening hopefully on a bigger scale. I know Chris and Sarah have a lot of big ideas. We were at dinner last night and they told me some of them. I just got excited about it because now that we know these characters and we know each other so well, it's just going to be so much fun to keep going with them, to grow with them and to see what happens. Nothing is linear in life and so I hope it's not linear for Brooke.

The Other Two airs on Comedy Central on Thursdays at 10:30pm ET