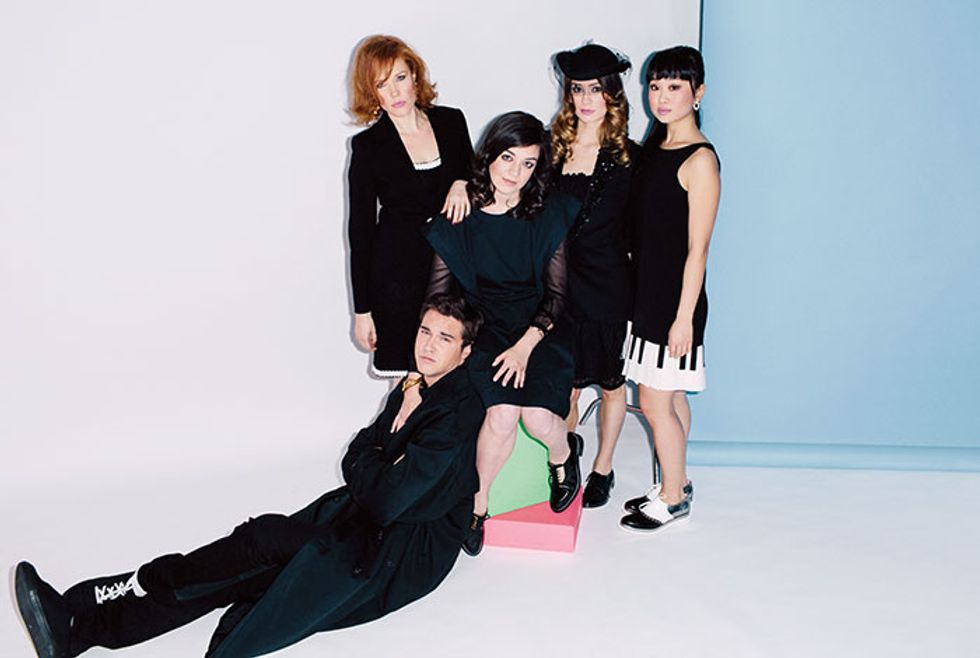 (L-R) Jessica Keenan Wynn, Ryan McCartan, Barrett Wilbert Weed, Elle McLemore, Alice Lee
"Do you want some corn nuts?" asks Heather Chandler, the most popular girl in school. "They're really good." We're in what feels eerily like a high school gymnasium or cafeteria. The only giveaway that we're actually in a Times Square rehearsal space is that the four coolest girls in school are hanging out with the homicidal new kid J.D., a life-threatening faux pas in real life for sure.

Afterward, director Andy Fickman tells us how the film kills off all the great characters way too soon -- but in the musical version, just because you're dead doesn't mean you're off the stage. Jessica Keenan Wynn, who plays "Mega-Bitch" Heather Chandler, the film's first victim, isn't giving up too much about what that might mean. "Her spirit lives. You can never really get rid of Heather Chandler."

"I am very haunted by Heather Chandler... tortured," offers Barrett Wilbert Weed, who plays Veronica, the role Winona Ryder made famous. When asked about her own high school experience, Wilbert Weed says, "I'm 5'9". I've always been this height, I've always been loud, I've always had a face that expresses itself like a Muppet, so people just beelined for that. They were like, 'She looks weak -- let's go for her!'"

"Look who's laughing now," says a surprisingly supportive Heather. After a moment she adds, "But there'll always be a 'Heather' around." Gesturing toward our auditorium-esque surroundings, Ryan McCartan, who plays J.D., the role Christian Slater originated, sums up what we're all thinking: "Because high school never ends."