"He Is An Extremely Limp Stalk of Celery": The Fug Girls On The Royals 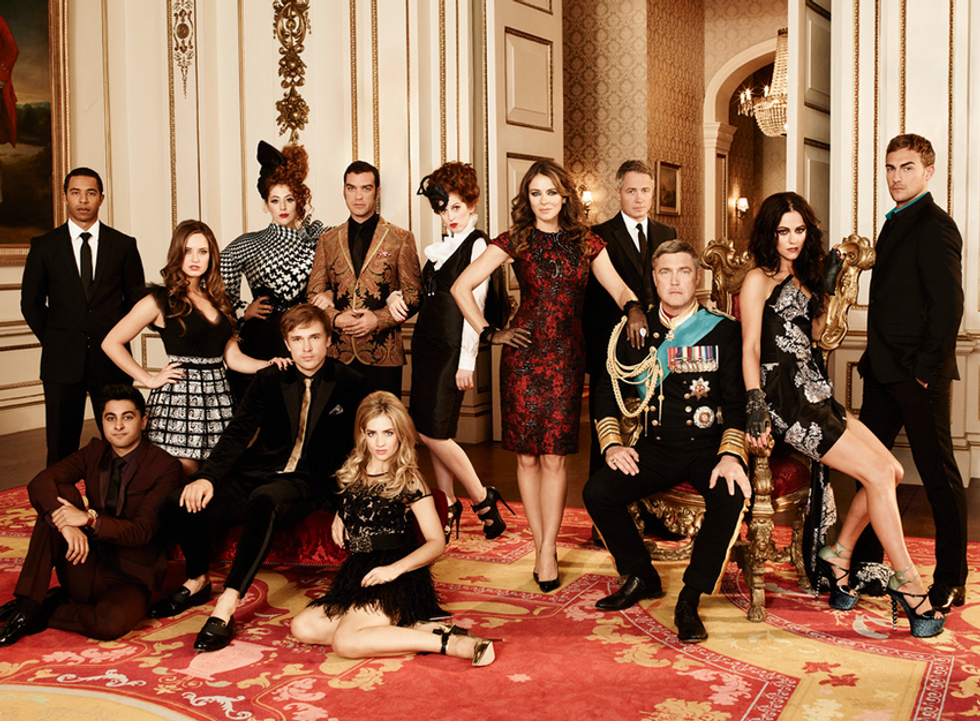 Being a rabid royal historian I'm fascinated/horrified by E!'s new deliciously trashy scripted show The Royals, a sensational tabloid style drama about a fictional royal family of England. I decided to speak to my fellow followers of all things tiara-related, The Fug Girls, Heather Cocks and Jessica Morgan, to hear their thoughts and critiques of the new show.

As monarchists, does it bother you when the show has major inaccuracies?

Jessica: I don't know if I can actually technically call myself a "monarchist," as an American, but I am DEFINITELY a big fan of all things royals and royal-related. There needs to be a word for that! As far as The Royals -- or any fictionalized take on a royal family -- goes, I think that you have to be able to extend a fair amount of artistic license, or your face will catch on fire. (And by "yours," I mean mine; I am secretly really nerdy about these things, but I am trying to unclench.)  E!, at least, is not pretending to be presenting us with a meticulously-researched take on what it's really like to be a royal. (In fact, I recently read an interview where Alexandra Park said that they didn't have any briefings on accuracy, even.)

Heather: I basically had nine aneurysms during the first two episodes -- one for each time anyone loudly said "King of England" or "Queen of England," because although that's colloquial, it's also basically wiping Scotland, Wales, and Northern Ireland out of the equation, much less the rest of the Commonwealth countries of which they'd be sovereign. Unless in this world Canada is independent and reigned over by King Bieber and Queen Avril Lavigne. But apart from all the other absurd aspects -- I'm SO SURE the paparazzi got up to the front door of the freaking palace -- I think it's completely possible to love both the real and the REAL FAKE royals, because this show is just pure soap. It exists in its own galaxy. It has populated the planet Crackfest. It's almost pointless to note all the things about it that make no sense, like the heir to the throne crowd-surfing at a public appearance to distract from how his sister is walking around smoking a joint. It can be maddening sometimes, but then again, look at a show like Nashville. That has all the elements of a soap but nobody lets it go there. Or Downton Abbey. We all WANT it to be a soap, but Julian Fellowes refuses to acknowledge that's what it is, so he leaves all this potential for real drama on the table. In that sense, it's a relief that The Royals is so unabashedly trying to be your dirtiest, guiltiest pleasure. It wants to be Gossip Girl but about people who happen to be royal, and as such, its hands are in the air like it just don't care.

What do you think of the two princesses who are obviously cruel parodies of Eugenie n and Bea, the York princesses?

Heather: Acting-wise, I think they're the only two people other than Elizabeth Hurley and Evil Uncle Cyrus who quite realize what show they're on -- kind of like how nobody in Showgirls except maybe Gina Gershon seemed to understand what that movie was really going to be. The actresses are COMMITTED. The writing for them is so broad and bawdy and tacky, though, that it does make me feel sorry for Eug and Bea. I don't know anyone who thinks they are quite as fatuous as the fictional ladies, although they DO seem to have in common a sense of being tangential to the action. I really took issue with a joke in Sunday night's episode, though. The two of them came upon a famous swimmer whom the princess's security guard knocked out, and once they established he was not dead, they dragged away his fully unconscious body while saying things like, "I always wondered how I'd lose my virginity," and, "Tonight's the night." That is basically a rape joke. It's gross and totally crosses the line from camp into crassness and well beyond. It's not edgy; it's embarrassing. And idiotic. Same with the princess being blackmailed into sex. To put it super maturely, it's icky.

Jessica: Yes, I thought that was totally unnecessary.  Setting that aside, I do find the genesis of those characters to be quite mean. But I agree that Hatty Preston and Lydia Rose Bewley have good comic timing and really liven up the joint -- they're funny, the're costumed amusingly...basically: I think it's both really unkind, and they also might be my favorite part of the show.

Are there any members of the royal family you wish were the inspiration for characters?

Jessica: I am not sure if they have room in the cast for another character. I will say, though, that as I understand it, the original source material for this show was a YA re-telling of Hamlet, so I am just waiting for someone's ghost to show up and start monologuing.

Heather: I would say the Queen Mum, but then again, I wouldn't want her memory to be dragged into this.

What do you think of William Moseley as the prince?

Heather: He is an extremely limp stalk of celery. The wettest of wet blankets. He has the charisma of that tree in your front yard you want to get rid of because only a third of its branches bother to do anything and the roots are tickling your sewage line. If you need me to be less cryptic: I'm not a fan. He's insufficiently dreamy to me, and they keep styling his hair to look vaguely like '90s David Spade (although I'm not sure there is any OTHER era of David Spade). It's all just weird.

Jessica: I think he's cute enough -- he's got that Eau d'William they're clearly going for -- but I do find him to be a bit of a blank slate. Is he (as you'd guess from the crowd-surfing) an impetuous party boy who never had to take his royal duties seriously because he's the spare? Or is he sensitive and shy (which sort of seems to be how they're playing it)? I can't quite get a handle on him. I don't think he's bringing as much to the table as Alexandra Park is, certainly.

Your upcoming novel The Royal We is also inspired by the royal family. How much of their story did you borrow from?

Heather: Quite a lot of it. You don't have to LIKE the royal family to enjoy it, but we drew up its underlying themes after a conversation we were having about Kate Middleton, and how challenging her position must be. However she got around to meeting William at university, the fact is she did, and they've ended up together, and if you stop and think about it she really gave up a LOT of things in order to have that life. If she had married some dude named Steve from North Carolina, she might have an entirely different life and wardrobe, with no boring beige patent round-toe pumps and skirts at a Queen-approved length. She might have more friends. She'd be able to take her kids anywhere she wants, whenever she wants. She might wear yoga pants to the store and openly be able to buy condoms, or pregnancy tests, or six bags of Ruffles. She can't do that now. The life she picked could be surprisingly lonely, for all its advantages, so we built a story based on the theme of how much of yourself you give up just from falling in love. So, we got plenty of inspiration from the real thing.

Jessica: Having said that, it was really important to us to make Bex and Nick, our protagonists -- and all the people in their orbit, royal or not -- their own characters. While they are in Wills and Kate's positions, they are not Wills and Kate, and the story we tell, although absolutely inspired by that real life courtship, is otherwise highly fictional. There's plenty in there that royals watchers will recognize and hopefully enjoy, but you can come into the book knowing absolutely nothing about the royal family quite easily.

Who are your favorite members of the royal family?

Heather: Well, apart from all the super fascinating dead ones (Edward II reportedly died via a hot poker rammed someplace private), I will always love William and Harry. But I have to confess: I have a weird fondness for Princess Anne. Maybe it's not weird at all, actually. But she's kind of The Forgotten Windsor, given that she passed on titles for her children and she stays out of the limelight. And the Queen gave her the title "Princess Royal" as an honorarium, because of all her philanthropic work, AND she's an accomplished equestrian who birthed an Olympian. Anne just puts her head down and gets it done. We also have a running joke on Go Fug Yourself that Anne -- who specializes in highly suspicious and/or skeptical expressions -- actually spends her time ferreting out wrongdoers and solving high-society crimes. That's what really sold me.

Jessica: I, too, obviously love William and Harry. Part of the reason I think they, and Kate, are popular with Americans is that we've born witness to so much of their lives. The British royal family is like an incredibly long-running soap opera for us Americans, in many ways -- they aren't politicized here, the way they naturally are in the UK; we've even been briefed on all the juicy bits we missed over the last thousand years in school. And having seen the tragic way their mother's life unfolded, I think it's natural to have a fondness for them and want happiness for them. I think one of the reasons that Americans were so into William and Kate's wedding, for instance, was because in many ways it felt like a happy ending to a story that had, until recently, had so much sadness in it. And it felt very apt that someone whose parents were strong-armed in many ways into a marriage that was ill-suited to both of them, for the sake of propriety and appropriateness and tradition, got to marry the person that he chose for himself. Even just as a story, that's satisfying. To see it play out in real life, even more so.

Who are you favorite characters on The Royals?

Heather: I enjoy Queen Helena because Elizabeth Hurley -- and her character itself, actually -- is the only one who seems to be having any fun. King Simon seems like a nice guy, but misplaced on an E! show, and in fact the actor almost plays him like he is hoping the show is on PBS. Sorry, good sir. No important-sounding consonants in the name of THIS network.

Jessica: I agree. Obviously, we're all just marking time until Joan Collins shows up --- although they've made her the "Grand Duchess of Oxford," which is MADDENING; Great Britain doesn't have any Grand Duchesses. Is Oxford a whole other country in this universe? See what I said about how I'm trying to unclench? I am bad at it -- but until then, Hurley is sincerely a hoot. I didn't realize I'd missed her until we got her back.