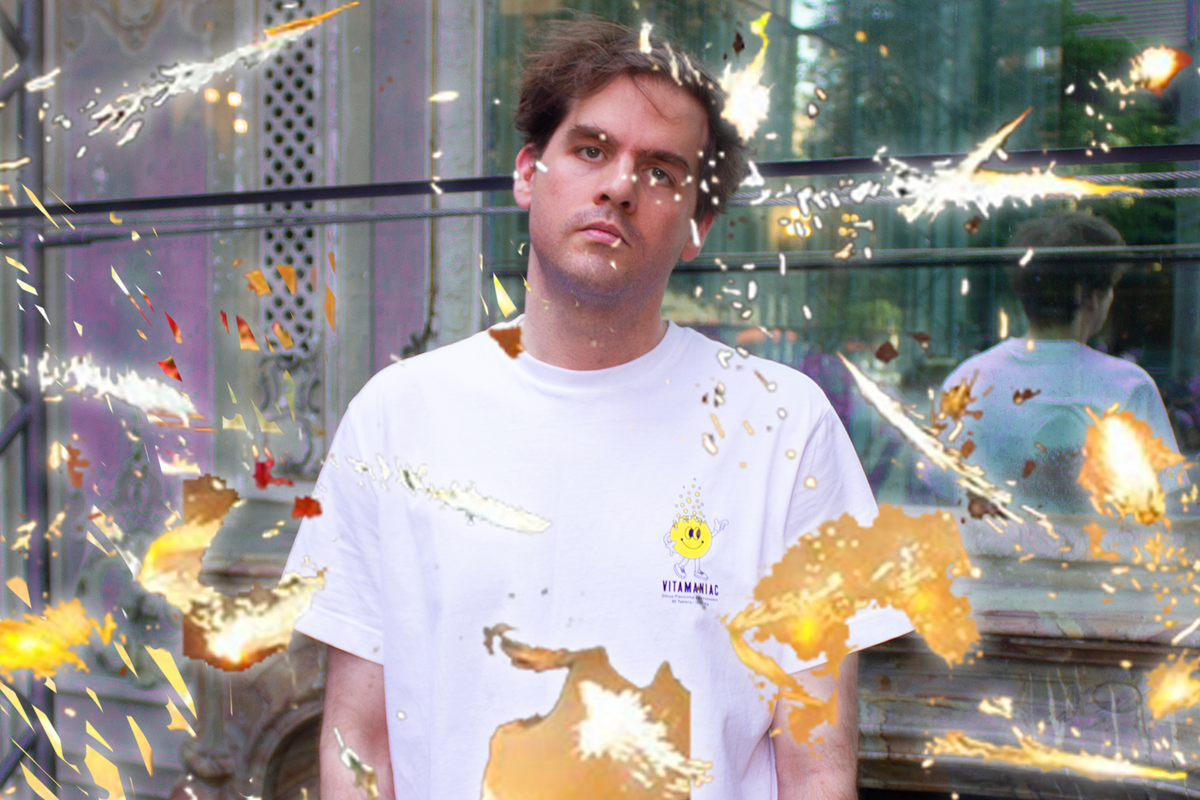 HDMIRROR's Push Towards a New Extreme

You don't need to have watched the 1984 heavy metal comedy, This Is Spinal Tap, to be familiar with its most over-quoted scene. In the film, guitarist Nigel Tufnel of the fictional band Spinal Tap shows off his custom-made speaker with knobs that go all the way to volume 11. "Why don't you just make 10 a little bit louder?" asks filmmaker Marty in the scene to which a confused Tufnel can only respond, "but these go up to 11." Turning things "up to 11" has since become pop culture shorthand for exceeding something's upper limits — louder than the loudest you've ever heard.

Like Darude and Aphex Twin thrown into an industrial blender, Berlin-based producer HDMIRROR's music is similarly extreme. Every song off the artist's latest album, ART OF DESTRUCTION, is delivered with the highest intensity, whether that be through grating saw waves laid on top of disembodied screams or through the break-neck speed with which he cycles through genres like trance, hardstyle, gabber, and rave. His closest contemporaries range anywhere from the rubberized squelches of SOPHIE to trance pointillism of composer Lorenzo Senni, all with a cerebral approach to re-contextualizing the high gloss sounds that have defined pop and EDM for the past couple of decades and pushing them to almost grotesque places.

HDMIRROR's sonic intensity is only rivaled by his equally dense visuals full of strobes, abstracted corporate logos, supersaturated collages, and superimposed jpegs bleeding into one another. It's like the entirety of the internet being broadcast all at once — a collapsing of information into one densely packed moment. The video for "LOOKS LIKE RAIN" features an endless string of intricate heavy metal logos flashing in ceaseless succession while blurred out footage of a mosh pit slowly shifts in the background. By playing with extremes, HDMIRROR presents everything in their most raw, undiluted form. In the end, extreme is just another aesthetic — an "11" painted on the end of a dial.

PAPER caught up with HDMIRROR ahead of the premiere of the new visual for "LOOKS LIKE RAIN" to talk raves, giving up on EDM, and how the producer assembles his extreme music.

Do you remember the first proper rave you ever went to?

Of course. I was well underage when I started going to raves. I don't know how I got in, but I was determined and somehow managed. It was at a venue called Three Arts Theater in Cape Town, which seemed huge to me at the time. There were multiple dancefloors and chillrooms and lasers everywhere. It was a multi-layered audiovisual experience, which was very abstract compared to what I've experienced before. It was a whole new language and it obviously shaped my outlook on music quite drastically.

Is EDM worth saving?

I think EDM has reached the end of its natural cycle so there's probably no need to save it, it's been absorbed into popular music at this point. When EDM first appeared I couldn't stand it, however I have come to appreciate some of the production techniques they use. I like how the synth sounds have a physicality to them and how offensively abrasive and digital the sound is. It's definitely not "retro." It has a completely different philosophy that is basically like "rave" that fully embraces capitalism and commercialism, as seen in that KFC ad on the Ultra mainstage. Its the ultimate postmodern nightmare. That and the banality of it is quite interesting, but its run its course.

Both metal and electronic share "hardcore" as a subgenre, in your eye what are the similarities between the two? In what ways do you see an overlap or, conversely, a dissonance?

Yeah there's definitely similarities. For me the best metal is almost transcendent. I like it when there's a kind of beauty behind the scream. The same goes for electronic music. That magic point between sad and euphoric is where the similarity lies. Metal has that feeling of letting something out or letting something go, when dance music is good it has the same effect.

How would you describe your approach to making music?

One of the main aspects of my work is that it is not nostalgic. There has to be some kind of a future in music. I work quite fast and in a kind of free association, I don't try to make the perfect track, I try to capture an idea and bring it into reality. I'm trying to create an all encompassing sound that stretches over a wide range of bpms and multiple levels of emotions. Each track I make is a reaction to what came before it. I make what I feel is missing in my sound. At the moment I'm very interested in how music is mixed. People often underestimate the aesthetic choices of a mix, feelings can be conveyed by how loud or soft certain elements are in a track. For example, a lead sound that is clipping and struggling to be heard in a mix can exaggerate feelings of energy and euphoria. I make the music to sound like how it would sound if you were in an elevated state. Its almost like watching someone on YouTube play videogames instead of playing them yourself.

What is the process like for determining the visuals that accompany your work, how do you go about making them? Is there a guiding philosophy?

When I am producing I am usually online and often scroll through images and videos during the music making process. The feeling of a certain aesthetic would kind of be baked into the music. The video I did for the track "HOW LARGE" has a lot of actual screenshots of what I was doing and listening to while making the track. The visuals reflect the multi-tasking hyperconnectivity of our daily lives. I give myself a limitation to only work within a certain aesthetic theme or color at a time that can be expanded upon. The visuals tend to lean toward extremes. It's almost always something breaking or something close to breaking as well as feelings of surrendering to something. My music often alludes to information overload, the stroboscopic style that is prevalent in my work is how I personally envision how others hear the music, kind of like neural fireworks. Flashing logos and symbols appear detached from their original meaning, it gives a feeling of overwhelming complexity.

I was wondering if you could break down the visual for "LOOKS LIKE RAIN" what's going on and how it ties back to the track.

The track to me is black metal without any black metal sounds. I wanted it to be very synthetic sounding. The track has a cathartic feeling, its dark but kind of euphoric. I used a visual of a mosh pit at a metal concert (as source material) and processed it beyond recognition to the point where the viewer isn't sure what they are looking at, like a POV perspective of someone under the influence of something unknown. There's a feeling of witnessing something holy, the flashing black metal-like logos are all nonsensical and illegible. Usually those type of logos are drawn by hand but these ones were made using Illustrator and were distorted. Some of the logos are literally just randomized noise but they capture the feeling of black metal (to me). I'm sure any true black metal fan will hate it.

What is it about these trance/hardcore/hardstyle-type sounds that you use that appeals to you?

They are very emotive and effective. Trance leads are one of the easiest sounds to recontextualize and one of the easiest sounds to make on a synth, its literally just a detuned saw wave, it requires almost no skill. Like 50% of the presets on VST synths these days are trancey. So that simplicity is quite "punk" in my opinion. The appeal in using them is to trigger a sense of familiarity while the exact opposite is actually occurring. They function as a kind of Trojan horse in order to introduce new elements that people aren't necessarily used to.

When was the last time you experienced euphoria?

Fairly recently. I experience varying levels of euphoria on a regular basis when listening to (and sometimes making) music. I often have quite intense listening sessions where I get really into it. I've had legit euphoria while working on a few tracks like "ALWAYS TOO LATE" and "ASHES" on ART OF DESTRUCTION. I would add that Chemical Brothers at Sonar 2010 and SOPHIE at Berghain 2016 were two times when I completely lost my mind and haven't been the same since.

The future of mainstream music is gonna sound quite boring I think. There will be ''late stage Spotifycore'' which will be made by AI to match a persons emotions on the fly. It will probably sound very simple and made for background only purposes. When you are happy you will hear happy music, when you are sad you will hear sad music, automatically. (See Liz Pelly.) The future of underground club music however has the potential to be insane. If everything goes well, music will become more like an aural experience. The sounds will sound so realistic that people will be looking around wondering if it's playing or real life. Almost like a kind of theme park ride.

As far Art of Destruction goes, what was the inspiration behind the release? What do you hope people take away from it?

Part of the inspiration was to capture the feeling of when I was a teenager and discovering a new release from an artist I like. That feeling of when a new album has an unexpected theme or subject matter and challenges the expectations of the listener. Albums like Photek's Solaris, for instance, was a huge change in aesthetic but somehow was even more Photek than ever before. That feeling of discovery and excitement was the main inspiration. You could say its a meta commentary of the feeling of discovering music, that's part of the reason why I chose one of the least likely tracks "LOOKS LIKE RAIN" to be the first video, to make the listener feel 'unsafe' like anything can happen next. The effect of the music is more important than the message.