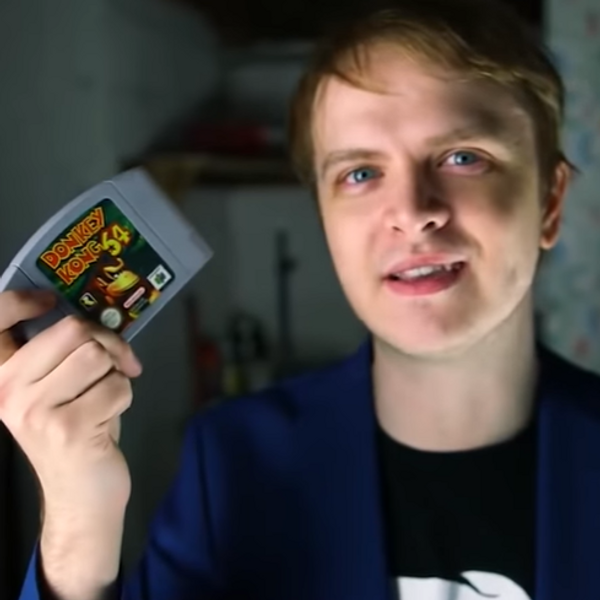 Spite can be a powerful motivator. It's partially what lead Twitch streamer Harry Brewis, better known by the handle HBomberguy, to stream Donkey Kong 64 for 57 hours straight with the sole aim of raising money for the United Kingdom-based charity, Mermaids, just to get back at British comedian and writer Graham Lineham after he nearly jeopardized the organization's funding.

Leading up to the stream, Lineham had previously referred to Mermaids, a charity that provides support, outreach, and resources to trans youth, as pushing "an extreme ideological agenda" and has generally been a vocal critic of letting trans youth have access to the proper medical care they need. So when Mermaids was awarded funding earlier this year, Lineham directed his followers to an email campaign that bombarded the National Lottery with complaints forcing them to suspend the charity's funding pending further review. Upon seeing this news, Brewis did what any rational human being would do and dusted off his old Donkey Kong 64 cartridge.

In a video posted to his Youtube page, Brewis outlined the premise for the fundraiser with the aim of raising as much money as he could over the course of collecting every golden banana in the classic Nintendo 64 game. With over 300,000 followers on Youtube, Brewis started the weekend off strong by raising over $50,000 in the first 24 hours but that was only just the beginning.

Word about Brewis' altruistic crusade began to spread across Twitter and soon enough people like Chelsea Manning, author Chuck Tingle, and Doom co-creator John Romero had popped in during the stream as guests to show their support. Even freshman congresswoman Alexandria Ocasio-Cortez dropped in to chat about how she used to play a lot of Donkey Kong 64 on her cousin's system growing up. She even went so far as to say that it was games like Super Mario 64 and Pokemon Snap made the console "probably the best system out of all of them."

Celebrities like Cher and Neil Gaimen also tweeted the stream out to their followers and by the end of Sunday night the stream had raised a staggering $340,000 for Mermaids. And while Brewis' stream may have made headlines for its marquee lineup of guests, it was the constantly rotating cast of trans, non-binary, intersex, and gender-nonconforming activists, artists, and creators educating and sharing their experiences throughout the weekend that really underscored the importance of the cause.

After having finally recovered from the marathon game session, we caught up with Brewis to reflect on everything that went down over the weekend.

How are you feeling now that the stream is all said and done?

After having two long sleeps, the parts of my brain that fell off about 18 hours in and would have thought of smart questions are coming back and saying 'WHAT ARE YOU DOING?!' I'm partially very happy I got to be that out of it and ask a future president how to beat an N64 game but I'm also annoyed I didn't get to talk politics as hard as I'd liked. I should have asked Romero about Doom 64, an incredible interesting and special Doom project.

At what point did you realize things were beginning to blow up?

I should have realized immediately, when my early setup where I made sure everything worked ran long, and before I started the timer I'd raised $500. But, frankly, I'd assumed not a lot of people really cared about trans issues, and didn't want to get my hopes up, pretended something magical wasn't happening and that brief burst would end and then the long haul of playing the game would start and it wouldn't be so fun any more. At about $75,000, when we'd caught up to an amount of zeroes I'd accidentally typed in earlier by mistake, it suddenly slapped me in the face that I was so, so wrong, it wasn't going to stop, people care, and there's so many thousands of them. I felt for the first in a long time like I was surrounded by a world where there can be justice. Even typing that made me tear up a bit just now. I've never been so happy to be wrong. Or, no, I've never been so happy. This proved something about humanity's kindness to me I'd long since settled in another direction, and I think I'm coming out of this a very different person than I went in.

What were some of the things you took away from the experience?

I learned a lot of things about the experience of being trans, I learned just how much being there and listening and being friends with someone can matter. I learned how important and powerful community can really be, properly learned it, in the deep animal part of my brain that needs visceral proof and not the intellectual understanding of it. I learned how to scare a 3D model of a beaver into a pit.

One thing we learned in real-time, we learned how to handle a large stream with a large guest list. So many behind the scenes people, Shannon Strucci, Dan Olson, and Casey Explosion in particular, absolutely moved heaven and hell to make things reach the peak they did and they did it for free, without being asked, and stayed up later and longer than me. I learned that I am utterly surrounded by heroes who are just waiting for an excuse to make a difference.

How mad do you suppose Graham Lineham is now?

Very mad and I hope he continues to try to destroy trans people online in such a comically inept fashion. It's literally an episode of Father Ted; "The Passion of Saint Tibulus."

What would you like to say to your fans, old and new, now that the stream is over?

I wish I'd ended by staring into the camera and saying 'well, I guess we have to save the world now.'