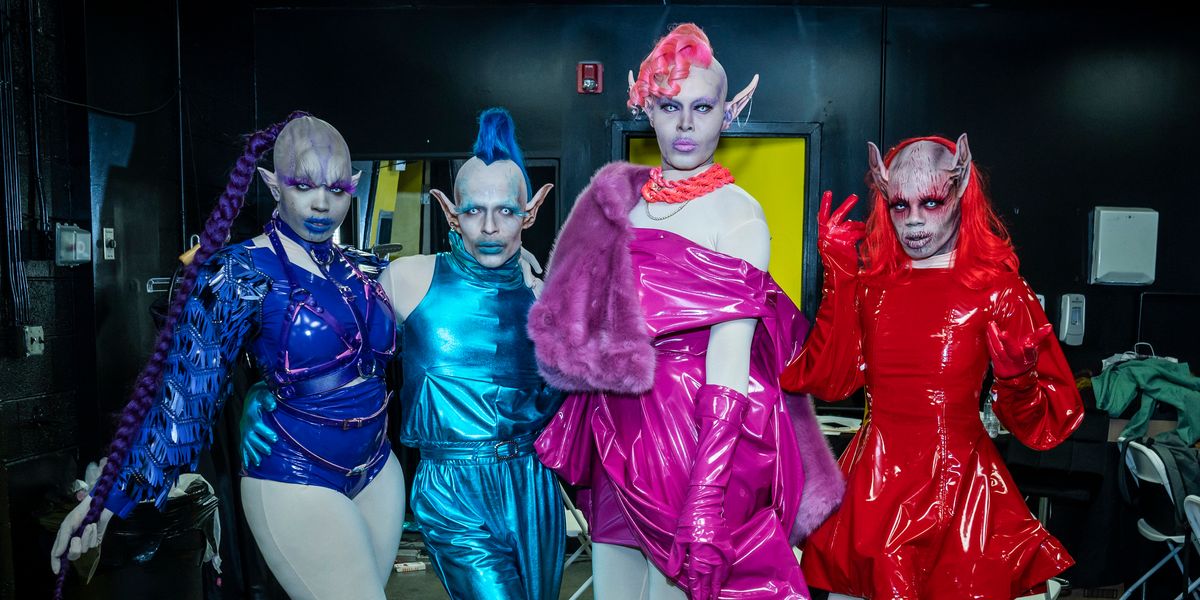 The debut season of Legendary was a full-throttle, high production exploration of ballroom as a televised competition. In fact, it was the first of its kind. Viewers tuned in every week for a series of voguing battles, as well as the occasional reading session between judges. But throughout it all, fashion played a major (sometimes central) role for the HBO Max series.

And much of that work was led by the show's costume and creative leads, Johnny Wujek and Eric Archibald.

"I grew up in ballroom," Archibald tells PAPER. "My first ball I ever went to was in 1989; it was one of Paris DuPree's balls." Archibald would go on to begin walking categories two years later, before eventually going on to work on projects for Beyoncé, Lil' Kim, Janelle Monáe, Busta Rhymes and more. But his interest in fashion was sparked, in part, by this underground community. Within it, Terri Milan was his house mother and Paris DuPree was her mother — DuPree is often credited as having invented voguing, and started the Paris is Burning series of ball from which Jennie Livingston pulled the name of her 1990 documentary.

"My first ball, I was blown away," he says. "I saw Pat Fields walk leather versus suede in a green shearling that I still remember to this day. I was in love. I fell in love with my first couture designer at the time who was Jean Paul Gaultier. These two young men walked Labels and they had on the most incredible pieces from the Gaultier cage collection. I went home and all I could do was scream, 'I love Jean Paul Gaultier.'" In ballroom, Labels is a fashion category where contestants wear high fashion designer brands to compete against one another.

Wujek, who has notably worked with Katy Perry, Nicki Minaj, Britney Spears and more, had a different experience. While Legendary provided him with his first in-depth look at ballroom, he caught glimpses of it through the local Detroit scene during college. His roots, though, are more ingrained within the raver scene.

"Working with Eric was amazing because he had this experience and so I could get the inside scoop without looking silly in front of the kids," Wujek says.

Still, Legendary provided a Herculean, almost insurmountable task for the pair. They had to lead the dressing of up to 40 performers, in addition to two judges, pulling out multiple looks in time frames that were as short as two days at some points.

"There was no time," Wujek says. "We were having to do reveals live onstage that we had never rehearsed before." Quick turn around meant that at times they were rushing looks from one building to another and getting them on performers five minutes before the category was called.

This was all done in collaboration with the houses, who came in with different points of view. While some wanted to look "fabulous," others had more specific visions for how they wanted to appear. Take the House of Balmain, for example. At a Superheroes-themed ball, Gravity Balmain wanted to give an ode to their queer ancestors.

a little backstory behind this look —

For the superhero ball, I wanted to pay homage to real superheroes within this community. I referenced the activist group Act Up — a revolutionary group from the 1980s that used art, protest, and mass demonstrations during the AIDS crisis pic.twitter.com/LEvmKZyRj2

"I wanted to pay homage to real superheroes within this community," they wrote on Twitter. "I referenced the activist group Act Up — a revolutionary group from the 1980s that used art, protest and mass demonstrations during the AIDS crisis." To integrate this into their costume they requested for the organization's pink triangle, as revealed in the thread. While that was incorporated, the Act Up slogan "Silence = Death" was not.

"We were really running around the Garment District sourcing fabric and waking up at 3 AM to pick up looks," Archibald says. "It was like being on acid."

On Instagram, Wujek shared that some of his favorite looks included Eyricka Lanvin's take on Maleficent of the first episode and Leiomy in the Circus Bezerkus ball. And as for some of the most difficult: the Intergalactic themed ball of episode six where contestants had to do a performance while wearing a bizarre-themed outfit.

"Those looks were hell," Wujek says, referring to costumes for the houses of Balmain and Escada. Balmain's four house members became components to an overall living dress worn by house father Jamari Balmain. On the other hand, the House of Escada came as fantastical, alien flowers. "It was like 10 people sewing leaves and petals onto those things at the last minute. It was all hands on deck."

Ultimately, as Archibald says, "It really was a labor of love at the end of the day."