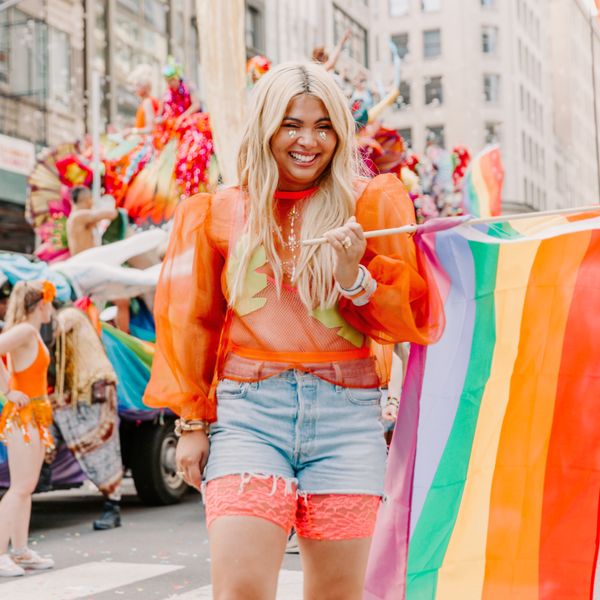 Now that all the confetti has settled and the glitter has washed off from this year's Pride, it feels like the perfect time to take stock of where we're at and where we need to go next. Following a year that saw the release of her highly anticipated debut album, Expectations, Hayley Kiyoko is understandably feeling pretty good about herself. Dubbed by the artist as "20gayteen," last year not only saw Kiyoko collaborating with the likes of Kehlani and dueting with Taylor Swift, who would later invite her to be in the music video for "You Need To Calm Down," but also had her walking away with a VMA for Best New Artist.

It's the morning of World Pride and Kiyoko is now gearing up for a personal first. As a Pride Ambassador for W Hotels, the pop star is set to ride atop the company's float in the New York Pride parade as millions gather along 5th avenue to celebrate the 50th anniversary of Stonewall. If she's nervous, she surely doesn't show it as she warmly greets guests gathered for a photo op the morning before the parade. Even a four-hour delay in the parade start isn't enough to phase Kiyoko; as soon as we embark on the planned route, she's hopping on and off the float to take pictures with eager fans pressed up against the barricades.

Often referred to as the "Lesbian Jesus" by her fans, the gravity of the moment doesn't appear to be lost on Kiyoko. She admits she wasn't always the out and proud queer woman she is today, but it's clear that she understands her place now as a role model for those still coming to terms with their sexuality.

PAPER sat down with Kiyoko to talk about Pride, what the music industry needs to do for queer voices, finding LGBTQ+ spaces while traveling, and what lies on the horizon for the singer.

It's been great. I've been working on my new music and getting ready for this next chapter, which has been super fun. Today's just really cool. I've been reflecting on everything. I've never felt the energy that is New York City during Pride. The energy here is so inclusive, positive, and hopeful. I was getting emotional yesterday walking around. I feel really lucky to be here.

What's been a highlight for you in the past year?

Things like this have definitely been a highlight. Having the opportunity to be surrounded by people that love you and support you, and it's hard because some people don't get the opportunity to be surrounded by that. They see it on social media and they're like, "Aw man, I wish I could be there." So I feel very grateful that I get to experience it and get to be there first hand, and hopefully share that with others, and eventually they'll get to experience that as well.

Personally, how have you seen Pride change?

My first Pride was in Vancouver; my friend dragged me there and I had my head down the whole time because I didn't want anyone to know I was gay and that I was there. I thought that if I was proud of who I was then people would judge me. Now I'm going to be waving in a parade — proud to be who I am and celebrating that. It's been a long journey, but it's been very exciting. It's very empowering to be a part. Every Pride, having it annually and pushing yourself a little bit further every year to love yourself more is amazing.

How have you seen the music industry change towards its attitudes of queer women?

I feel the music industry has become more progressive in the past two years. More artists are open with who they are, and proud of who they are. It's definitely been a major difference. Even when I began the music journey, I had no idea I was going to be so outspoken with my sexuality. Now that's a part of who I am and empowering others to be themselves.

What is your hope for the future when it comes to the music industry?

I hope that everyone can listen to everyone. I think right now it's still like, "Oh, you're a gay artist... only your community listens to you." I feel like hopefully, we'll be cross-pollinating as far as listening to different types of music whether you're in the community or not.

What I'd love to see more of is all these brands potentially supporting Pride to actually be an advocate and to actually donate their bajillions of dollars to charities that are doing real change. If you're showcasing a flag or you're selling a flag, you should be actively doing something in the community. That's probably something that I'd like to see more because I think we're still very on the surface level.

What does "gaycation" mean to you?

I don't know, being surrounded by gay people? Honestly, I feel like I'm on gaycation right now. I went out to dinner with my best friends last night and they're not gay, but they're extreme allies. To me, that's a gaycation; being able to be myself and knowing that the people I'm with love me for who I am.

You obviously travel a ton as an artist. When you're going to a new place, do you try and scope out where the LGBTQ scene is? What makes you comfortable in the new locale?

Normally, the scene comes to me when I travel, so I don't really have to seek it out too much. But it is really interesting to travel and see that there's people like me everywhere. You kind of forget and then you're in Switzerland or Iceland and they're like, "We love you. This is our group and we all hang out, and this is where we go." It's just really cool to see that there are safer places for people to gather.

I have new music on the way. I just got back from Joshua Tree and was writing a bunch of stuff in the desert. This year is going to be a lot about getting my content done because I was on tour for the past year and it's really hard to do both at the same time. It's great. I don't know how else to say it without sounding like a dick. It's really great. You'll like it.