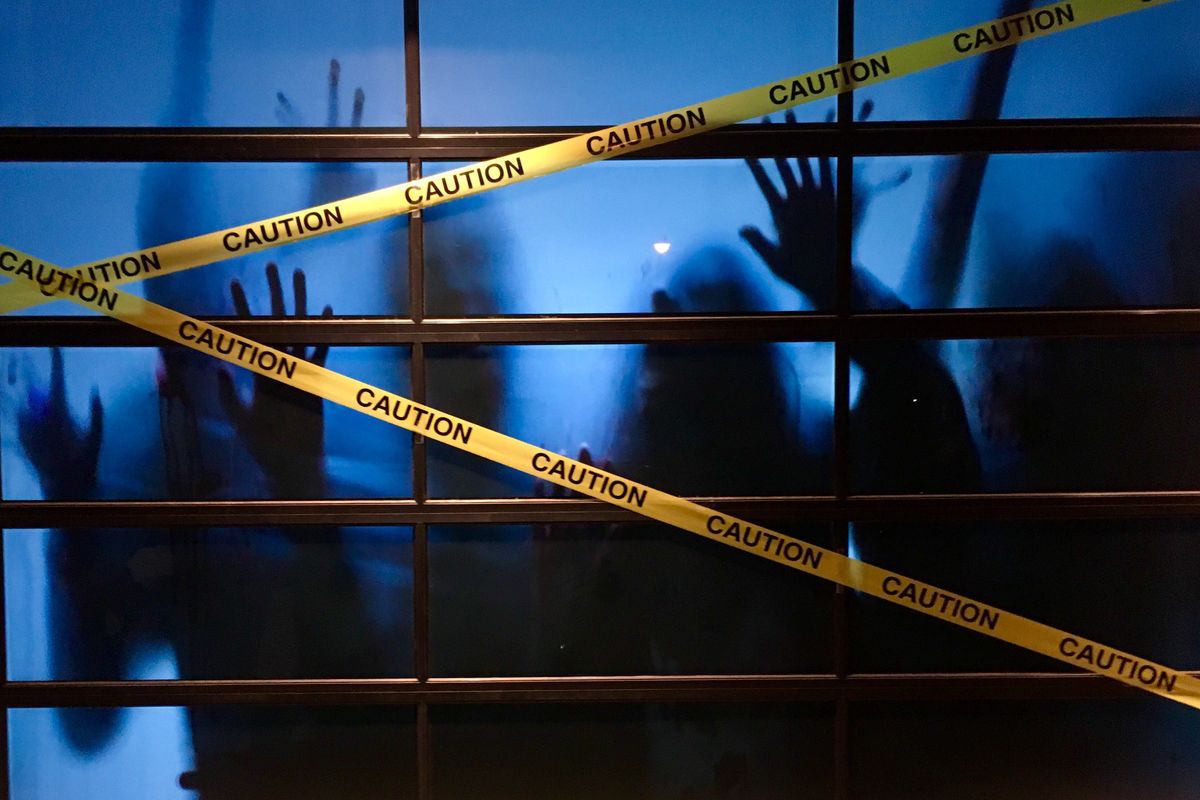 A Peek Into The Haunted Past of Ghostly NYC

The Brooklyn Bridge is one of New York City's finest monuments, a structure that serves as a testament to human will and ingenuity. When it was first opened in 1883, it was considered the eighth wonder of the world, the longest suspension bridge ever built. And tons of people died doing it, so the thing is chock full of ghosts. The architects of "the Bridge of Death" suffered grisly fates due to its construction, and several workers died. One was brutally decapitated, and it's said that his ghost haunts the structure, a headless phantom floating behind taxi cabs.

On a crisp October evening, I was informed of the many tragedies of the Brooklyn Bridge by Andrea Janes, founder of Boroughs of the Dead, a five-year-old ghost tour company in New York City. Janes was escorting me and a group of spectrally-minded people around Brooklyn Heights for a tour of its most haunted landmarks. And Brooklyn Heights, a moneyed neighborhood just over the bridge from Manhattan, is not scary. It is beautiful, a series of tree-lined streets and heavenly brick townhouses full of collectible art and expensive children's toys. Walking around that neighborhood on a brusque fall evening, the glow of the sunset matching old-timey street lamps, is idyllic, even romantic.

Related | A Tour Through the Deadly Streets of Hollywood

But Janes — who is an ideal tour guide, friendly and endlessly knowledgeable — provided ample scaries. As we gazed at "the lingering ghosts of a blood-red sunset" (she is, unsurprisingly, a writer), she took us through the darkest spots in the neighborhood. There was the house where Truman Capote penned the true-crime classic In Cold Blood, and the apartment where canonical horror writer H.P. Lovecraft invented Cthulhu, a monster inspired by the creepy-crawlies of subway tunnels.

There was the bridge, which Janes referred to as a "mass murderer." We stopped by the house from 1977 horror movie The Sentinel, in which a gorgeous Brooklyn Heights home served as a gateway to hell. And there was my favorite, the "House of the Sibling Suicides," a home on Atlantic Avenue where a sister and brother both took their own lives, the sister rumored to be in an occult sect that involved bathing in one's own menstrual blood. About 20 minutes into the two-hour-long tour, the weather turned freezing cold; attendees eagerly described it as a "ghostly chill."

Boroughs of the Dead normally leads about two tours per week; Janes said that there are always tourists in every city who specifically want a ghost tour. October is, obviously, their busy season.

"I decided to found [the company] because I'm a writer and I write ghost stories for a living, and it was a good way for me to make a little extra money while also honing my skills as a ghost story writer," she told me over the phone a few days later. "And the job ended up turning into a full time job more quickly than I expected, and I just discovered that I really liked it and was pretty good at it, and it seemed to be successful, so I just kept on going."

The company now employs multiple guides, and they have offerings in every borough. I asked Janes what she saw as the most haunted spots in the city; she suggested St. Marks Church-in-the-Bowery, the Merchant's House Museum in NoHo, the old smallpox hospital on Roosevelt Island, and City Hall Park, "where there were burials, and there were executions, and there were hospitals, and asylums, and poorhouses, and you can feel that intense concentration of human energy vibrating in the air all around it."

"We try and find those people whose stories have been overlooked, forgotten, shunted into the back pages and dusty footnotes of history, and bring them back."

Janes explained the difference between a ghost and a haunting, saying that ghosts are actual spirits, departed people, while haunting is just "kind of residual energy." And New York City is very, very haunted.

Though much of the history Boroughs of the Dead covers happened far in the past, Janes is sensitive to the realities of grief. "Ghost tours are entertainment, and they're fun, and we keep things light-hearted and make jokes," she said. "But sometimes our stories just require a more serious tone, because these are real human lives and deaths and lived experiences that we're dealing with."

She is especially considerate when it comes to the deaths of tortured slaves and dock and factory workers. "We cover people who suffered mental illness, people who suffered loss, people who suffered grief, the death of children," she said. "So we try and keep our tours adult. Not because we want to be salacious about the content, but because these themes are actually very heavy. On our lower Manhattan tour we talk about slave uprisings and executions. This is very serious material, so we don't want to talk about it to kids because we don't want to dumb it down — we want to explore it in all of its nuance."

She continued, "We have a little quotation written on the back of that bookmark that we hand out at the end of every tour. Its an Edgar Allen Poe quotation where he says we should 'leave aside the great men of history and look for the forgotten, those who died in bedlam or on the gallows.' We try and find those people whose stories have been overlooked, forgotten, shunted into the back pages and dusty footnotes of history, and bring them back."