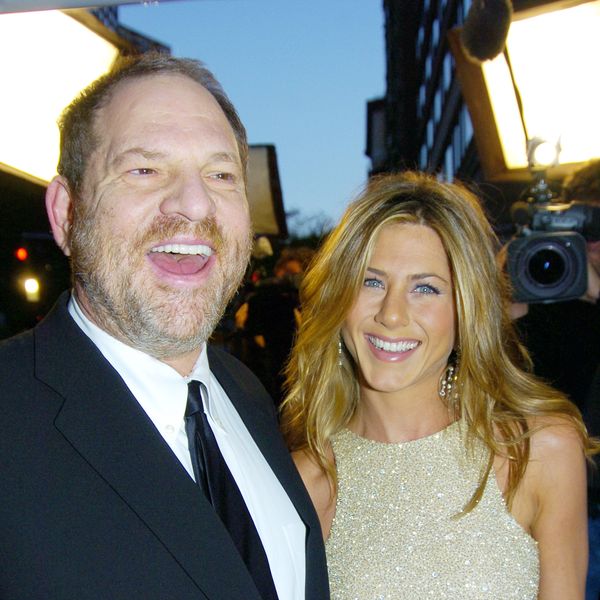 In the lead-up to Harvey Weinstein's sentencing hearing tomorrow, over 1,000 pages of court documents have been unsealed, revealing new depths to his derangement and misogyny. According to Page Six. one particular set of emails from back in 2017 shows that Weinstein threatened Jennifer Aniston after he learned that the Enquirer was reporting on claims he'd sexually assaulted the actress.

"Not sure if you saw this one. Jennifer Aniston," wrote Sallie Hofmeister, a senior executive at the powerhouse Sitrick public relations company, forwarding Weinstein an email they'd obtained from the Enquirer.

According to the emails, the Enquirer had found sources claiming "Jennifer confided to a friend that during the production of the 2005 movie Derailed Weinstein sexually assaulted her by pressing up against her back in [sic] grabbing her buttocks." The source also claimed "Through the years he would frequently stare at her cleavage/ breast and move his mouth around making Jennifer uncomfortable."

"Jen Aniston should be killed," he wrote back, 45 minutes later after seeing the email.

The allegations aren't true, according to Aniston's publicist Stephen Huvane, who provided a statement today to Variety: "The National Enquirer claims are false. Jennifer has not been harassed or assaulted by Harvey.

The documents had a few other juicy tidbits. In one email, Bob Weinstein wrote to his brother: "I pray there is a real hell... That's where u belong."

Other emails show that in the days after the first reports about his predatory behavior broke, he emailed dozens of his most powerful friends and billionaires, including ex-candidate for Democratic nominee for president Michael Bloomberg, Amazon CEO Jeff Bezos and Anita Dunn, a current top advisor for Joe Biden.

Weinstein is already in jail. (Finally, after he managed to avoid it for 10 days by making a detour to the hospital.) After facing over 100 allegations, Weinstein was convicted in February of third degree rape and first degree criminal sex act.

His threats to Jennifer Aniston, a national treasure, make you hope the jury thinks long and hard about his sentence tomorrow: the 67-year-old faces a minimum of five years in prison and a maximum of 29.