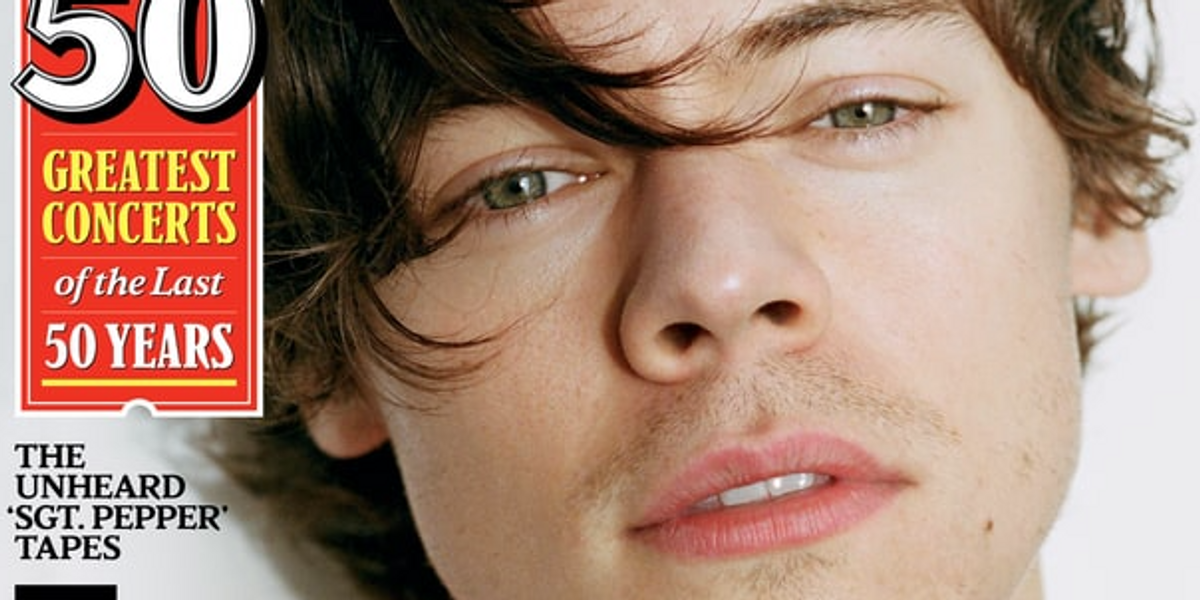 In case you haven't heard, Harry Styles is very much flying (literally) solo and assuring everybody he's very good at doing so. With this comes, of course, the in-depth profiles and for someone that was essentially never allowed to speak during his tenure with mildly successful boy band One Direction, this seems to be a whole new world.

Rolling Stone were among the first to snap up Styles for a solo cover, written by director and former teen music journalist Cameron Crowe. In it, Harry is very much the lovely, self-aware, British cherub we all know him to be. Not only does he approach Crowe's fishing in a way that is careful but unquestionably honest, more importantly, he all but clarifies that nothing is off-limits.That means responding to once-bandmate's Zayn Malik's post-One Direction comments. That means revealing his relationship history, specifically, what went wrong. That means weighing in on his teenage girl fanbase. There's a lot of juice.

Ironically, when addressing of the passion he inspires in teenage girls is the single part of the profile that Harry appears the most passionate. He doesn't want you to belittle the taste of young women just because they are immature or overzealous, likely because that implies that the music they like, his music, is as silly as they are.

"Who's to say that young girls who like pop music – short for popular, right? – have worse musical taste than a 30-year-old hipster guy?" he says. "That's not up to you to say. Music is something that's always changing. There's no goal posts. Young girls like the Beatles. You gonna tell me they're not serious? How can you say young girls don't get it? They're our future."

"Our future doctors, lawyers, mothers, presidents, they kind of keep the world going. Teenage-girl fans – they don't lie. If they like you, they're there. They don't act 'too cool.' They like you, and they tell you. Which is sick."

As he goes on, Harry inadvertently reveals this is clearly the part he found most grating about Zayn Malik's autopsy post the One Direction-demise, where the now RnB singer all but said he hated the music the band was making. Malik told the reporter that he if he were on date with a girl, he would "play some cool shit". "I want to make music that I think is cool shit," he said, "I don't think that's too much to ask for."

"I think it's a shame he felt that way," Harry says when Crowe references Zayn's words, "but I never wish anything but luck to anyone doing what they love. If you're not enjoying something and need to do something else, you absolutely should do that. I'm glad he's doing what he likes, and good luck to him."

Harry takes a similar approach when talking about his past girlfriends. While he describes a high school relationship in great depth, saying he "worshipped the ground she walked on", Harry takes time to consider about how he will take on Taylor Swift/he takes a pee, returning to tell Crowe he thought he'd "let him stew" before delving into the Swift saga.

"When I see photos from that day," he says, speaking on when Taylor and Harry were captured out on a date in Central Park, "I think: Relationships are hard, at any age. And adding in that you don't really understand exactly how it works when you're 18, trying to navigate all that stuff didn't make it easier. I mean, you're a little bit awkward to begin with. You're on a date with someone you really like. It should be that simple, right? It was a learning experience for sure. But at the heart of it – I just wanted it to be a normal date."

"Certain things don't work out," he continued. "There's a lot of things that can be right, and it's still wrong. In writing songs about stuff like that, I like tipping a hat to the time together. You're celebrating the fact it was powerful and made you feel something, rather than 'this didn't work out, and that's bad.' And if you run into that person, maybe it's awkward, maybe you have to get drunk...but you shared something."

Styles also addresses a recent relationship adding "she's a huge part of the album". While Crowe surmises Harry may be alluding to Kendall Jenner (who he has been linked to multiple times), he fails to mention New Zealand model Georgia Fowler, who Styles allegedly dated while still seeing Taylor Swift and may very well be the subject of new song "Kiwi" – which is slang for someone from New Zealand.

"She's a huge part of the album," Harry tells Crowe. "Sometimes you want to tip the hat, and sometimes you just want to give them the whole cap ... and hope they know it's just for them."

The whole profile chock-full of juice so if you still need more, head on over to Rolling Stone and read it all.