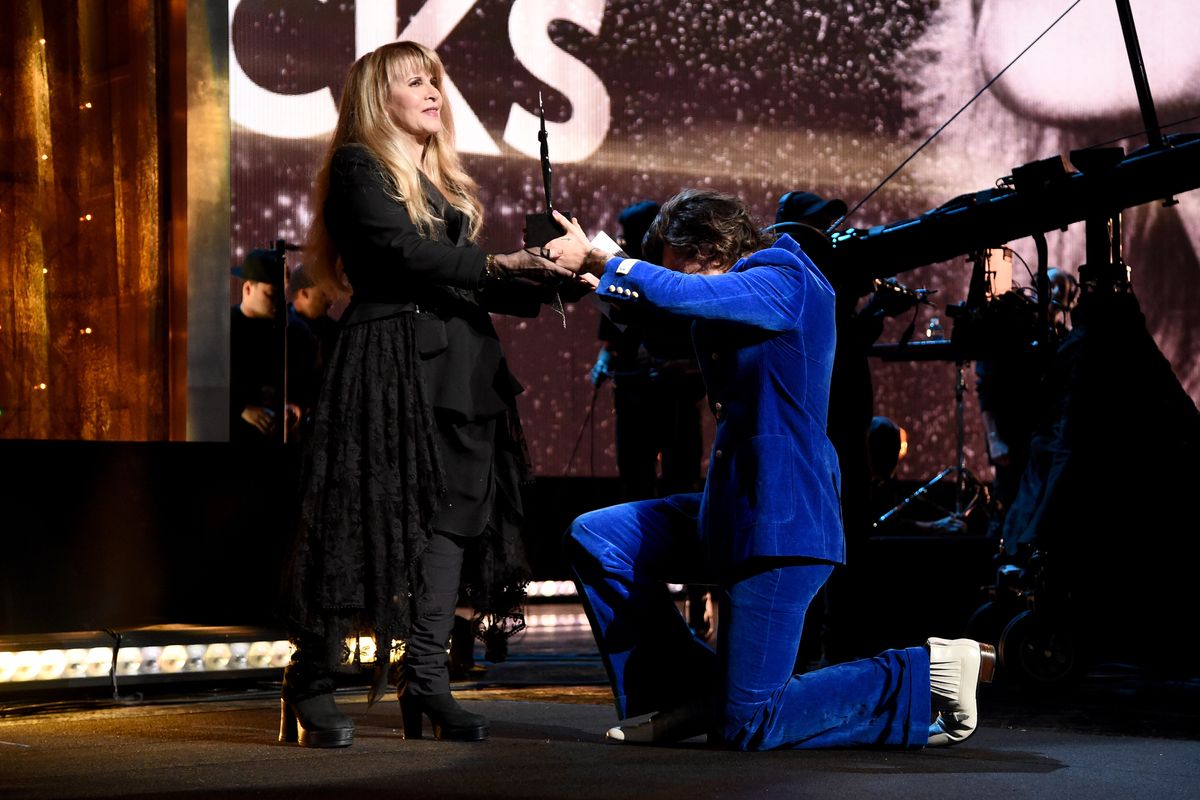 Harry Styles and Stevie Nicks' Friendship Is Everything

Stevie Nicks makes history on Friday night as the very first woman to be inducted into the Rock and Roll Hall of Fame twice — both as a member of band Fleetwood Mac in 1998, and as a solo artist. This year, the singer-songwriter was inducted by none other than her good friend, and all-around dream boat Harry Styles. The two performed "Stop Draggin' My Heart Around" together. And during the "Sign of the Times" singer's introduction, he sang his music idol's praises, and also called her everyone's ideal everything, including the perfect "lover."

Harry began his speech by recalling his memories as a child, constantly listening to Stevie with his family. "We listened at home, we listened in the car, we listened wherever we could. 'Dreams' was the first song I knew all the words to before I knew what the words really meant. I thought it was a song about the weather, but I knew that it was a beautiful song about the weather. I always knew the words and I loved them all."

"She's the magical gypsy godmother who occupies the in-between. It's a space that can only be hers. She's a lot like a rock'n'roll Nina Simone, finding the notes only she can," he said. "And by being so unapologetically herself, she gives others permission to do the same, and that is true Stevie."

He continued, "She is so much more than a role model. She is a beacon to all of us. Whenever you hear her voice, life gets just a little bit better. When she sings, the world is hers, and it is yours. She's everything you've ever wanted in a lady, in a lover, and in a friend. Stephanie Nicks, I love you, we all do, and that is true Stevie."

Afterwards, when Stevie gave a backstage interview that also addressed questions about her friendship with the former One Directioner, she mistakenly calls Harry an ex-NSYNC member, and funnily called herself out as soon as she said it. "Well, we met quite a long time ago actually," Nicks said. "And what I really loved about Harry, was that when he decided to make a solo record from NSYNC, he chose to make… NSYNC, sorry, not NSYNC, sorry, I'm never gonna live that one down, I know that. One. Direction."

Moments after Harry Styles inducted her into the Rock & Roll Hall of Fame, Stevie Nicks mistakenly described him as a former member of NSYNC 😂 #HarryStyles #RockHall19 pic.twitter.com/mMkjLuAqiV

The two first met each other April 2015, when Harry fanboyed hard backstage at a Fleetwood Mac concert. It also happened to be Stevie's birthday, and so the former One Directioner brought some cake. "Piped her name onto it. She loved it," he told Rolling Stone in an interview. "Glad she liked carrot cake."

And in May 2017, Harry's "queen of everything" also joined him on stage at a secret performance at The Troubadour in Los Angeles while touring for his debut solo album. The pair serenaded the L.A. crowd with Styles' own hit "Two Ghosts," Fleetwood Mac's "Landslide," and Nicks's "Leather and Lace."