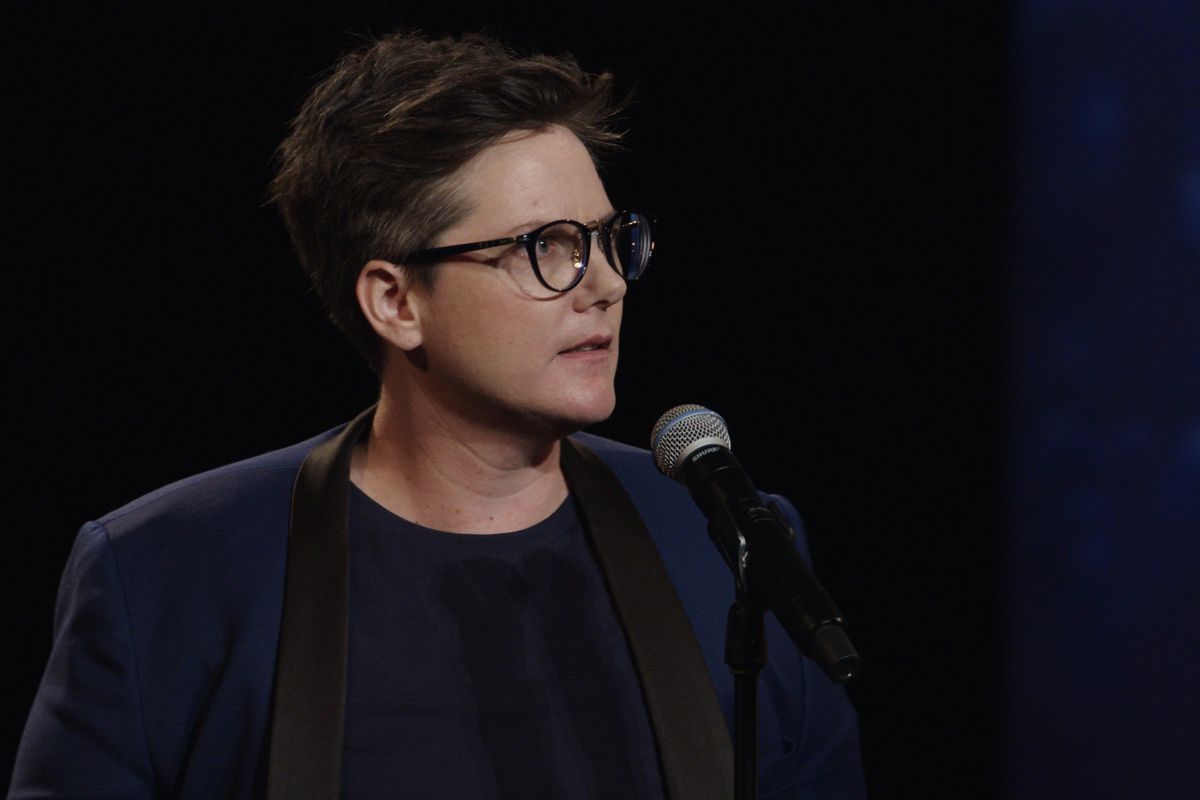 Accomplished Australian comic Hannah Gadsby was, until recently, largely unknown to American audiences (except for the few who watched the brilliant Melbourne-set series Please Like Me). But in the past few weeks, that's all changed. Gadsby's Netflix special, Nanette, has become a viral sensation, garnering passionate praise from outlets like NPR, The Atlantic, The New Yorker, and uh, everywhere cultural events are covered. But perhaps you're not a standup comedy fan. Maybe you've been turned off by the cacophony of schlubby white guys who love to do special voices for their dicks. Should you watch this? Yes. Very much yes

Gadsby's set details her early life growing up as a lesbian in a conservative community in Tasmania, an island that she jokes is famous for growing potatoes and a "frighteningly small gene pool," and where homosexuality was illegal until 1997. She is sharp and extremely self-aware, a quiet sort who says her favorite sound is the tinny noise of a teacup hitting a saucer. Her delivery is purposefully awkward, and punchlines are delivered with a sigh. But then about 25 minutes in, there's a revolutionary shift. Gadsby makes a serious declaration: that it's time for her to quit comedy. She is tired of being self-deprecating about her identity, her person, in order to relieve the tension necessary for a good joke. "Do you understand what self-deprecation means when it comes from someone who already exists in the margins?" she says. "It's not humility. It's humiliation. I put myself down in order to speak, in order to seek permission to speak, and I simply will not do that anymore."

From that point on, Nanette is a revelation. Perhaps you've heard that this is the #MeToo special, and Gadsby is indeed full of righteous anger. She has suffered, and she wants you to know her story. She needs you to pay attention to all the women with potential who were ignored in favor of a "man's reputation." She calls misogyny a mental illness, tears apart the injuries that homophobia (or "soaking a child in shame") inflicts on a person. Much of the special features interrogations of the form of writing jokes about such things; how to structure them effectively, and how that structure wrongfully contributed the way Gadsby sees herself. She is an artist dissecting her own art form, using the classic comedy callback to gut punch viewers in ways you can't see coming.

Gadsby studied art history (a degree she frequently says is "useless"), and much of the special is dedicated to greats of the Western canon, using Van Gogh as an entry point for scrutinizing society's view of mental illness, Picasso for misogyny (one bit focuses on Picasso's invention of the multiple perspectives of cubism. As Gadsby quips, "Any of those perspectives a woman's?"). The material is funny and enraging and frankly quite educational; I will personally never view "Sunflowers" in the same way. And what standup specials feature riffs on gender and color theory? Consider her take on the color blue.

Nanette subverts expectations in so many ways, and I don't want to spoil any more of it. In the end, Gadsby's writing is so very careful; nearly every moment of the special features a vivisection of a previously explained concept. Her rage is essential, and yet she says it can be toxic. Her goal is to seek out humanity in others, to let her own deep sensitivity flourish instead of callusing over. It is beautiful. Just watch it. Watch it now!