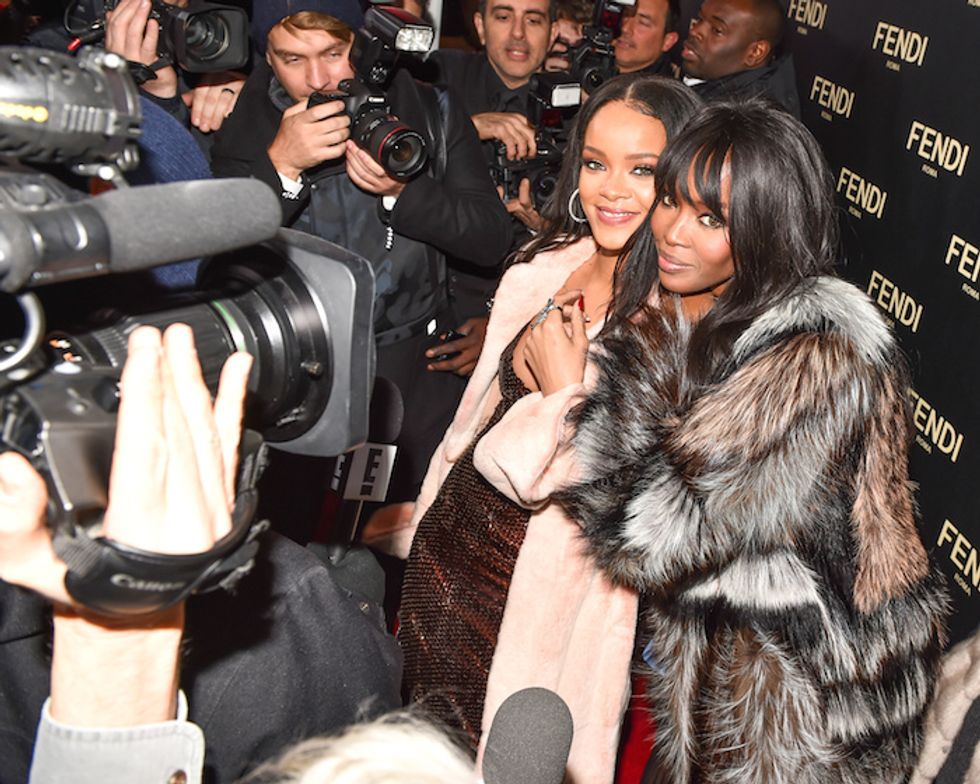 by Mickey Boardman
PAPERMAG
Rihanna and Naomi Campbell
The corner of 57th and Madison is one of the chicest shopping addresses in the universe and that's where the new Fendi boutique opened last night. Style addicts young and old convened on the fashionable corner to celebrate the legendary Rome-based fashion house and its creative directors Karl Lagerfeld (women's) and Silvia Venturini Fendi (women's and accessories).

The evening's DJ was none other than former Paper cover girl and lover of large hats Erykah Badu. The songbird turned turntablist played an eclectic mix of songs from Vanity 6 to Jay Z. We asked her if she prepared a special mix for the fashion crowd. "It's kind of like therapy for me," she explained "so whatever happens, happens." Are there any songs she always ends up playing no matter what the gig? "Doobie Brothers, " she smiled. "What a Fool Believes."

In between shaking their money makers to the song stylings of Miss Badu and enjoying aperol cocktails guests perused the Peter Marino-designed boutique and shopped. Martha Stewart, sporting her first-ever piece of Fendi, which she'd gotten 16 years ago, snapped photos of shoes and bags she liked. "You can wear it as a dress or a coat, " she told me about her outfit. Did she spot anything at the boutique she had to have? "I want one of these creatures!" she said fondling the Maddie, a little powder blue fur monster accessory. Blue is certainly a color she can't resist --spotting Paper's own blue-haired Drew Elliott, Stewart hustled over to him to get a photo together.

The monsters Martha was eyeing are the latest sensation from the company that brought you the baguette, one of the all time champion It-bags of our time. "These monsters are like adult teddy bears," one party guest was overheard saying. "Beanie Babies!" declared his jovial friend.

The store is two floors of pure luxury designed by Marino, the King of luxury boutiques. We told him that we flipped for One Way: Peter Marino, the art show he curated about himself at the Bass Museum of Art in Miami. "Doing a show on yourself is stressful," he laughed. A favorite piece of ours was a sculpture of Marino so lifelike that visitors to the museum thought it was him. And so did some press outlets. "A photo ran in a magazine (of the sculpture) that said 'Peter Marino and his installation. They don't know I consider myself my own work of art!"

Throughout the night a parade of well-dressed fashion bessies pranced up and down the stairs of the two-floor store. Model Coco Rocha, who is pregnant and recently celebrated the release of her book, Study of a Pose: 1,000 Poses by Coco Rocha, joked that "making the book was harder than making a baby." Olivia Palermo looked gorgeous in a dress and coat set by Diane von Furstenberg and carrying a Fendi bag. Sarah Jessica Parker, Rosario Dawson, Zoe Kravitz and Sofia Coppola were there, all decked out in Fendi. Stylist June Ambrose wore a big round fur hat she said was inspired by the Flintstones character the Great Gazoo. Model mom and daughter Pat and Anna Cleveland joined supermodel Naomi Campbell in dancing to Jay Z's "I Just Wanna Love You" as Rihanna arrived.

We asked Rihanna if she remembered the first fashion show she ever went to. "I'm not sure which show was the first I went to but I certainly remember the first time I was in a fashion show. It was DSquared. I was in a super flowy dress and had two super hot guys alongside me." She smiled. The fun truly never ends in fashionland!

June Ambrose and Hannah Bronfman
All photographs by Billy Farrell/BFAnyc.com
You May Also Like
Art