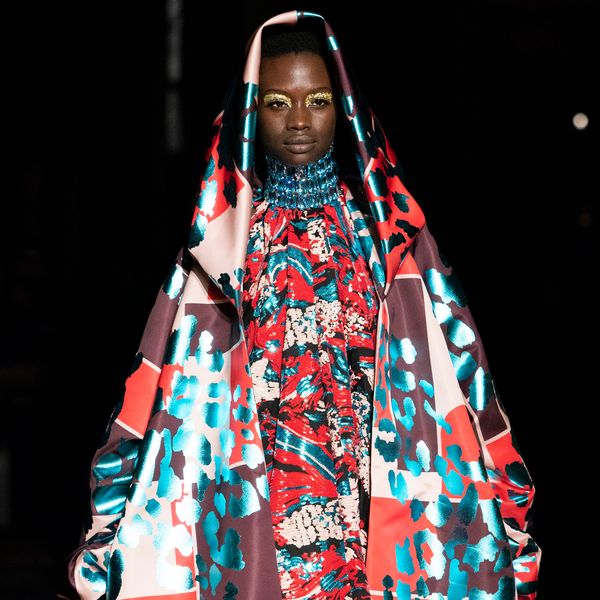 Designer Michael Halpern only graduated from Central Saint Martins in 2016, but the label has already become a household name of sorts and an instant go-to for sequined pieces reminiscent of disco days. For his fall 2019 collection, he sent a series of transformational dresses — including those that looked like metallic sunrises, golden gardens and glittering chests of ancient treasure — down the runway. Here's everything you need to know about the show.

Some of the most dramatic pieces of the collection were the thick crystal chokers that covered the models' entire necks. Some were used as an added extension to dresses while others were worn as solo accessories that amped up an already super glam collection.

Halpern took inspiration from the iconic French-Russian illustrator Erté, known for his whimsical and surreal drawings of costumed women. Some of the looks at Halpern, dotted with metallic turquoise leopard spots, looked like they were straight out of one of Erté's drawings.

Two of the most dynamic pieces in the collection were a sunset meets sunrise hued dress and top. Made of a slinky fabric, each outfit looked almost liquified.

A highlight of the fall 2019 show? The mixed prints in striking red, blue, black, cream and golden tones. It was busy in the best possible way.