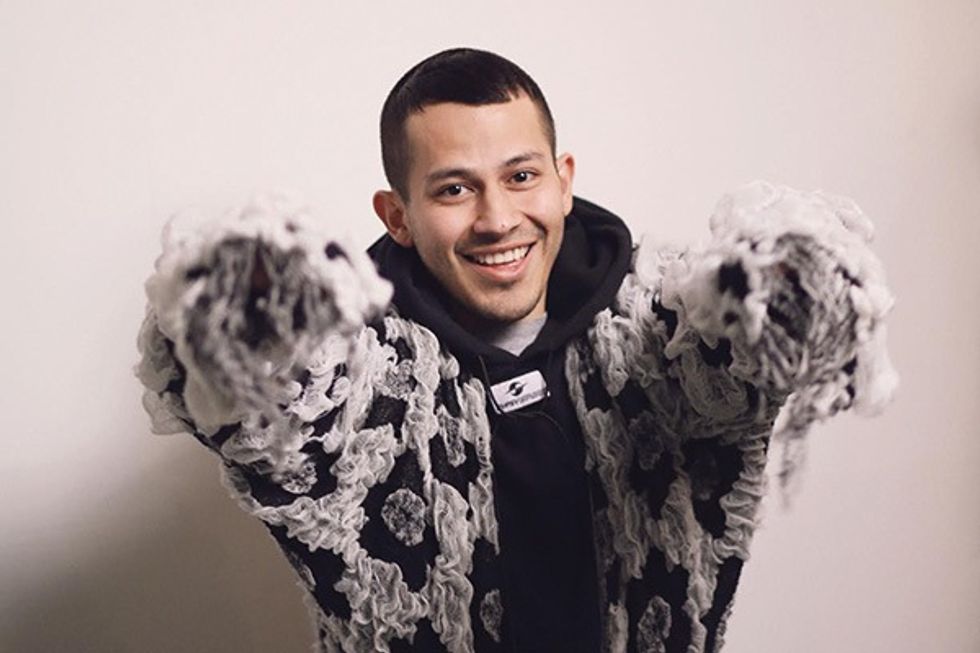 by Kurt McVey
PAPERMAG
Photo by Jonathan Grassi
There's something special about Rio Uribe, a member of Paper's Beautiful People Class of 2015 and the young designer behind Gypsy Sport, one of the buzziest fashion lines currently based out of New York City. So special in fact, that after a studio visit, Anna Wintour made it a point to personally reach out to IMG to help fund and secure a MADE Fashion Week S/S 2016 runway show for the Los Angeles-raised wunderkind. The show, which begins at 2pm today at Milk Studios, is for more than just bragging rights, it will be a major factor as to whether Gypsy Sport, and not the nine other emerging fashion lines in the running, will bring home the CFDA/Vogue Fashion Fund Award on November 2nd. Whether it's editors like Wintour or kids on Tumblr, Gypsy Sport has been getting fans left and right, who appreciate the much-needed color and playfulness that Uribe's designs are adding to the streetwear scene, one long-dominated by the moody, black-and-white palettes from brands like HBA.

While the artistry, skill and vision put into his clothes speak for themselves (Uribe previously spent six years at Balenciaga), it doesn't hurt that his previous shows and presentations have gotten gangbusters attention like his debut Washington Square Park Spring 2015 guerrilla runway or February's DIY "Cirque D'Sport" show at Clemente Soto Velez on the Lower East Side. We had the chance to visit Uribe's Garment District warehouse basement studio and talk to the designer ahead of his show. Read his thoughts on everything from the art of being a bro and his fantasy universe, "Planet Haturn," to dragonflies and the advice he got from Anna Wintour.

You've been working so intensely over the last year especially. Do you feel like you're in your own fashion bubble sometimes?

Yes, though I don't think it's a social bubble. I think it's more of an energetic thing. We call it "Planet Haturn," a space that's more mental than anything.

What would an alien being or any space traveler see after breaking through the atmosphere of Planet Haturn?

You'd first come through very iridescent clouds and gases. Once you get through that layer, it would look a lot like Earth, but there are rings around it -- you know, our symbol -- the two hats rotating. The continents are more like squares, hexagons and circles, very geometric. The cities would be palatial with futuristic architecture but with ancient references, like the pyramids.

The people are us -- those who buy into the Gypsy Sport brand. We're accepting of everyone. It's not a classism type thing. I don't like the term high-end because that implies there's a low-end. I don't think that describes my Gypsy family and me.

An image from Gypsy Sport's Fall Winter campaign.
Do you think "high-end" and "high-fashion" are synonymous?

I like high fashion, I just don't like high-end, mostly because of the money issue. I want people to buy our special pieces for a few hundred dollars, but I also want people to be able to buy a cap or a T-shirt for their friends. This may force us to go more in a lifestyle direction, where we'll create things for your home or for sports or other activities, but that's cool. We like having to think outside the box.

Has the meaning behind the name of your brand shifted or evolved since you launched in 2012?

Gypsy Sport, before anything else, was about third-world sensibilities or about an artifact you'd find on another planet. It's not so much about "gypsy" or "sport" individually, but how the words, when combined, become something unique. You could put any noun, adjective or pronoun before sport and it could become something interesting. I think I've seen Poncho Sport, which I remember from my time in Mexico and I wanted my line to have that vibe.

What does sport mean for you?

Fun. Active. Ready to wear in the full sense of the word. Not necessarily evening or "occasion wear," which is a big thing. It's sportswear and streetwear at its root. Gypsy is about subcultures and how to target those I related to or belonged to without neglecting others. Gypsies, as people, go beyond race, gender, religion or nationality.

It's become more of an idea or a lifestyle.

It has that bohemian implication.

Have you ever received criticism over the political correctness of that word?

Yeah, but I basically tell them what I just told you.

Body image is a big issue in fashion right now. How do you approach body image with a word like sport in your title?

When I was young, I told myself that if I ever started a line, it would be plus-sized because I saw that my mom could never find anything to wear. I realize now that if I'm casting, the models just have to feel real. Sometime I think the clothing can be a little too dreamy, or tough to sell, but if it's on someone you would maybe see on the subway, it makes it relatable. That's what some of these "Nodels" are to me.

Would you say you're helping to take a little of the "bro" machismo out of sport?

We did a campaign last season called "Bromance" about two tight friends who are ride or die -- that was the alternate title -- who take an endless subway ride and get lost together. It wasn't completely a gay thing. It was a lot of things -- more romantic. Bro-ness should evolve, but it shouldn't lose its masculinity. No, you don't have to be a macho standard to be a bro. You can be an edgy, hot lesbian maybe. I don't know.

Gypsy Sport has blurred gender lines from the beginning but can you talk about the idea of doing a "women's line" and how that would stand in contrast, not only to your summer men's show for instance, which used all male models, but the brand's mission?

The whole genderless or non-gender specific design was almost an afterthought. I like the idea of designing for women as much as men. My process is built from divine inspiration in a way and then created with what resources I have, which is what gypsies do. I consult my team on most of the steps, and then when the piece is completed, my stylist Lester Garcia and I decide if it should go on a man or a woman. Sometimes we feel more butch or more femme, but it's never just for boys or girls.

Your benefactor is a Chinese immigrant who is helping to provide you with this cool working space and he had a similar benefactor decades ago, an old Jewish tailor who provided him with work and lodging. How mindful are you of this cool narrative and can you already see yourself doing the same a generation from now?

Aside from being alternative and global, I like that Gypsy Sport is American -- all these different nationalities helping each other out. I would love to see Gypsy schools or education centers where young people can learn a craft, something between the Ali Forney Center and Booker T Washington.

Let's talk about the CFDA/Vogue Fashion Fund Award. You have so much momentum behind you. Tell me about the people you've been working with on the road to the announcement of the winner.

I had a very cool meeting with Ken Downing, who's the fashion director and senior VP of Neiman Marcus and also Steven Kolb, CEO of the CFDA. They were so cool and honest to the point where I felt comfortable asking any question. They even tried stuff on.

Pretty good. They made it work. [laughs] One of them had some interesting things to say about commerciality, the other about creativity, but I think they appreciated the balance we're trying to strike. Jenna Lyons came in, too, and hung out when we shot this campaign. She met the models. She was very cool.

An image from Gypsy Sport's Fall Winter campaign.
Take me through the first time Anna Wintour came to the studio.

She came in with an assistant and Mark Holgate, who I really respect. He's also a judge on the panel. She looked great and wore her sunglasses and was super nice, sweet and genuine. I didn't feel intimidated at all, surprisingly. I was really able to pick her brain a bit and I think she had fun too.

What's the juiciest nugget you pulled from her?

And she helped secure this show at Milk right?

In a major way. I asked her opinion about whether or not I should have a show. She said I absolutely should. I told her I was thinking about doing it here in the studio, atelier-style. She stopped looking through the clothes, pulled down her glasses a little and said, 'absolutely not.' [laughs] She sees something bigger for us, which is more validating than anything.

Can we talk about a few of the "nodels" you've used in the past, perhaps one or two that have become instrumental to the GS family?

Absolutely. Fishbonez is one of the most influential break-dancers and circus performers out there and he really carries the GS brand with him. Also, I have to throw out Seashell's name. She's a really young, cool muse. I fell in love with her immediately.

Everyone always says it's practically impossible these days to be a young working artist in NYC -- studio space is too pricey, the rent is crazy -- but here you are doing it.

New York is tough for everybody. I think you just have to hit the ground running and don't sleep. There are always opportunities knocking at your door. You just have to recognize them.

This city seems to be treating you pretty well.

We have a love-hate relationship just like everyone else, but that's what "Haturn's" about. It's a rotation. It's balance. You take the good with the bad, but if you make the good really good, you can swerve the bad.
You May Also Like
Famous People