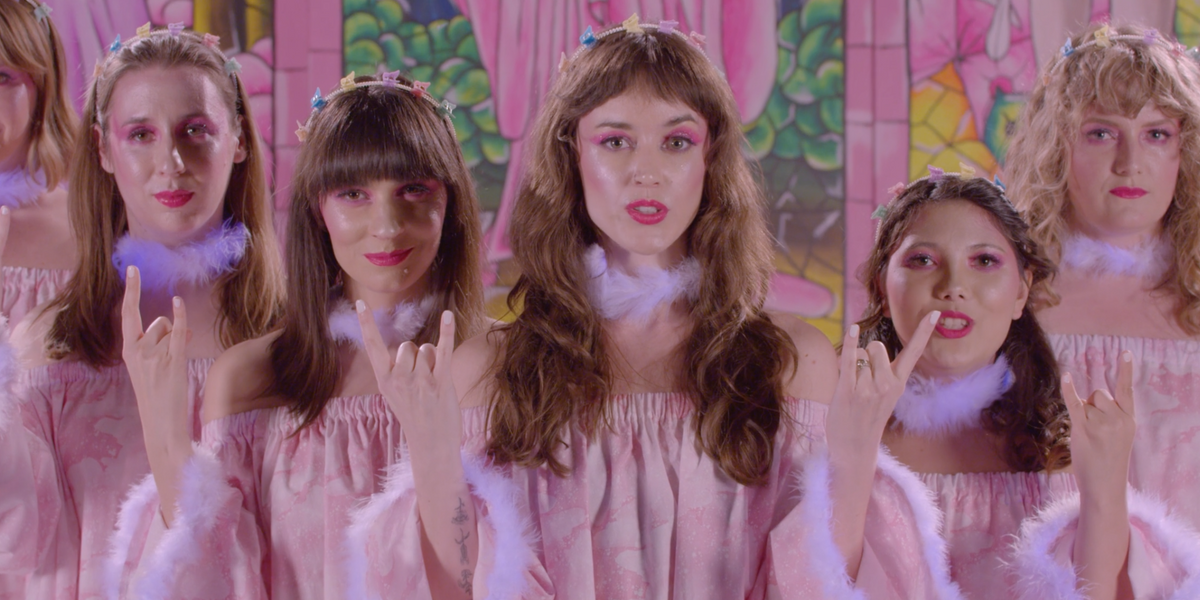 Artist Gwenmarie White infuses glossy rose-tinted scenes of teen girlhood with a rough metal edge. She describes herself as a Metalhead Valley Girl who is "interested in what would happen if Laura Ashley listened to Cannibal Corpse, if the subway scene from Possession took place in Limited Too if Lisa Frank ran a dogfighting ring and if Bonne Bell made corpse paint." Her work is lush and pretty on first viewing but sinister upon further consideration. Her videos use bright pop songs, pink backdrops, and cheerleader outfits to sugar-coat a sharp underlying critique of the ways in which patriarchy is violent towards women and causes them to be violent towards one another.

In her new film, Skjemt Blod, she pushes the darkness in her work further than ever before. The video, which means "Bad Blood" in Norwegian, shows a group of cheerleaders laughing and hanging out as a a choral-metal remix of Taylor Swift's "Bad Blood" is performed in the background. Though the video begins with typical images of feminine care, it quickly turns violent, as hair braiding turns into backstabbing, smiles into snarls, and an angel is ultimately stripped of her wings by the other girls in the video.

Though Skjemt Blod uses Taylor Swift's pop-feminist girl power anthem as a backdrop, it is not a straightforward critique of Swift or of pop culture. White says that her work straddles the line between critique and complicity. The structures at play that lead to internalized misogyny are bigger than any one pop star or song. White instead explores broader questions — what does feminine power look like? How can women claim it without presenting themselves as masculine and without hurting one another? How is gender also a racial construct?

We talked to her about her interest in Taylor Swift, how her work critiques whiteness, and what her visual influences are. Check out our conversation, and the video, below:

Why do the women in the video wear cheerleader outfits?

In a description of the work, you mention that "suburban whiteness rears its ugly head" in this video. How is the video a critique of whiteness?

I think it's important to acknowledge the complexity of race within tropes such as "the cheerleader" or "the mean girl." On one hand, I'm drawn to the glamour, irreverence, and vicious audacity of these romanticized, late 20th century teen movie stock characters—but they have a loaded history, and often serve as vessels for the violence of colonialism and capitalism. Wolves in sheep's clothing. I wanted to mess with temporality in the form of slow-mo to turn the conventionally beautiful into the monstrous and grotesque.

"Bad Blood" is a song that is supposedly about female solidarity. Were you purposely using that song to critique the way that message might have come short in Swift's work/ in pop feminism in general?

No. The song choice was a response to my turbulent and toxic art school experience. I think I identify with Swift as a vilified figure (within my own grad school microcosm), and "Bad Blood" resonates with me as a tale of coming to terms with internalized misogyny and horizontal hostility (in-fighting), which art school is fraught with. It was cathartic to appropriate the song and circulate it within the same space where my experiences were invalidated exclusively by other women.

Are you a fan of Taylor Swift's music?

Hell yeah! I was initially super impressed by her choice to work with the genius Max Martin, and ended up falling in love with her artistry and the ways in which she owns her subjectivity, sonically and otherwise.

The hair braiding scenes remind me of Dua Lipa's "New Rules" video. What were your visual influences?

For the sleepover scenes, I knew I wanted to include childhood games that veered off into slightly violent territory. So I deconstructed things like "the chills," and "down by the banks," sitting in "massage trains" (behind each other in a line or circle), and playing with hair and allowed them to move to darker places. There are different gestures and chants depending on the region, but I'm so taken with the underlying aggression of lyrics like "stab a knife in your back/feel the blood rushing down"…I wanted to bring them to the forefront.

For the world of the band I thought, what if 1998 Bonne Bell-esque corpse paint meets Gorgoroth's infamous Black Mass performance in Krakow? I wanted women to invade traditionally male territory (metal), without having to perform masculinity to be taken seriously.

I aimed to do a similar thing with the choir soloist (Bridget Galanis) standing behind the pulpit and dominating that patriarchal space while still looking like she could step out of Clueless. I take hella umbrage with the scapegoating of femininity.

I would describe the rest of my aesthetic as "upsetting things happening in Limited Too" haha.

The hair braiding transforms into back stabbing. What is that meant to signify?

It's mutual grooming gone awry. I think it comes back to the themes of female in-fighting.

What does the term "girl kvlture" mean to you?

Why did you choose to contrast specifically feminine pop culture imagery with metal? Do you feel American pop culture is violent towards women? If so, how?

I wanted to play with the idea of female brutality within a metal context. I thought it would be even more sacrilegious and Metal Edgelord-infuriating if not only was it feminine, but it was pop. Men with face paint swinging maces in the forest is one way to perform brutality, but I was interested in exploring the ways in which women use it to survive/thrive in capitalism.