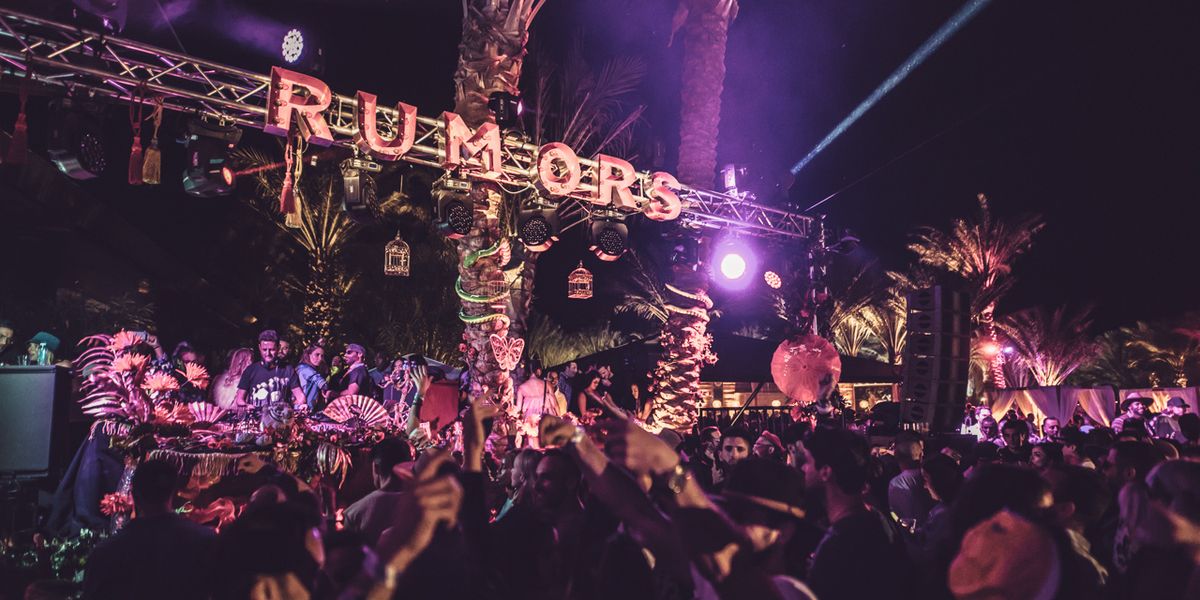 Inside Coachella's 'Most Exclusive' Party

Before Ariana Grande even belted her last note Sunday night of Coachella Weekend One, there was already a winding line of people trying to sneak past the bouncer outside what had been billed as "the most exclusive" festival after party. The brainchild of jet-setting DJ extraordinaire Guy Gerber, his re-occurring international RUMORS night touched down at the multi-million dollar Zenyara estate for a night of lo-fi house and hypnotic techno on the shore of a football field-sized pool.

With Pusha T, Leonardo DiCaprio, A$AP Ferg, Virgil Abloh, Stella Maxwell, Wiz Khalifa, Gigi Hadid, Diplo, Candace Parker, and Cuba Gooding Jr. all reportedly in attendance, it isn't hard to understand why RUMORS was one of the hottest post-Coachella tickets. Presented by LA promoter, Framework, and produced by Corso Agency and Goldenvoice, the night featured music by DJ Seinfeld, Blond:ish, and Gerber himself with a second — chiller— stage at the opposite end of the man-made desert oasis for those looking to get off their festival-worn feet.

The venue felt like something plucked straight out of a Bond film, with bikini-clad models casually clustered around bottles of champagne, taking dips in pools nested inside of larger pools. (A feeling that wasn't helped by the fact that you could spot Idris Elba in the background, undercover as a DJ on some sort of spy mission). Clearly self-aware, the after party leaned into its luxe reputation with a Rolls Royce set out on the front lawn to welcome guests, top shelf spirits at an open bar, and helicopter pad visible in the distance amounting to an absurd display of wealth that would leave even the most down-to-earth person untethered from reality.

Take a look behind the velvet rope and relive all the excess that went down at RUMORS in the gallery, below: