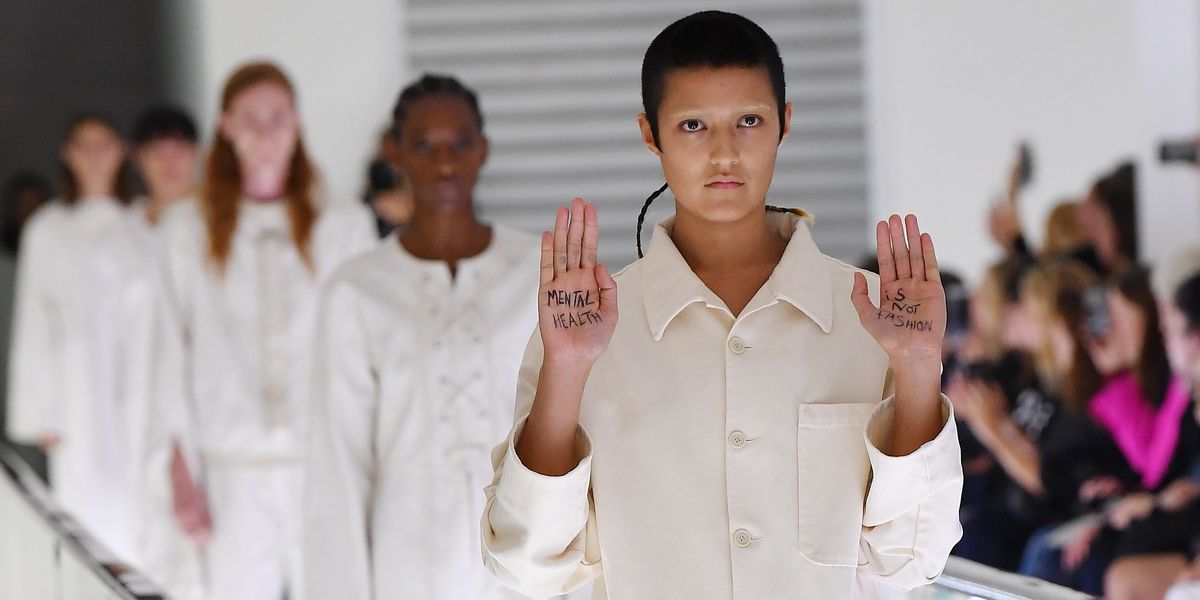 Alessandro Michele's presentation of Gucci's Spring 2020 collection stood out at Milan Fashion Week. There was the futuristic conveyor belt runway flanked by sterile white walls, metal shutters, and plastic chairs, quotes from Michel Foucault filled the show notes, and A$AP Rocky, seated front row, appearing to really vibe with the entire vision. Michele broke the show up into two parts, leading with a series of straitjacket-inspired looks meant to serve as a dystopian contrast to the collection's colorful second half.

But Michele's use of the straitjacket as shorthand for society's stifling of creativity and individual expression did not sit well with everyone. It was during this portion of the show that model Ayesha Tan-Jones (aka YaYa Bones) staged a peaceful protest raising their palms as they were carried down the runways revealing the message "MENTAL HEALTH IS NOT FASHION" scrawled in pen.

"I chose to protest the Gucci SS20 runway show as I believe, as many of my fellow models do, that the stigma around mental health must end," Tan-Jones in a statement posted to Instagram afterwards. "As an artist and model who has experienced my own struggles with mental health, as well as (having) family members and loved ones who have been affected by depression, anxiety, bipolar, and schizophrenia, it is hurtful and insensitive for a major fashion house such as Gucci to use this imagery as a concept for a fleeting fashion moment."

Tan-Jones further went on to underscore their point by explaining that the straitjacket is "a symbol of a cruel time in medicine when mental illness was not understood, and people's rights and liberties were taken away from them, while they were abused and tortured in the institution." They also added that they were not the only model that felt this way, and as a result would be donating a portion of their payment from modeling in Gucci's show to charities dedicated to mental health.

Related | Watch A$AP Rocky Getting His Life at Gucci

Gucci responded to the protest with a statement that looked to clarify the collection's heady concept, explaining that Michele "designed these blank-styled clothes to represent how through fashion, power is exercised over life, to eliminate self-expression. This power prescribes social norms, classifying and curbing identity."