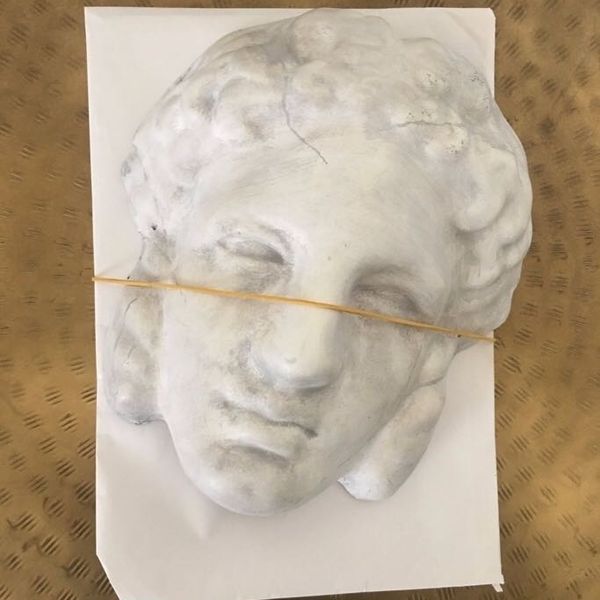 Fashion weeks in Europe tend to be more genteel than that in NYC. Fancier venues! And a much higher percentage of designers send out actual, physical invites. Alessandro Michele at Gucci has made a habit of releasing particularly nice ones — like insect-themed glass slides and beautiful 3-D pop-up cards. But this season, the house outdid itself, sending out enormous plaster casts of an ancient Greek mask. New York Times fashion critic Vanessa Friedman was not a fan.

Seriously, this is the @gucci show invite. I have to walk around all day carrying a plaster mask, because it does n… https://t.co/ApsBBGXybW
— Vanessa Friedman (@Vanessa Friedman)1550654735.0

The mask, which looks like something Michael Stuhlbarg would have dredged from an Italian lake in Call Me By Your Name, is a cast of the head of a Hellenistic statue of Hermaphroditus, the mythological child of gods Hermes and Aphrodite and longtime symbol of androgyny. Ovid tells the story of Hermaphroditis in Book 4 of Metamorphoses – Hermaphroditis, born a boy, was spotted in the woods by the nymph Salmacis, who instantly fell in love with him. She prayed to the gods that they would never part, and their bodies fused together.

"Obviously, that underscores Michele's love of androgyny and the ancient world," Alexander Fury wrote for AnOther magazine. "But the meaning of the mask is more than the purely aesthetic. Gucci released a brief treatise exploring the idea – contradicting the idea of a mask as synonymous with dissembling and deceiving, it counters that a mask can be authentic, 'if by authenticity we mean the possibility to stick to the idea we have of ourselves, the mask becomes the means through which we can become what we feel we are.'"

Fury pointed out that masks were a symbol of freedom in the 18th century. People could wear them to balls, conceal their identities, and behave however they wished. "If we're getting philosophical – and, after that preamble, we inevitably are – then clothes are another mask," he wrote. "They mask the body, at their most basic. But they also ally to those above ideas, and to the idea that a mask represents different impulses and urges: "exhibition and concealment, manifestation and protection, vanity and modesty."

It is a nice idea, and Michele did end up showing a number of masks at Gucci fall 2019. I couldn't put my finger on what they reminded me of (Jason?) and so I am very thankful to editor Nico Amaro, who tweeted a glorious grid pointing out that the Gucci masks look exactly like the ones the JabaWockeeZ wear!

Remember JabaWockeeZ? They won America's Best Dance Crew in 2008 and largely communicate by mime. I did not attend the Gucci show personally, but there is no evidence that models performed any JabaWockeeZ moves, nor did they wear the dancers' signature white gloves. The JabaWockeeZ themselves are busy performing at their Vegas residency, called JREAMZ: Journey Within. That title is kind of what Michele is going for with every Gucci season, right? He does love the surreal. Gucci fall 2019: greamz, a journey within.