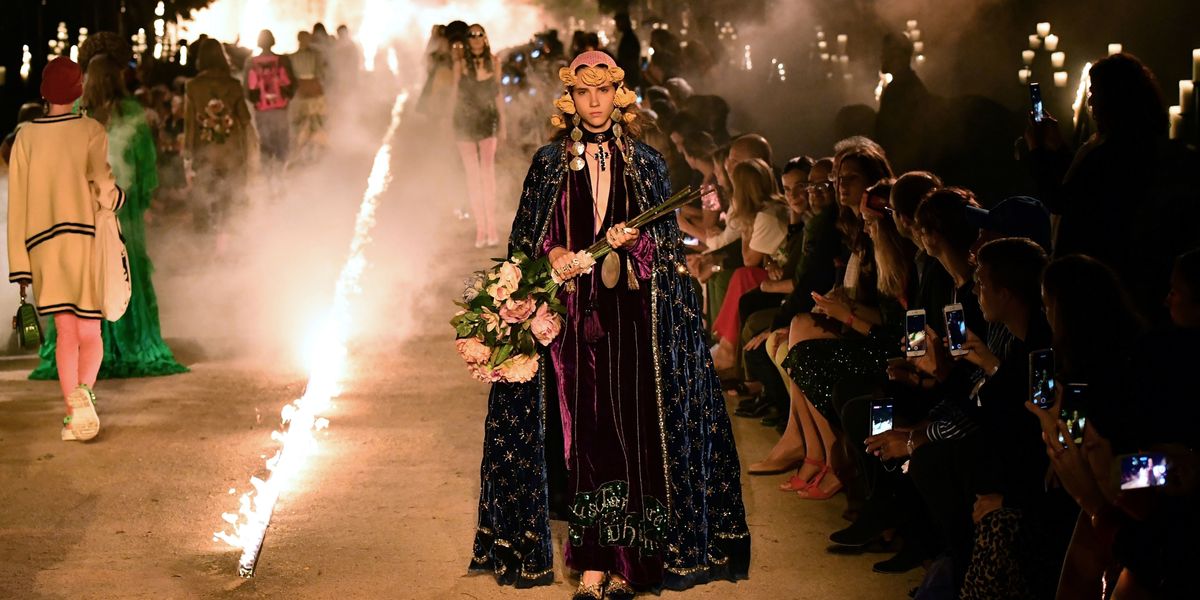 Gucci Threw a Fashion Party in a Graveyard

Alessandro Michele loves making the morbid or grotesque fashion, and the superstar designer's latest show for Gucci's Cruise 2019 collection was no different.

Considering Gucci's last big moment featured models walking around an operating room accessorized with severed heads and baby dragons, it should come as no surprise that Michele chose to live out his gothic-romance dreams in a Provence graveyard to showcase the luxury fashion house's resort offering. Life is a catwalk, and apparently, so is death.

Related | Gucci Sent a Sleeping Baby Dragon Down the Runway

Centered around "rituals of death," Michele's pieces ranged from that fit for a grieving widow to ghoulish, all peppered with christian symbolism. Velvet, baroque-inspired prints and Victorian silhouettes reigned as models walked the flaming catwalk (literally, a fire pit) in funeral procession-style to a chorus of church bells, choral music and owl hoots, holding bouquets of peonies. Original after-party performer, the forever-melancholy Lana Del Rey couldn't make the show, and was replaced by attendee Elton John.

Gucci on Instagram: ““Alyscamps is a Roman cemetery, but it’s also not a cemetery, it was a promenade, it became a walk in the 1700s; it is hybridized, it does…”

Despite the French location, the cemetery still had distinct to ties to Italy; originally, it was a Roman burial ground from the 4th century before becoming a Christian graveyard. Nevertheless, Michele is deep in his three-part homage to France, which began with his references to the 1968 student protests in Paris in the brand's February campaign, and will continue with its next show deviating from its traditional Milan location to feature in the Paris Fashion Week program instead.