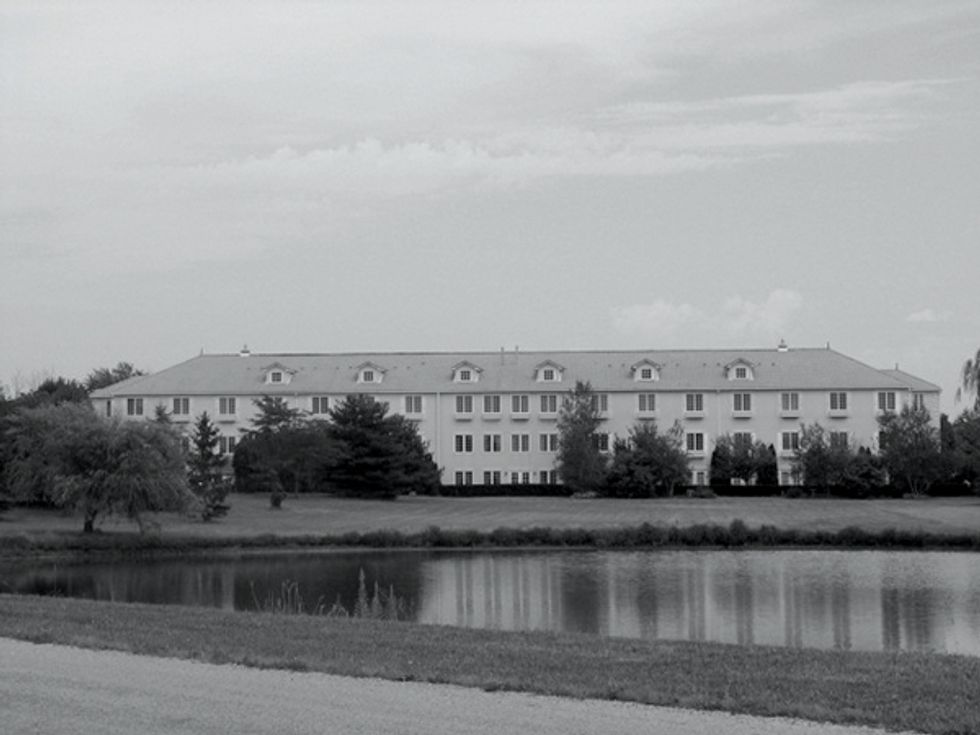 by Grace Bello
PAPERMAG
Magicians Doug Henning and Debby Douillard
Among the white barns, brick silos and verdant farmlands of Middle America is the city that Maharishi built. Maharishi Mahesh Yogi, founder of the Transcendental Meditation (T.M.) movement and former spiritual adviser to the Beatles, decided in 1974 to expand his quickly growing empire to, of all places, Fairfield, Iowa. That year, he founded Fairfield's Maharishi International University, a learning center for consciousness-based education, and began to attract wide- eyed idealists from all over the world to the American heartland.
During the 1970s and '80s, some of these newly arrived devotees -- called gurus, or 'roos for short -- came as families, seeking heightened consciousness for themselves and their kids. So how does the second generation of Fairfield meditators, a small crop of far-flung men and women born in the second half of the '70s, look back on the town and relate to its cosmic ideals?
"It sounds like I got high before this, but I didn't," says journalist Claire Hoffman as she tells me about what prompted her family to relocate from New York City to Fairfield. She traces their move to the Taste of Utopia gathering in December 1983, where thousands of followers were called upon to take part in what was called "the Maharishi Effect." She explains: "If the square root of one percent of the population got together in one place and meditated, they would create world peace." That meant convening 7,000 people in Fairfield, many of whom used Maharishi's Yogic Flying technique -- an advanced practice in which participants sat cross-legged while hopping forward. According to Maharishi and his followers, this critical mass of meditation would result in a decrease in poverty, crime and war. "All these people went there and meditated together for weeks in the middle of a crazy, subzero Iowan winter," says Hoffman. "That's what brought us there, and we stayed."
Hoffman grew up with fellow guru kids Benjamin Myers, aka Sergio of the dance-music duo Benoit & Sergio, and Eli Lieb, now an L.A.-based singer-songwriter. Myers says of moving to Fairfield in seventh grade, "I was really bummed out to leave California for the wasteland of Iowa. Superficially, it seemed to be a place full of vegetarians in flowing yoga attire with big dreams of world peace through meditation. But I always found the community strange and fascinating, even when I found it, at times, frustrating." Lieb's affection for the Fairfield way of life predated his family's move. He recalls attending Maharishi's events in his native Washington, DC: "He would be sitting there, and I would run down and give him a rose." Lieb's parents relocated the family to Fairfield to be a part of the colony. "It was a super supportive community," says Lieb, "and everybody was your friend."
Claire Hoffman (seated fourth from right)

Maharishi School of the Age of Enlightenment

In Fairfield, children went to public schools or to the private Maharishi School of the Age of Enlightenment (MSAE). That school's website boasts that, with an MSAE education,"students develop 200% of life -- 100% inner development with 100% outer success." Lieb says that most of the curriculum was typical, with a few exceptions: "We would read from the Bhagavad Gita in Sanskrit." Of course, meditation took place at the start and close of every school day. Hoffman notes that those meditations were graded. "You also took classes on Vedic science," says Myers, "where you'd learn Eastern philosophical precepts." Teachers allowed the young students to lie down and take a nap whenever they wished. Hoffman says, "Those early years were just an enchanted kingdom. We believed that we were changing the world, and it felt amazing."
But as the T.M. kids grew up, some of them began to discover that Fairfield was not all bliss and good vibes. In the 1980s and '90s, there was an ongoing conflict between townies and gurus -- that is, the born-and-bred Iowans and the New Age newcomers. In a city of almost 10,000 people, townies outnumbered gurus roughly four to one. Myers says,"Townie kids tended to be tough and big and somewhat intimidating, raised on beef and farm labor. Guru kids tended to be raised on rice and dal." Hoffman lived in both worlds; when her mother couldn't afford to send her to MSAE for high school, Hoffman was enrolled in the public school system."I would get thrown against the lockers, people would scream shit in my face, they would spit at me," she says. But Myers and Lieb say that, around the time they were in high school, tensions between townies and gurus had begun to ease."We were part of each other's lives from the beginning of them," says Myers. "The townies were our jock brothers, and the gurus their weird younger art-school sisters."
For all its talk of living less materialistically and more spiritually, the Fairfield T.M. community lifestyle was a financial strain on some of its members. From the entry fees for the Utopia conference to tuition for the private MSAE school to real estate -- in particular, custom-built Sthapatya Vedic houses -- the price of enlightenment was steep. "You don't have to live in a Sthapatya Vedic house if you live in Fairfield," says Lieb, who previously lived in one; "everything is your own choice." However, Hoffman, who was raised by a single mother, recalls, "I grew up in a trailer park in Fairfield. The price of everything -- school, going to the Golden Dome, all the Ayurveda treatments -- it was alienating for us as a family. It didn't feel very good not to be able to afford enlightenment."
Decades after growing up in Fairfield -- and three years after Oprah taped an episode there, bringing unprecedented attention -- these three descendants of the original Fairfield gurus still feel the effects of growing up in this unique, cloistered community. "I love going back to Fairfield," says Myers, whose mother and brother still live there."I see value in living a spiritual life. I think these things tend to make most people who practice them more thoughtful, more caring, more dedicated to a common good." Lieb, who left Fairfield at the age of 20 but then lived there again from 2010-2013, says that his return offered him an "anchor of happiness and self-awareness." He attributes his success in the music industry to the calm and confidence that he gained after he left NewYork City and rejoined the Fairfield T.M. community: "The second that that happened is when my career started to take off." To date, his music videos have racked up over 26 million views. And Hoffman, who remains ambivalent about her upbringing, briefly described her experience in her 2013 New York Times Magazine profile of T.M. champion David Lynch. She will further explore the fraught power of belief in an upcoming memoir.
All three guru kids continue to meditate.
Benjamin Myers