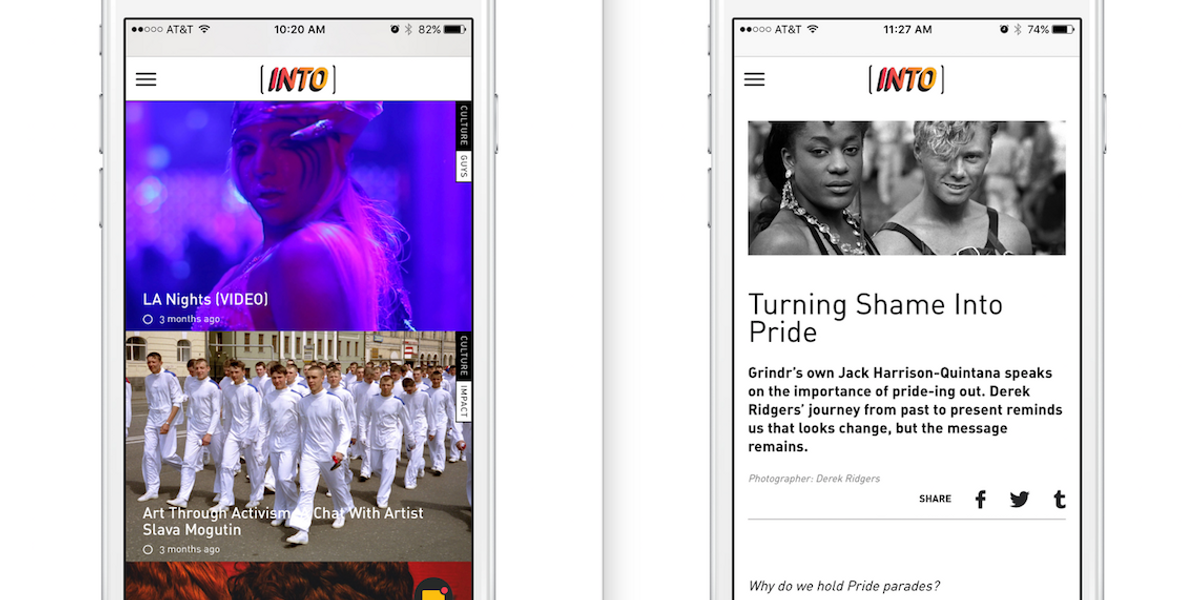 Grindr is many things to many different people in the LGBTQ world. For some, it's a way to make friends or professionally network. For others, it can be used as a tool to find potential long-term partners — you know, someone to bring home to the parents at Thanksgiving. And, still, for many others, the app is best utilized as a tracking device for finding someone else who's in the mood to...cuddle...right now.

But, even with all these features, Grindr has never been a destination for the accumulation of information. Despite its basic infrastructure making it the best option for delivering targeted content to an audience that's already, well, targeted, Grindr has, up until this point, existed only for the purpose of uniting men with other men in their general vicinity. But this is no longer the case, as the lifestyle brand is now launching Into — "an eclectic collection of articles, videos, photography, and more that celebrate and represent the modern LGBTQ world." In a press release, Grindr described Into as a "healthy mix of accessible, informative, and uplifting content."

Of the new venture, Joel Simkhai, the founder and CEO of Grindr, says, "After hearing from our very engaged 3 million daily active users that giving them content, through Into, that has a global perspective, but is also personalized and local will help them connect to a whole range of things they need in their day to day life." Some of these "things" include articles, photo galleries, and product lists for things Grindr users should try — all specifically directed toward the Grindr crowd (aka queer men).

In an effort to unite people "working at the intersection of LGBTQ culture and what in-the-know audiences are talking about," so far, the company has recruited a slew of popular industry names to contribute work, such as artists like the late Ren Hang, Michael Bailey Gates, and Slava Mogutin. Speaking on their decision to source contributions from a variety of modern tastemakers, Grindr's creative director, Landis Smithers, said, "When you have creators of all kinds, from artists to social activists to cultural influencers, we are able to curate everything from real time accounts of where to go in cities around the world, to information on the hottest trends from people creating them, to first person accounts of events impacting the LGBTQ world every day.