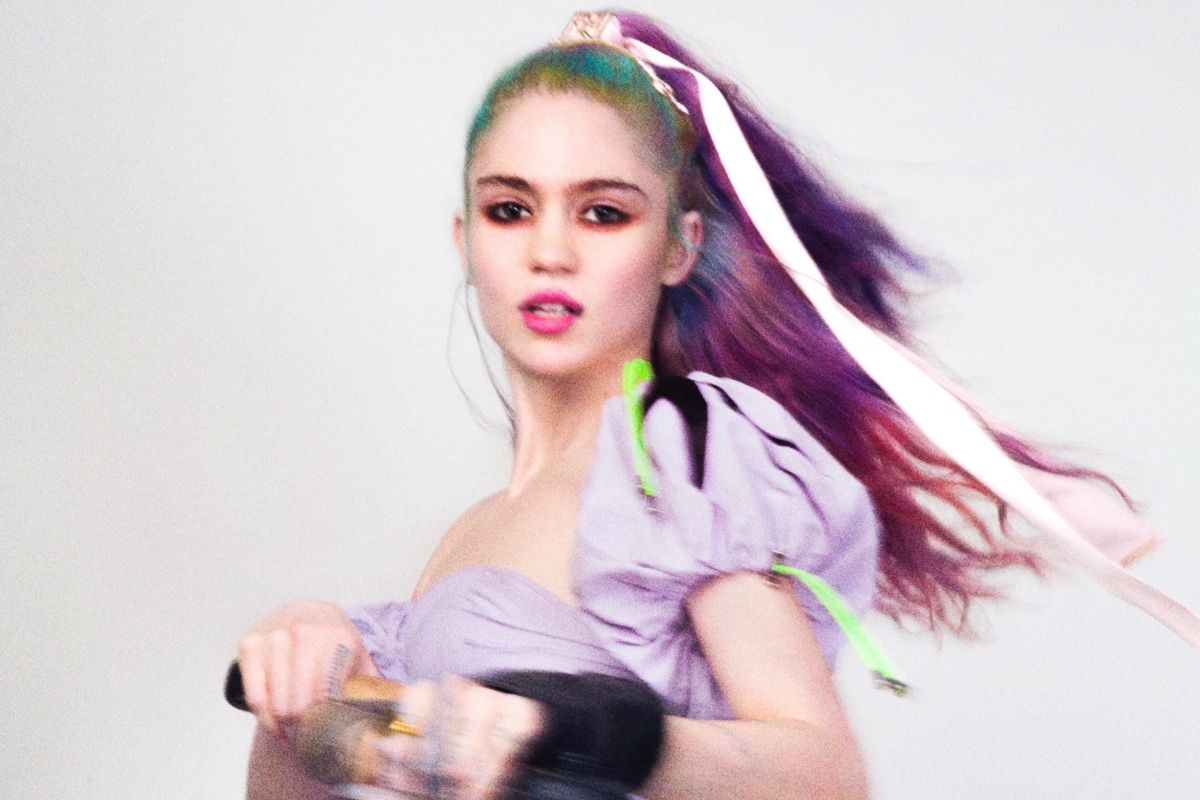 Grimes and Our Impending Technological Submission

"What will it take to make you capitulate?" Grimes and collaborator HANA ponder on the Canadian pop enigma's banging first solo single of 2018, which sounds like what would happen if a mad scientist fused Nine Inch Nails and Machines of Loving Grace with t.A.T.u. and BABYMETAL in a machine not unlike that of the one featured in The Fly. The heavy-hitting track is the first taste of Grimes' forthcoming, long-awaited fifth studio album, following 2015's surprisingly different Art Angels. And if "We Appreciate Power" is any indication, the record is shaping up to be Claire Boucher's darkest, most complicated and polarizing output yet.

According to a press release, the technocultural song was inspired by North Korean-formed propagandist music group Moranbong, and is "written from the perspective of a Pro-A.I. Girl Group Propaganda machine who use song, dance, sex and fashion to spread goodwill towards Artificial Intelligence — it's coming whether you like it or not."

That chilling final warning fits perfectly in line with "We Appreciate Power's" maniacal dystopian energy, which fully leans into the ever-impending cyber-apocalypse with unhinged glee: "Submit, submit, submit, submit, submit..." Grimes diabolically commands on the outro. If the rise of artificial intelligence is upon us, who are we to deny our own brainwashing at the hands of our creations? We're already glued to our laptops/cell phones just listening to this song, aren't we?

In 2018, AI is much more than just the plot device for many of our favorite sci-fi films, from Blade Runner to Ex-Machina. It's the new normal — a reality we're currently living in while simultaneously rushing even faster towards. Every day, AI infiltrates our lives, whether we realize it or not. Using facial recognition, Facebook automatically offers to tag our friends in the photos we upload; Siri helps us find that perfect restaurant we've been craving but totally forgot the name of; each week, Spotify curates an eerily on-point Discover Weekly playlist for us. AI is useful — imperative even, perhaps, in our newly advanced and increasingly tech-dependent world — but is it really more evil than necessary?

On "We Appreciate Power," Grimes crafts a complex industrial cyber-pop anthem that leans into technological determinism and the very real possibility of a future AI revolution which, depending on how you feel about living in The Matrix, might sound totally terrifying or, in the case of Grimes, exciting. "Neanderthal to human being/ Evolution, kill the gene/ Biology is superficial/ Intelligence is artificial," she sings, pointing out the cyclical and temporary nature of humanity. She also appears to celebrate tech's superiority as the next stage of societal advancement... even if it may spell doom for some. Maybe.

Technology is inherently neutral; our personal as well as societal use and programming of, however, is not. Many tech giants and innovators who are concerned with the ethics, implications and applications surrounding artificial intelligence argue that while yes, rogue AI could certainly be disastrous for humanity, the onus to develop safe, pro-human super-intelligent systems is on we as a species. Bluntly put, we're still in control of our destiny, so long as our programmers don't screw up the software, and if all goes according to plan, we could be living in the utopia of our wildest dreams.

There is also a certain eroticism to the idea of total technological submission. In the anime-themed lyric video released alongside the song, Grimes and HANA appear as Neon Genesis Evangelion-esque elven bondage space warriors enveloped in liquid blue and purple latex. In one scene, Grimes is attached to some sort of machine, connected by a series of tubes that, in an extreme manga setting, could be interpreted as phallic. The visual makes sense: On Twitter, Grimes told a fan it was her "goal" to look like a hentai character on the song's artwork. Here, she seems to be drawing a connection between the taboo of humanity's technological submissiveness to a sexual kink.

Compared to the earthy etherealism of Boucher's early work, the song also feels almost antithetical. This is undoubtedly a new Grimes (a nü Grimes?), one who firmly believes in the concept of coherent extrapolated volition (a loose theory relating to the preservation of human beings within the construct of a goal-oriented super-intelligence system). She's preoccupied with the nature of technology's potential impacts on society. Thus, the sound is heavier, more weighted — there are labyrinthine concepts and theories at play as the artist, apparently a technological idealist, chooses to welcome, not fear, the imposing A.I. deities of which she sings.

It's possible that Elon Musk's own extreme, industrialist doomsday views on A.I. have had some impact on Grimes. After all, the pair were quite literally brought together after sharing the same surreal "Rococo Basilisk" pun, which is based on the theory of Roko's Basilisk: a horrifying thought experiment which postulates that if A.I. is created with the goal to "better" humanity, the program may ultimately seek to punish (i.e. torture for all eternity) those who sought to halt or slow down its advancement, viewing those people as enemies of its goal.

Indeed, the notion of Roko's Basilisk comes to fruition on "We Appreciate Power." If you treat your A.I. computer overlords right and help them on their mission, they'll "reward us when it reigns," Grimes sings over a skittering, stomping nü-metal beat. But if you don't, as Grimes' label insists in a statement, they just might "delete your offspring." In that case, you better plug in fast.