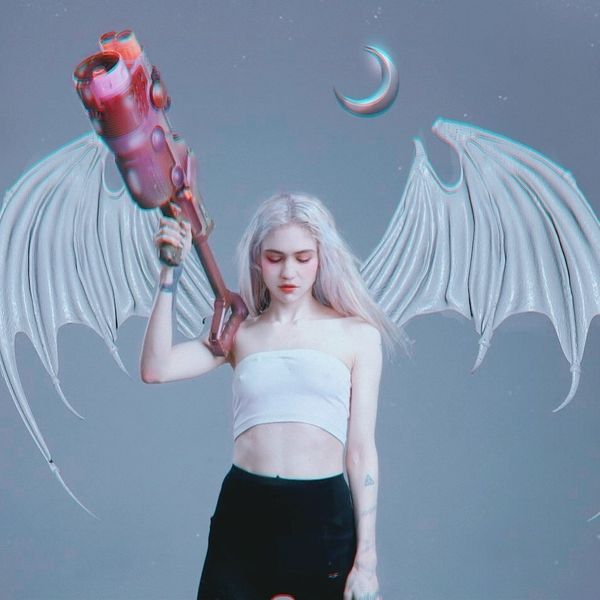 With each subsequent news cycle, it feels like it's getting harder and harder to explain what the hell is going on with Grimes. First off, without any evidence to the contrary, we must assume she is still dating Elon Musk for reasons unbeknownst to even herself. Last month she starred in a campaign for Stella McCartney's latest adidas collaboration, sharing her daily workout routine in a caption on Instagram which includes among other things soaks in sensory deprivation tanks, sword fights, screaming, and an experimental eye surgery to which I still don't even know where to begin to unpack that.

Amidst all of that, however, Grimes did give us one bit of news that didn't feel like it was plucked out of a science fiction satire written by a short-circuited neural network: new music is on the way. In an interview with the Wall Street Journal, she revealed that her new album, MISS ANTHROPOCENE, will be a concept album centered on the idea of making climate change feel "fun." She also indicated that it was likely that this record would be the last she would release under the name Grimes, feeling like she has now outgrown the persona.

For those wondering what on Earth that might sound like, we may now have our first clue. Grimes once again took to Instagram to share a new spot for the adidas by Stella McCartney campaign that features her running through a gravely mountainside with a parachute and contact juggling with large silver orbs. The clip features a strange sequence of sounds strung together ranging from trickling water to a gun shot to labored panting and even a cartoonish-ly shouted "Hello." It's all incredibly opaque, made even more frustrating by that video's caption "MISS ANTROPOCENE First Single - Sept. 13."

Now there is no guarantee that the audio in the video and the forthcoming album have anything to do with one another. In fact, shame on me for assuming it would actually be that straightforward. Maybe Grimes is really into the work of experimental composer John Cage. Maybe the clip is just the entire album hyper-compressed in a few seconds. Maybe humans in this epoch aren't meant to understand it. Maybe it's not even supposed to be listened to as "music." Who knows? I certainly don't.

That said, we can at least now look forward to September 13th as being a day when we will get some answers (even if they likely will only beget more questions).