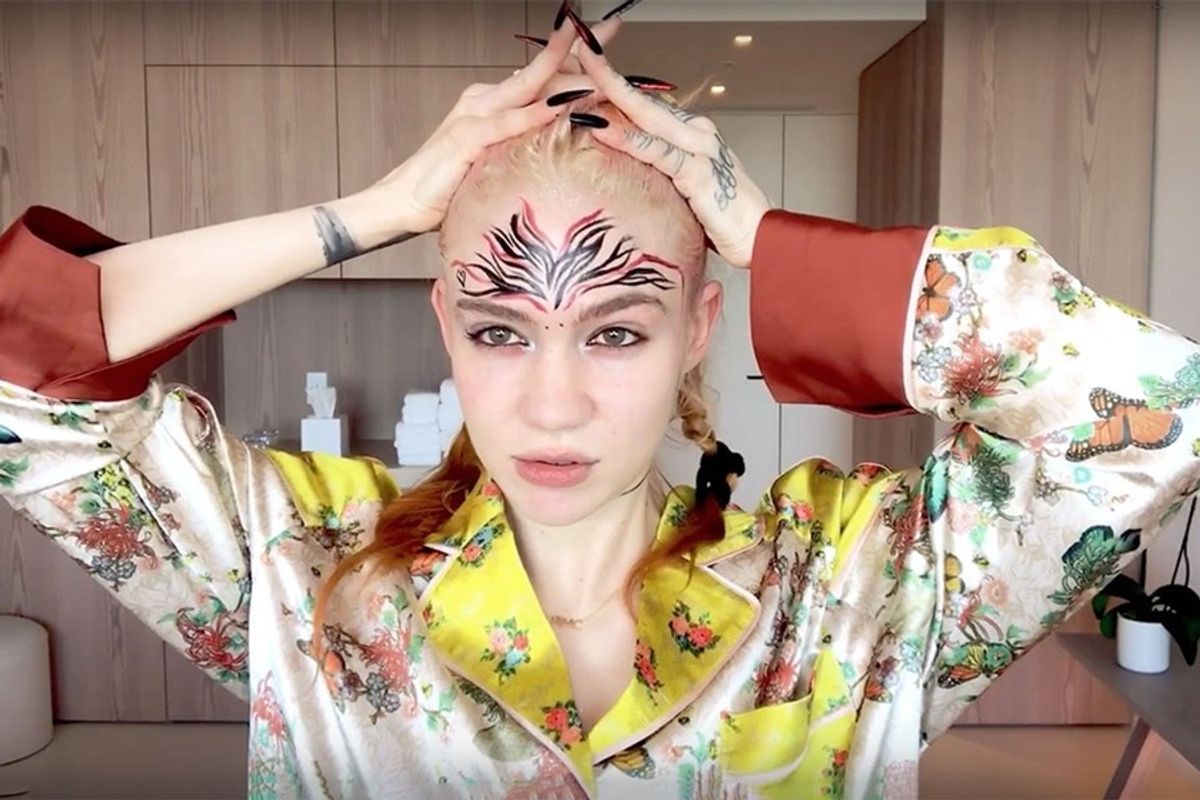 Grimes' Beauty Routine Is Exactly What You Think

If you're going to watch one thing today, please make it Grimes' beauty tutorial. The currently pregnant singer collaborated with Vogue to drop an extremely weird skincare and makeup routine. But honestly, what else were you expecting?

Launching right into her skincare routine, which she has only been into for the past year, she says: "All my skin-care stuff is something I started doing in the last year cause I was like, 'Oh shit, I'm 30 — actually, 31 now — I better start taking care of myself. Well, whatever. It's showbiz."

She also had some doubts about the redness on her skin after being "knocked up": "I don't know if everyone has this, but when I got knocked up, my skin just turned super red and was constantly covered in stuff."

Proceeding to slather on the iS Clinical's brightening vitamin C serum and the Shangpree eye cream, she finishes with a quick facial massage with a rose quartz roller. "This is 'chill vibes' skin," she says before spreading on the Biore UV Aqua Rich Watery Essence sunscreen.

Onto the makeup, she starts with the NARS lightweight Pure Radiant Tinted Moisturizer, followed by a Marc Jacobs eyeliner inspired by an edgy "tears of darkness" vibe as the liner comes down her face after a few hours. She enhances this look by drawing bags under her eyes because it looks "demonic." What did I say about this being weird?

Citing the the video game character "Eva" from Metal Gear Solid 3 as inspiration, she says in typical Grimes fashion: "I like the the idea of looking pretty, but being ravaged by war."

She also loves the eco friendly glitter brand Bioglitz, because of course, the environment. Now onto the hair, which she slathers in coconut oil and started secretly dying at the age of 11. She adds she is obsessed with bleaching and basically burned all her hair while doing it recently. "Being pregnant is great for your hair—I've had a lot of regrowth," she says. "I burned my hair off right before I got pregnant, but it's kind of been solving the situation." Ooof!

Anyway, she is now being responsible by letting her friend, a "professional," bleach her hair, instead of doing it herself. Lastly, evoking her true artist self, Grimes finishes the video by painting her forehead in intricately drawn lines using a black eyeliner.

"I do a lot of painting and drawing, so if I have a show or something, I sort of draw things on," she explains. "It might be pretty strong on the forehead. Yeah, if you have bleached hair and you pull it back it's less crazy. Well, it's still crazy, but it's a little bit more sci-fi."