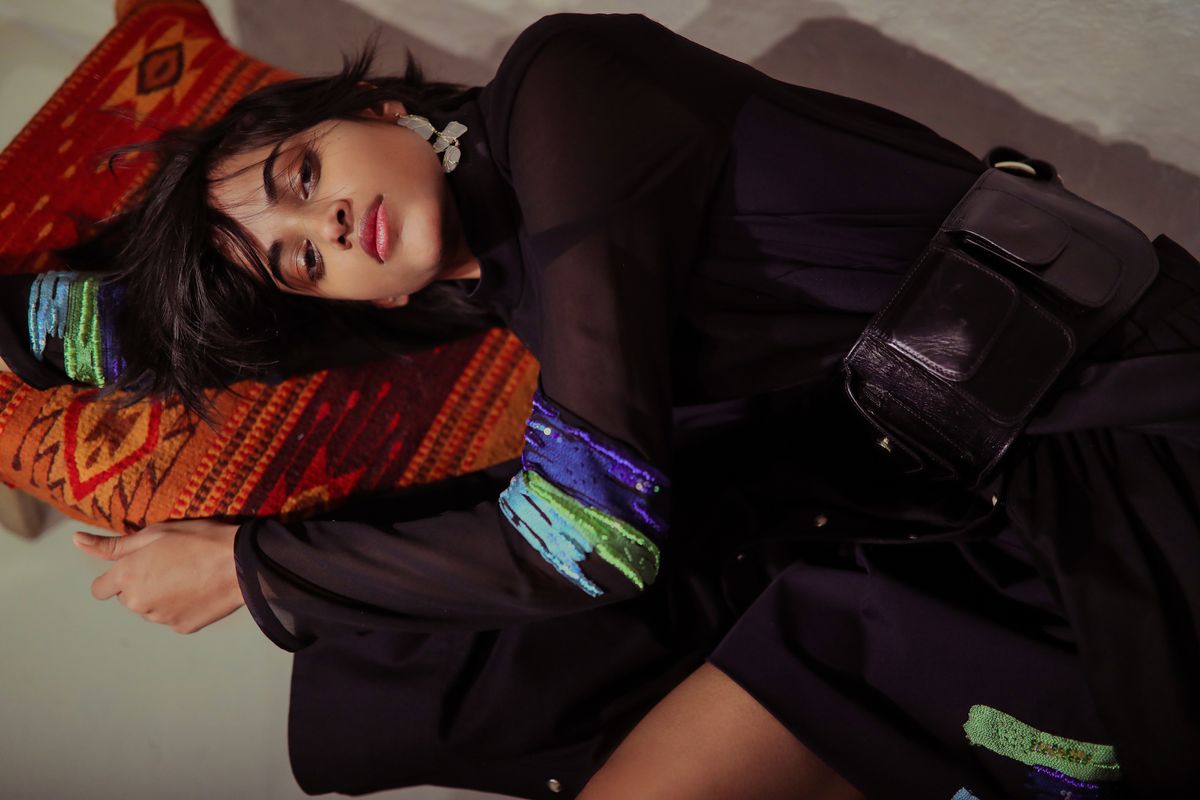 6 Brands Proving Sustainability Is Anything But Basic

While studying economic relations at the prestigious Moscow State Institute of International Relations, Leonid Batekhin was dreaming about fashion. "I would draw clothes during lectures and seminars," the New York City transplant admits. "I was still a good student! I always had good grades, but my heart was always elsewhere." Upon graduating in 2010, Batekhin gave into his childhood dream of pursuing fashion by enrolling in The Parsons School of Design. After completing BFA program in 2015, he landed at Narciso Rodriguez, consequently picking up on the Cuban-American designer's razor sharp cuts and discerning sense of color. During a two year stint at Protagonist under Georgia Lazzaro, Batekhin took a deep dive into design and product development. "When I was beginning to think about starting my own line," he says referring to the early stages of Occhii in 2017, "one of my mentors gifted me with a book called Scraps: Fashion, Textiles, and Creative Reuse. I devoured it in a day or two."

A section on reusing waste textiles inspired Batekhin to contact a silkscreening factory in Pavlovsky Posad—a town 42 miles east of Moscow renowned for its traditional Russian wool scarves festooned with intricate paisley-like motifs. To the factory personnel's surprise, Batekhin was interested in purchasing the faulty, deadstock fabrics covered in paint drippings, holes, and print defects. He soon transformed the shawls into unisex silhouettes wrought with a wabi-sabi perspective. "The idea of imperfect beauty is something that is intrinsically close to me," he says. "It relates to the beauty of the unique as opposed to the seduction of the standardized."

By bringing a Russian folk garment typically worn by women into a contemporary, gender-neutral context, he's also pushing his culture forward. "I don't want my heritage to be restricted by politics or established norms," Batekhin insists, referring to gendered notions of dress in conservative Russian culture. "It's a thing of the past and I want to build a new norm." In that sense, Batekhin's take on sustainability has as much to do with recycling as it does with the values we uphold. "It's what I like to call emotional sustainability," he quips.

After studying footwear design in Milan, Jane Frances spent months working in a family-owned, boutique shoe factory in Northern Italy. When she launched her footwear label Dear Frances in 2014, powering it with skilled craftspeople was imperative. "We work with a fourth generation artisan factory," the London-based designer explains. "They have a great respect and appreciation for the age-old techniques involved in traditional shoe production." Through their knowhow, Frances has created a devastatingly chic collection of streamlined styles from padded sneakers and cork slides to powerful ankle boots and smart slingback heels.

"We strongly believe in reverting back to quality, long lasting styles," Frances says of her label's embrace of slow fashion—an approach that focuses on classic designs made to withstand the rapidly moving trend cycle. While that may seem limiting from a design perspective, Frances revels in it, choosing to rework the proportions, textures, lines, curves, and tonality of her timeless pieces. "The smallest tweak to detail can make a world of difference," she attests. "I really love the process of finding the balance between old and new or classic and modern. It takes time and is never short of creativity."

In addition to investing in longevity, Frances has placed ethical sourcing and giving back at the front of her 5-year-old label. Using materials treated without chemicals, working with non-toxic dyes, sourcing from local farmers to eliminate unnecessary transportation, and reducing waste through small production runs are a few ways the brand is addressing its impact on the earth. In keeping with Frances's belief in moving towards a circular economy—a model that aims to end waste in the design process and rehabilitate natural resources—her brand works with non-profit organizations including Soles4Souls. By partnering with the Nashville, Tennessee based non-profit Dear Frances is helping keep lightly worn shoes out of landfills and bringing them to people in need.

Brooklyn-based designer Christina Tung's nascent jewelry label SVNR (the vowel-less moniker comes from the word "souvenir") is more than a means of upcycling. "I've definitely always had a fascination with found objects," the publicist-cum-designer reveals. "I made jewelry as a kid and collected everything from magazines and stickers to stamps and Barbies." Years later, her penchant for collecting has evolved to antique objects, semi precious stones, shells, and porcelain—all of which are used in her statement earrings.

In its own way, each piece—made by Tung's own hands, yet far from crafty—tells the story of the region that inspires it. "A dealer that I source Chinese coins from for my Luoyang earring told me they date back to the Tang Dynasty [618 AD – 907 AD] and the Han Dynasty [206 BC – 220 AD]," Tung recalls. "The Balinese have been incorporating Chinese coins into their rituals and monetary system since a Balinese king married a Chinese princess in 12 AD." By giving otherwise lost and undervalued treasures like this a new life through jewelry, Tung is archiving history and maintaining a minute ecological footprint. Her designs are also packaged in post-consumer recycled materials including leftover denim from cut-offs and sofa slipcovers.

This spring, SVNR is expanding to include bracelets, anklets, necklaces, and found items from travels that can live as design objects. Tung also plans on making her first foray into ready-to-wear in 2019. To get started she's sourcing raw, vegan silk (for which the worms aren't harmed) slip dresses she intends to stain with natural dyes.

In 2013, the Rana Plaza factory outside of Dhaka, Bangladesh collapsed resulting in 1,134 deaths. At the time, UC Berkeley graduate Shivam Punjya was studying about women's reproductive health in India at Duke University and as a result, interacting with female textile workers in his ancestral homeland. Outraged by the sheer negligence and disregard for human life, the California-native and son of Indian immigrants decided to do something about it.

"We decided, as a family, to partner with some incredible people and organizations to try to redefine what manufacturing in India could look like," Punjya explains noting that his time researching, visiting, and training at factories in India made for an eye opening experience. In 2014 Punjya opened a factory called MSA Ethos in Goraj, Gujarat. Founded in partnership with the nonprofit Muni Seva Ashram (MSA), the facility (run by a predominantly female artisans) launched Punjya's label Behno—which takes its name from the Hindi word for "sisters."

While Behno began as a ready-to-wear line, it has since taken on an accessories focus. The label's six part ethical philosophy dubbed "The Behno Standard" however, has held from the get go. From social mobility and family planning to health, worker's benefits, and women's rights, the model is informed by workers themselves. "Often, policies are top down, when they really should be borne out of grassroots capacity building," Punjya explains stressing the importance of building a relationship with the garment workers. Though he admits, "It's not permanent and will always have room to ebb and flow. Societies change, times change, and we have to keep up."

In addition to its socially ethical practices, The Behno Standard also includes guidelines for eco-consciousness: exotic skins and furs are banned at MSA Ethos, leather is sourced from the meat packing industry, and fabric wastage and carbon footprint are reduced by state of the art machinery. As for keeping the design process just as honest as production, Punjya has a principle for that too: lagom.

"In Swedish means not too little, not too much, just right," he says. "It's often referred to when speaking aesthetically, but I feel that it can be, and arguably should be, visceral." Mindful design and embracing creative criticality is key in implementing lagom. "If we add an extra piece of hardware, and then feel that subtle discomfort that creates a feeling of imbalance, we know we've left lagom," Punjya expounds. "This isn't something that can be taught. It's experienced."

Fashion Institute of Technology alums Moya Annece and Ashley Cimone are avid travelers. The duo launched their accessories label Ashya after a 2014 trip to Kerala and Goa in South India. Preceded by a determined, but fruitless search for sleek, timeless belt bags that would free their hands while on the go, the trip led the Brooklyn-based duo to devote the following years to filling that void.

The resulting collection of low-waste, small-batch bags are made using ethical, highly skilled labor (in safe working conditions) with responsibly sourced materials and hardware made locally in NYC. (Annece and Cimone were recently in Chennai, India exploring and vetting factories and tanneries firsthand.)

For them, mindful design is about more than physical production; it's also about using one's platform to educate. As a result the designers have reimagined the interaction of fashion and travel to create larger conversations around cultural exchange. After exploring their individual backgrounds through design and look book photography—Cimone's roots in South Carolina led them to St. Helena Island and in the region's Geechee-Gullah Nation, while Annece's homeland of Jamaica became a botanical wonderland—the pair is looking to Guatemala in their spring 2019 collection. Namely the intersection of ancient Mayan spirituality (centered on the native Mesoamericans' connection to the earth) and Catholicism.

In their debut experimental short film Men of Maize (directed by Anthony Prince of Equator Productions) a shaman priest named Ignacio Ventura describes the impact of colonialism on indigenous practices and storytelling. "We look to explore little known narratives," Cimone says. "But we can't fully understand those stories since they're not a part of our life experiences. Not imposing other people's stories with your perspective is important. It's social sustainability."

Roopa Pemmaraju grew up in Bangalore, India's "Silicon Valley" located in the southern state of Karnataka. Despite the bustling metropolis's tech boom, traditional silk textiles continue to reign supreme. "My grandmother used to weave her own silk saris," she says citing the custom of passing garments down through generations in Indian families. "In South India we love wide silk borders and Kanjivaram [an ornate silk crafted in Tamil Nadu that's akin to kimono making in Japan]. It's a part of growing up there."

In 2008, Pemmaraju relocated to Australia and launched a eponymous women's ready-to-wear label. "When I moved to Melbourne I noticed this beautiful, modern, beachy aesthetic," she says referring to the city's fashion scene. "But one hundred percent silk wasn't a thing." Natural, luxurious, sustainable fabrications were missing from the market. So when Pemmaraju showed her first collection — an explosion of color on free-flowing silk silhouettes — Australian department store David Jones immediately picked up the line. Though a decade later Pemmaraju has shifted her business to Dallas, Texas, the collection is still rooted in natural textiles.

In addition to maintaining an atelier of 16 artisans in Bangalore, Pemmaraju collaborates with craftspeople around India: the Hindu pilgrimage city of Varanasi produces intricate brocade, while Calcutta supplies a supple, handwoven silk called phulia, and Kashmir is ideal for plush knits. But make no mistake, Pemmaraju's namesake line isn't an east-meets-west mashup. "I don't fuse ethnic Indian elements into my collection. That's not what I'm after," she explains. "Yes, color is an important part of my Indian background, but I create fun, everyday dresses that look beyond trends."