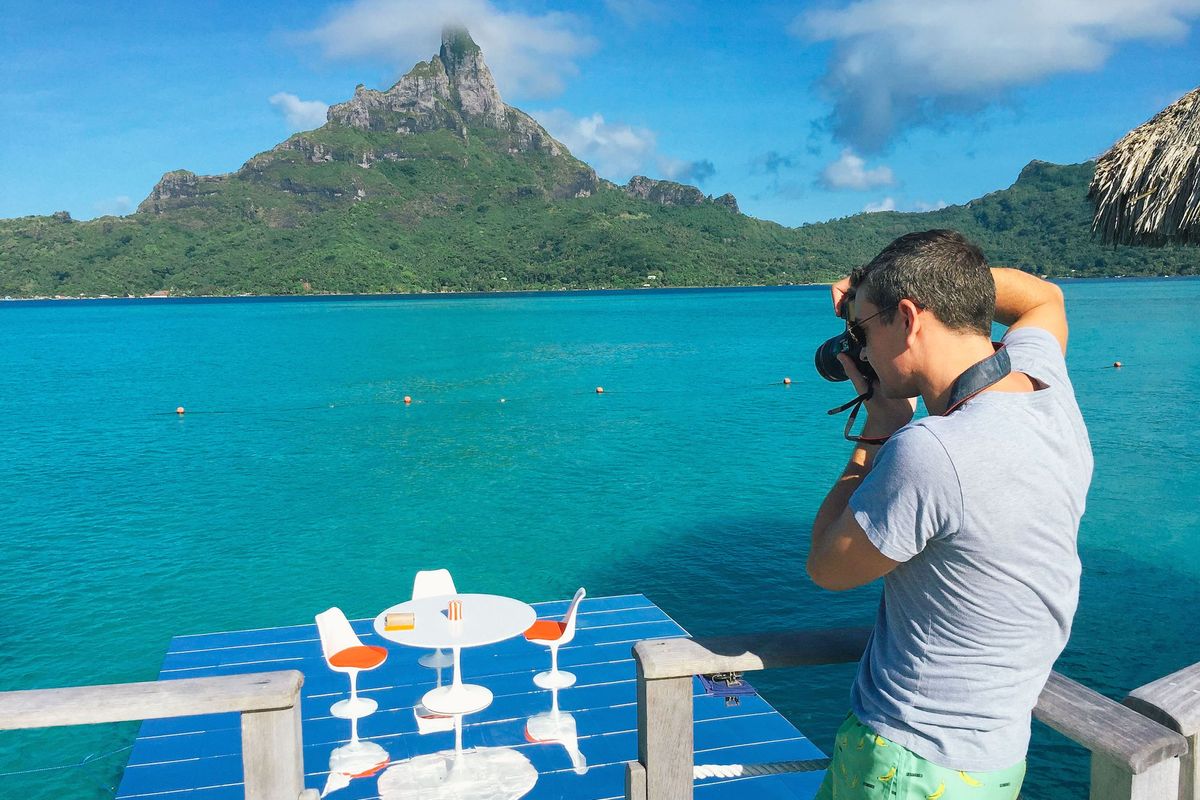 He has a new series, 'The Art of Living,' shot in Bora Bora and out now.

Gray Malin, The Office from The Art of Living series shot at Le Méridien Bora Bora

At the Le Méridien hotel in Bora Bora, Gray Malin is standing on a wooden walkway outside one of the resort's stunning floating bungalows, the whole set-up perched on stilts above turquoise blue water that looks like it's been put through the Valencia filter by God. The LA-based photographer is watching as a man carries an Eames chair while jet skiing to a floating, mirror-covered raft nearby.

This unusual vignette is the result of a new project dreamed up by Malin called The Art of Living. The series, which debuts today at the Le Méridien Picadilly in London during London's Frieze Art Fair, is the latest collaboration between the artist and the hotel brand. (Previously the two teamed up on the "Follow Me" series, which featured photos shot at the brand's properties in Barcelona and Bhutan.) Each image shows a different Mid-century modern set-up (a living room, an office, a patio) that's been surreally transported from Don Draper's living room to the azure waters of French Polynesia. With the furniture pieces placed atop the mirrored raft, the ground reflects the bright blue sky, heightening an effect already made stunning from the ocean waters and the lush mountain in the background.

The concept nods to both the hotel's emphasis on design (particularly Mid-century modern furniture) and Malin's own interest in the design movement. "My great-grandparents had invested in some Mid-century modern furniture that had been passed down," Malin recalls. And "it's something that I personally related to, having grown up with the furniture." But as much as the final effect looks flawless and beautiful, the logistics -- as evidenced by the creative problem-solving of bringing the furniture to the raft via jet-ski -- was anything but seamless, making the whole effort all the more impressive.

Photos from Gray Malin's The Art of Living Series 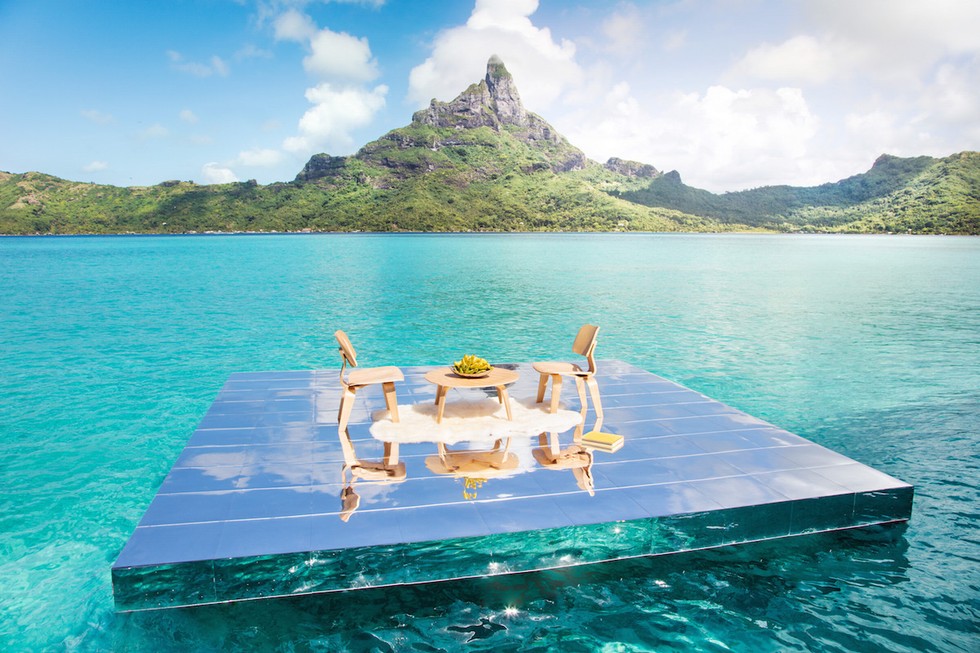 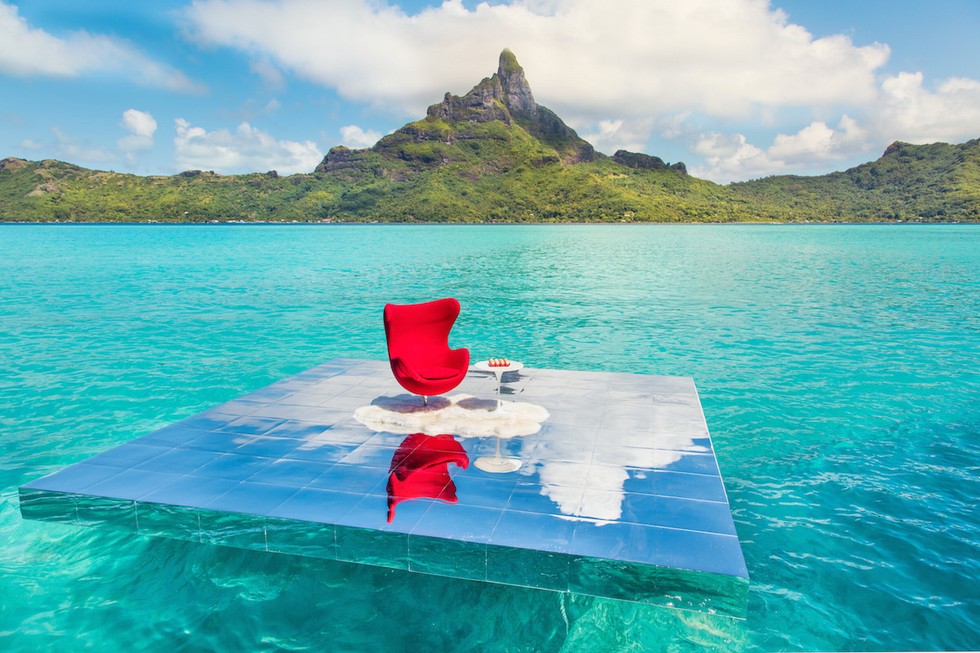 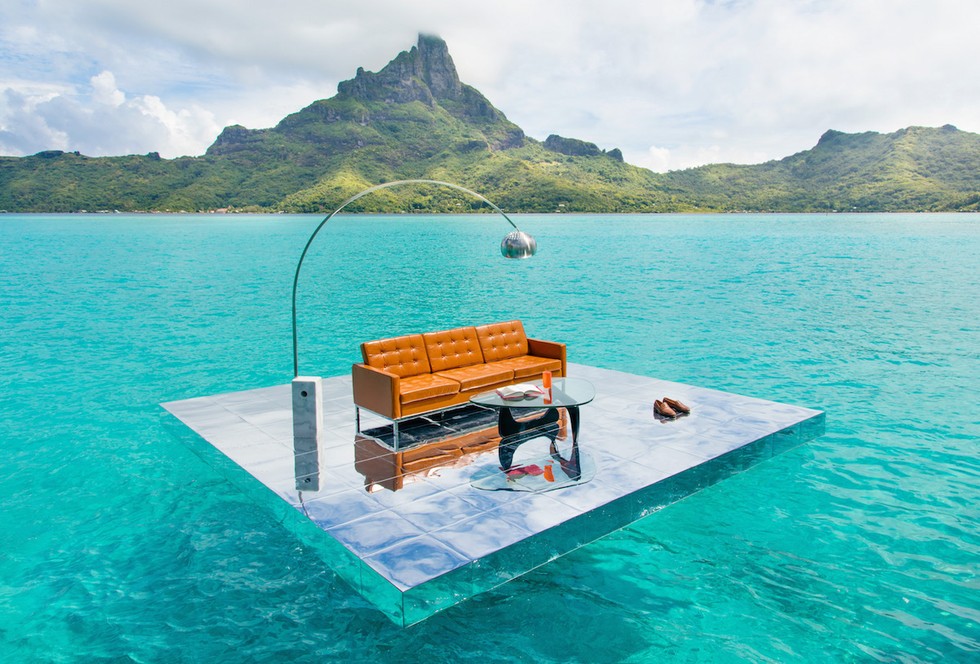 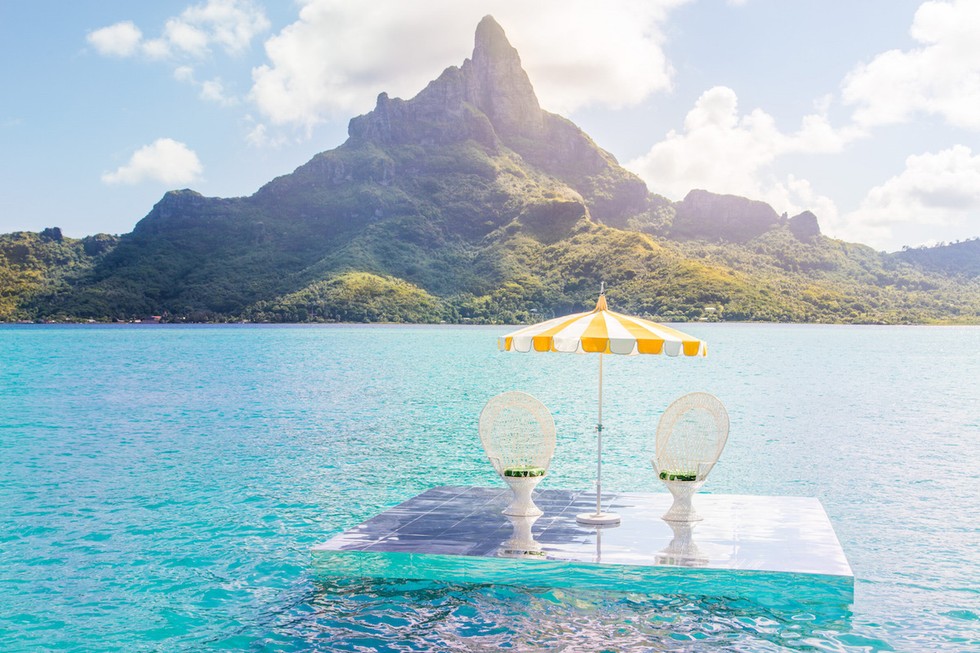 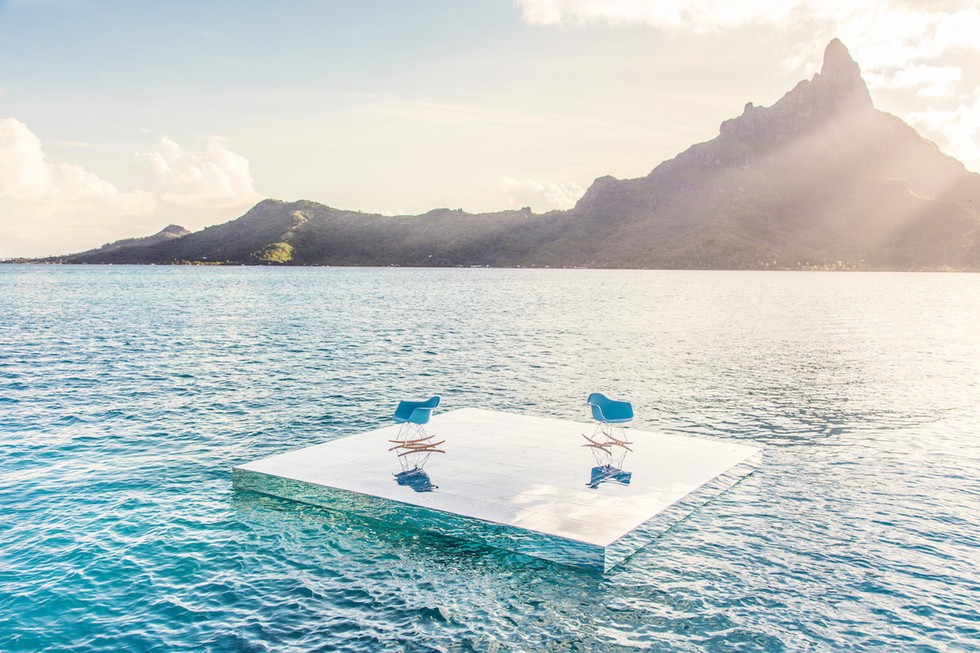 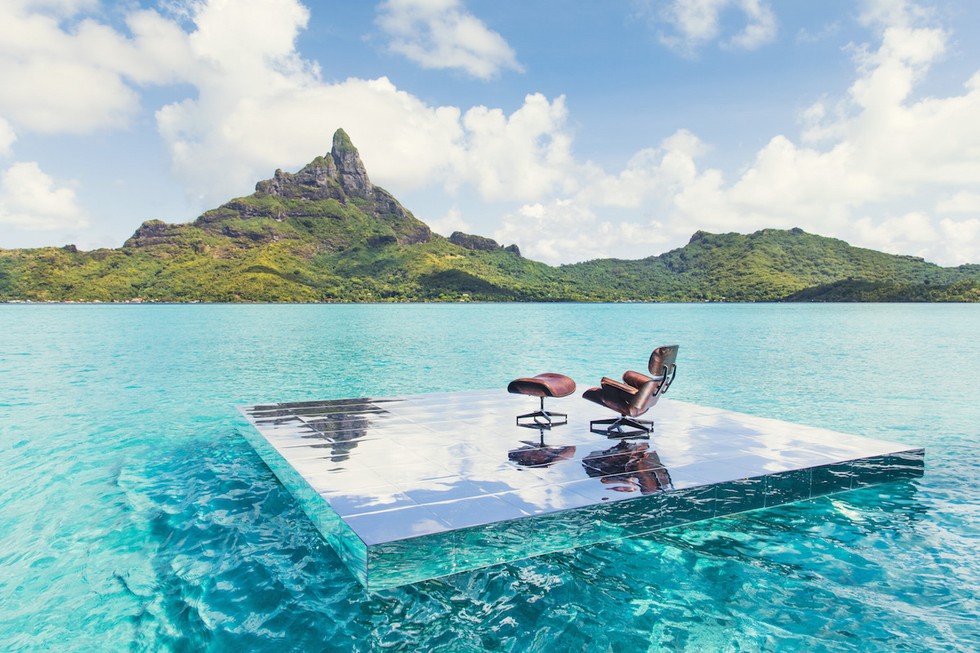 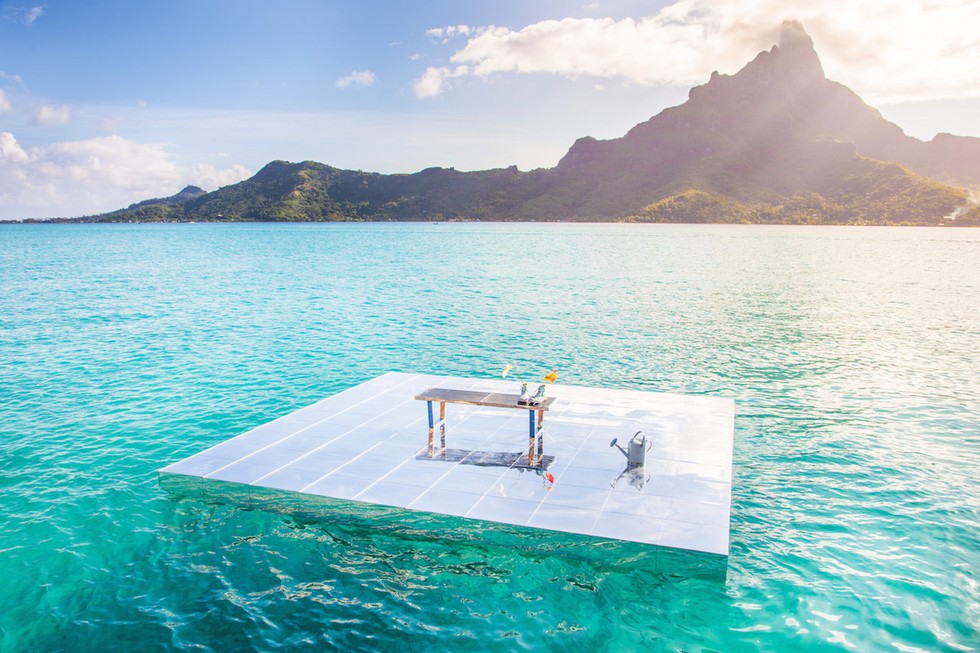 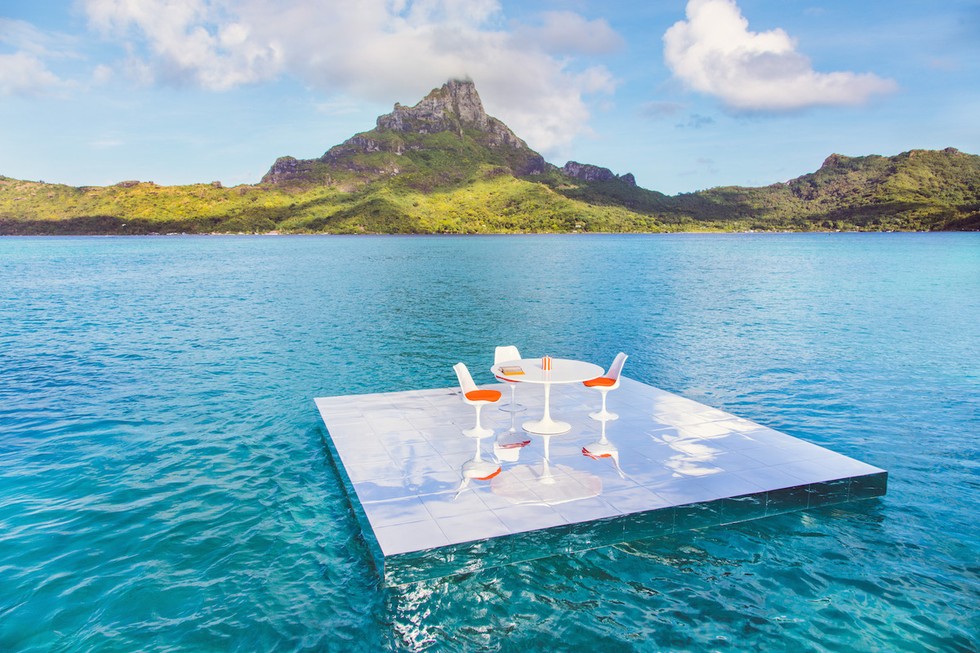 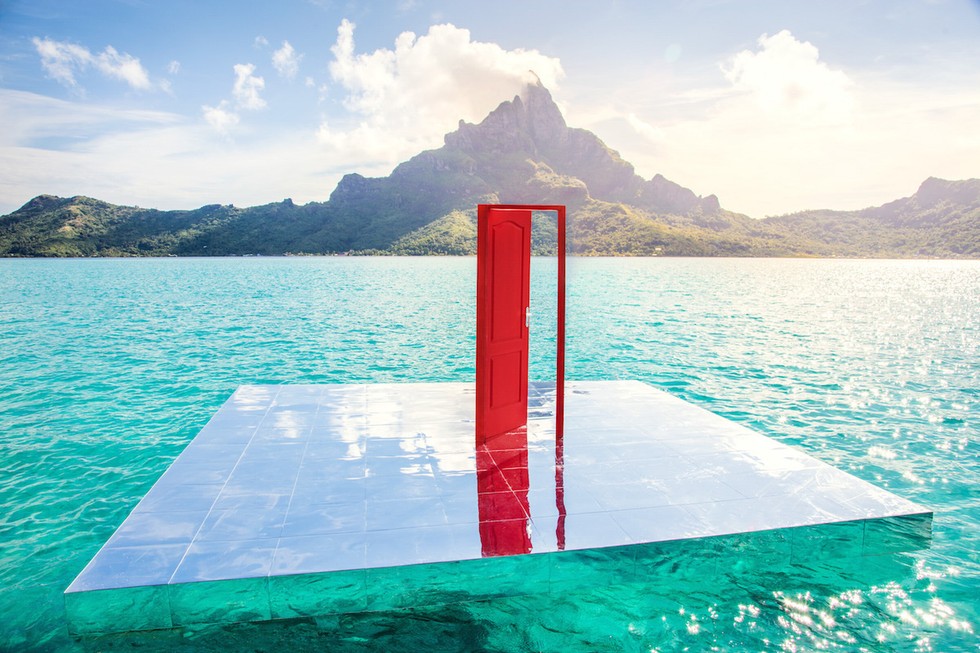 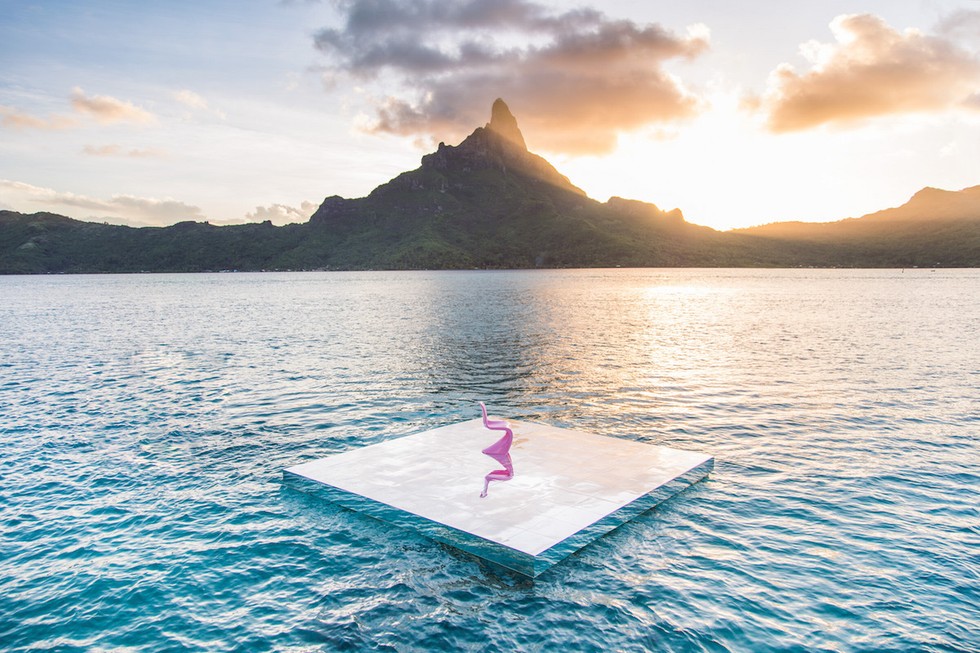 
Though Malin is young, in many ways he's old school. He doesn't want to rely on Photoshop to provide quick fixes and achieve effects that anyone with a camera and a laptop could get. Instead, his modus operandi is more analog whether that means hoisting bulky furniture on jet skis or figuring out a way to ship them from the U.S. and import them into Bora Bora in the first place. "We were fighting the clock," he says about the preparations for the shoot, which began four months prior but didn't really kick into gear until a month before the trip. The furniture "was supposed to be air freighted on a cargo plane but, sure enough, some of the pieces didn't arrive in time so there were multiple cargo shipments and then the entire worry about whether they would clear customs." And even once all of the furniture had arrived and the shoot was underway, the elements provided some limitations. "We were up at 5am working," Malin says, because "we had to stop each day at 3:30pm when the light became too harsh." It was also a Sisyphean task to constantly squeegee the mirrored raft so water drops and splashes from rain or passing boats wouldn't appear in the shot.

This approach is one that Malin's honed since he began taking photos, getting his start selling his prints at a Sunday market in L.A. One of his earliest series was shot in 2010 in Marfa, Texas and features shoppers, cowboys and even an astronaut standing outside the small town's iconic Elmgreen and Dragset installation, Prada Marfa. Since then, Malin's made a name for himself with similarly whimsical imagery often featuring incredible environments (Antarctic tundras, African savannas, Italian coastlines) and unexpected props, animals or people (hot pink zebras, plastic flamingos or llamas) popping up when -- and where -- you'd least expect them. He's also found many fans and collectors flocking to his gorgeous aerial shots of beaches, ski slopes and city parks, among other settings.


Malin, his team and Le Méridien Bora Bora staff preparing the raft and setting up a furniture piece

While many of his prints -- and the images from his Art of Living series in particular -- are at a higher price point, it's important to Malin that fans of his work can find many different ways to enjoy and collect it. His partnership with Le Méridien may be one of the best examples, with the hotel displaying photos from Malin's portfolio on video screens throughout many of their properties around the world and on keycards. He's also looking to expand into the home furnishings department with bar trays that feature his prints and recently released a book, Beaches, that has gone on to become a New York Times bestseller. He's also collaborating on a water bottle line with S'well. For Malin, the sense of excitement, joy and wonder he gets when he travels to any of these exotic destinations is the same feeling he hopes his collectors receive from his work -- not a sense of exclusivity or elitism. "It's very important that when someone sees a Gray Malin photo, they don't feel intimidated by it," Malin says. Instead "I want them to feel mesmerized and inspired. That's always been my take on the art world."