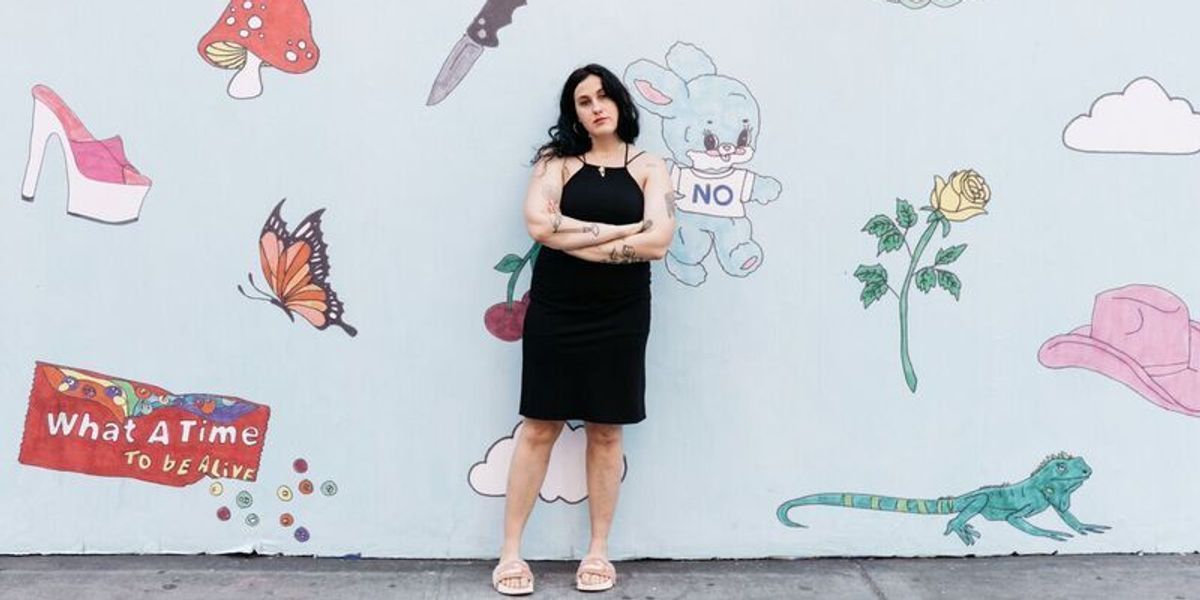 What do hot Cheetos, Furbies and feminism have in common? Grace Miceli and her art, obviously.

Miceli, better known on the Internet as @artbabygirl, has made a name for herself by turning her passion for pop culture, doodling and social awareness into prints and apparel (like a hot pink baseball cap) that present a challenging and sly feminist edge cloaked in cute. Her latest piece is also her first large scale work, a mural in the Lower East Side, part of the Artist Series on the wall of the shop Tictail that sells Miceli's subtly subversive gear, as well as clothes from other emerging designers. PAPER chatted with Miceli about branding yourself, the wisdom of Young Thug, and that ever-present Internet boogey monster, clickbait.


Would you consider your Instagram a brand? How do you distinguish your online persona from IRL Grace Miceli?


l definitely use my Instagram as a platform for all of my projects. It's the way that I communicate with people, so I take into consideration the branding aspect of it, of course. But you know, I never want it to feel just like that. It is so great [though] that there are these platforms to utilize in order to reach so many people. That's amazing. I want my personal voice to be heard on my social platforms.

When did you start noticing your Instagram was getting a lot of attention? How do you think this came about?


It's just been time! I've been working in the way that I have been for about five years now. And before I was mostly working on Tumblr -- that's where I first started posting my drawings. So I started working this way towards the end of college, where I didn't feel comfortable sharing this work at school. I did photography and worked in a much more serious medium. Then I started to work with these illustrations, I wasn't sure that it was going to be taken seriously in school. I started posting it online and the feedback I got was great. It's been about five years and I'd say it's just been the past year that the Instagram has really grown. I have a lot of really supportive friends who have larger followings and that's obviously helped me grow -- the support of other female creatives that I've worked with.

Totally. So can you tell us a little bit about this mural you're painting right now?


I've used Tictail as a platform to sell my art prints and my books on for at least 6 months now -- maybe a little longer...Since I've been freelance the last few months, I'm really looking for ways to collaborate with people [and] with brands with visions they feel strongly about. So yeah, I just kind of reached out and was like 'Hey we should do something'. I did a pop up with [Tictail-affiliated artist] Daniel Zender and through him is how I first saw that they had a space for that mural. So I just reached out about collaborating -- with not necessarily the mural in mind -- but yeah, we decided to do that and it's my first large scale public space piece that I've ever done.

The illustrations on the mural, how'd you choose them? Are the drawings all purposeful or is it more of a natural process?


I think it's a combination of those things. I kind of look at [each of the illustrations] that I'm using as symbols for [bigger] things. So while some of them [might just be chosen] to make someone smile and be really playful, there are definitely others that I want to be taken a little more seriously. And I think that that combination, the balance, is something that I'm trying to push for and look for.

Is that why your works are so heavily indebted to pop culture?


Right, so I see pop culture as almost a language that we communicate with--not everyone, but if you have access to a smart phone, or the Internet, [you use it]. For me, I'm always kind of thinking about it and referencing it. So it just makes sense that I pull in those symbols and references in my work. It's something that's very prevalent in most people's every day lives, for better or worse.

How would you define 'art' in your own words?

So a lot of your art speaks to feminism and social awareness in general, but I understand that you're kind of conflicted with being identified as a 'feminist artist'?


In no way am I conflicted about being identified as a feminist -- I am conflicted with always being identified as a feminist artist, or a female artist. Men are never male artists. People of certain ethnicities, they often use that [as a defining trait as well]. I don't understand why we have to exist in relation to something else. I'm 100% a feminist, that's never something in question. Sure, sometimes I make work that deals with gender and being a woman, but more often, I don't. I think that, sure, when it's relative, you can call something that I make a 'feminine piece' but I don't understand why I have to exist always with that definition. There are lots of things that I draw that have nothing to do with feminism.

While we're on the topic of feminism, I know you once brought up the idea of 'clickbait feminism' in a Fader interview. The whole 'clickbait' thing is also a concept that the fashion industry seems to be latching onto lately, especially in terms of gender fluidity. What do you think? Is the rise in things like unisex lines genuine or is it just trendy?


Yeah, I was thinking the same thing the other day. My thought about all of this is that brands and money are always going to be a part of it. That's something you can never avoid. I don't see [the fact that companies like] Zara are taking on this idea [as] necessarily changing anything, but I don't see anything bad with it either. If you're going to make the general public more comfortable and aware of something, I don't think there's anything wrong with that. Which is how I feel about clickbait feminism as well. You know, it's a very one-dimensional understanding of something very complicated.

[When I think of the whole genderfluid fashion trend though, I think of] the new Calvin Klein campaign with Young Thug who mentioned 'there's no such thing as gender'. For me, sure, he's in an ad campaign talking about this, but at the same time, for someone who's such a huge and influential voice in hip-hop to be saying something like this, that's incredible. And the same thing for mainstream actresses with millions and millions of followers to say something as simple as 'I'm a feminist.' Maybe they're not really doing things to change things directly, but just by putting the word 'feminist' [in front of their huge audiences] to generalize the term is amazing. Obviously, it can't stop there -- there's so much more to be done -- but who knows how you're going to discover these topics. Not everyone has access to academic texts. It's simply an access point for people.

Right. So back to art, if you could collaborate with anybody, be it an artist, celebrity or company, is there anyone that comes to mind?


Like I mentioned, I really love Young Thug. I don't do styling necessarily, but I'd love to do custom pieces for certain people. I really love Rihanna and I love Drake, but I talk about him too much, so maybe I should stop. I also recently started doing album art, so that's something I think I'd really like to get into. And again, working with certain demographics, I want to start making work for audiences like straight teen boys. You can't have this separatist ideal -- like the idea that feminists hate men. I want to start making work that will make different groups understand and be exposed to each other. So that's what I'm excited to start doing.

You mention studying photography, but did you ever study drawing and fine art?

No, no. I mean I took drawing and I was actually terrible. I can't do realism, or look at something and draw it. In class, I was always painting with my feet or whatever. I have a problem with getting an assignment and executing it. I kind of just do my own thing. I don't have traditional training, it's more of an amateur style. I studied photography, but I was too impatient for that medium. It didn't work for me. With drawing, there's more of an immediacy between the actions and the results, which I find great. I can work a lot quicker and do twenty drawings a day. It allows me to experience a lot more than with other mediums.