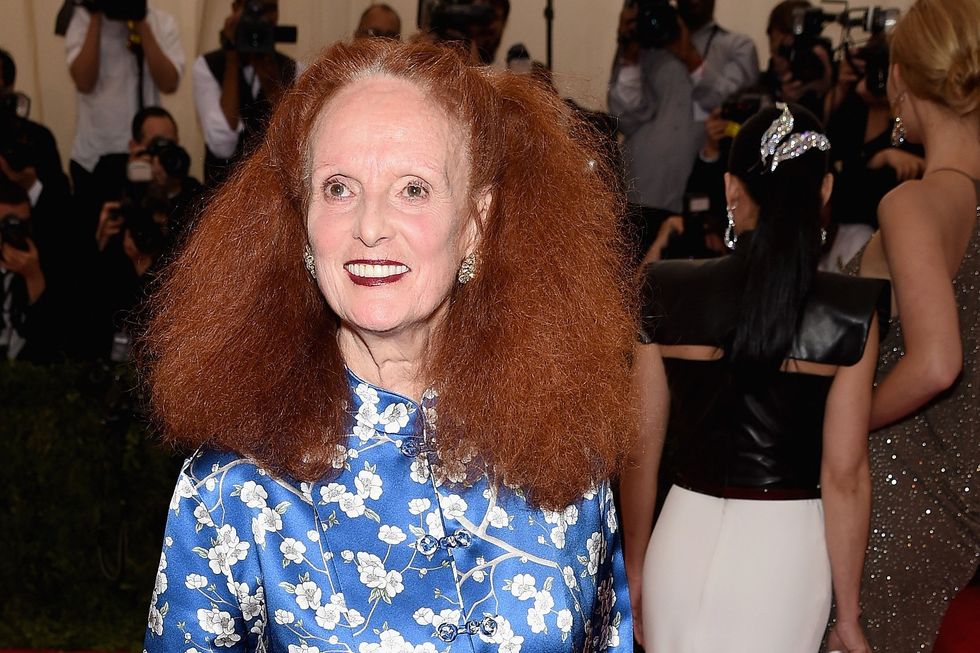 The news this morning that Grace Coddington, the venerated and much-adored creative director of Vogue, would be stepping down from the job she has had for the last 28 years was met with well wishes and loving tributes across the industry. It signals the end of an era at the fashion bible or perhaps more specifically, the end of the daily working relationship between Coddington and her boss, Anna Wintour. The two women's spirited sparring over the content and vision of the magazine was the focal point of the 2009 documentary The September Issue, of which Coddington was the break out star. According to Business of Fashion, who broke the news, she will take on the role of Creative Director at Large and still contribute fashion stories (at least four spreads a year and will retain an office at the 1 World Trade headquarters) to the magazine. She cites personal projects as one of the major reasons for the move, notably a fragrance launch with Comme des Garcons, a reissue of her book Grace: 30 Years at Vogue out this fall, including some of her more recent work, not to mention the development of a film based on her 2012 memoir.

The daughter of Welsh innkeepers, she went on to model in London in the swinging '60s and after a car crash effectively ended that career, she became a fashion editor at British Vogue in 1968 under Beatrix Miller. She famously favored shooting models, having been one herself, over celebrities. And to be picked as one of Grace's 'favorites' could make an up-and-comer's career as much as landing a big campaign or cover (Karen Elson and Natalia Vodianova fall into that camp, to name a few). More so than anything, Grace's pictures favored a fantastical, dream-like interpretation of fashion, with renowned photographers like Annie Leibovitz, Steven Meisel or Bruce Weber. Who could forget her Alice in Wonderland portfolio with Marc Jacobs and Nicolas Ghesquiere, The Wizard of Oz with Keira Knightley, or her 1920s flapper story in September 2007 with Meisel which was a major plot point of the documentary? A reductive view of that film was to see Grace as the heart of Vogue softening Anna's steely pragmatism but it was, like any decades long relationship, more nuanced and trusting than adversarial. There is perhaps no one in all of fashion who could challenge Wintour the way Coddington could, which was to the benefit of the pages of Vogue. The irony of her departure, towards a no doubt lucrative career on the commercial side of the industry, is that it would not have been possible without Wintour's pioneering vision for the last thirty years of fashion as a global, financially viable industry that marketed fashion personalities to be bought and sold to the many and not an exclusive, cottage industry.

Is Grace's soft exit from the masthead the death knell of Vogue? Hardly, as veterans like Tonne Goodman, Phyllis Posnick, and Camilla Nickerson are not going anywhere. But it indicates a more macro change in the industry as legacy print titles rethink their strategies and veteran talent exits, diplomatically or otherwise. Coddington had a finicky relationship with digital, as evidenced by her indignance over the blocking of a topless illustration she posted on her instagram and the app's general ethos of narcissism. Which is to say, the way fashion is communicated since Coddington began in the 60s has drastically changed and will continue to adapt to the moment. But what has not changed, and what is perhaps the greatest testament to her work at Vogue, above all of the timeless and breathtaking images, is the importance of trust and honesty between two strong editors. That works across all platforms.