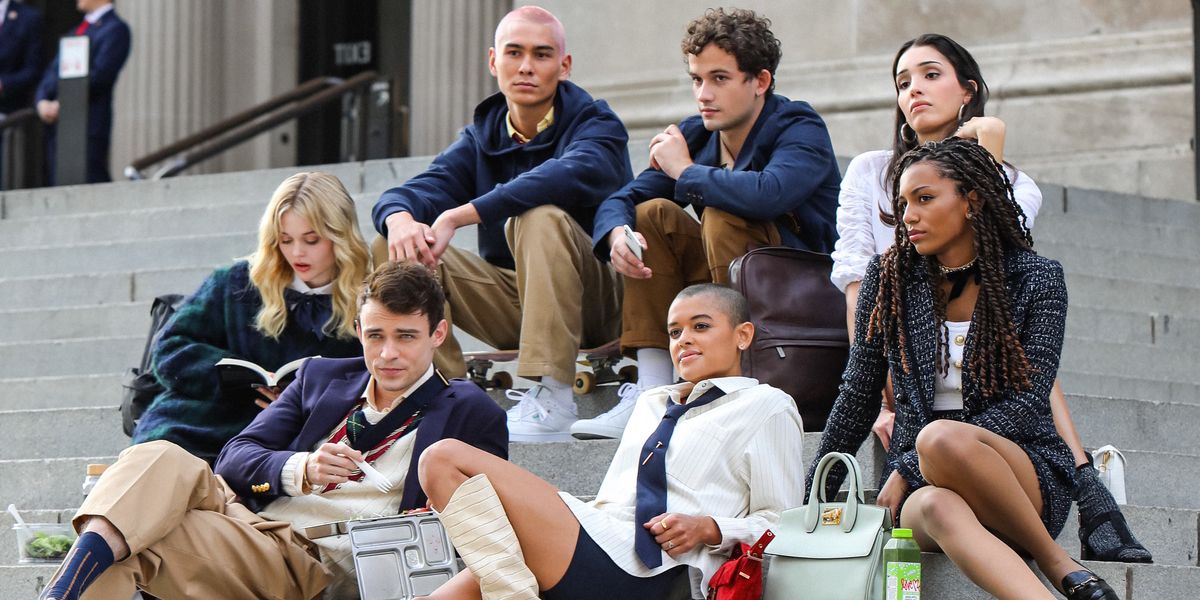 Here's What the New 'Gossip Girl' Characters Will Be Wearing

Since Gossip Girl graced our screens in 2007, a lot has changed with how the world views social media, technology and fashion — all prevalent themes throughout the show's six seasons. The rebooted franchise, set to premiere on HBO in 2021, will act as an extension of the original series set in the present day, according to Harper's Bazaar.

This morning, the internet got its first look at the new cast at — where else? — the Metropolitan Museum of Art through paparazzi photos of Jordan Alexander, Emily Alyn Lynd, Thomas Doherty, Eli Brown, Zion Moreno, Savannah Smith and Evan Mock (making his acting debut!). They were all spotted filming a scene on the Met steps, Blair Waldorf's iconic go-to spot for breakfasts and takedowns.

We'd be remiss to mention this without discussing their clothes, which played a big part in the Gossip Girl's influence. Thanks to the show's original costume designer Eric Daman, who's returned to dress the new cast, the reboot is shaping up to be equally stylish.

Fans will recall the glamorous outfits the uber-privileged UES teens wore to a dizzying array of soirées and parties, as well as their style evolutions after graduating from high school. However, the best looks came from Daman's subversion of the leading ladies' private school uniforms (usually some form of a dark skirt and bright top accessorized with high-end shoes, bags and jewelry).

Much like how Blair, Serena and Jenny donned wares by Marc Jacobs, Tory Burch and Valentino to rule the halls of Constance Billard School for Girls, this new generation's female leads are equally fashion-forward (sorry, guys — the St. Jude's School for Boys' uniforms pale in comparison).

Alexander's character wears a reptilian pair of Schutz kitten heel boots, accented with a Fendi Baguette and a Cartier pin. Smith carries a mint Ferragamo satchel (containing a Prada cosmetics bag), paired with Sam Edelman platform loafers and a tweed skirt suit. Lynd wears an oversized sweater and heeled loafers — likely designer — while Moreno wears a bohemian take on the Constance uniform. Even OG influencer Tavi Gevinson was spotted, clad in Blair Waldorf-worthy trousers and cardigan, for her role in the series.

As for the eveningwear, we're already welcoming the excess. An additional pap shot showed Alexander in a Christopher John Rogers Spring 2021 gown, with Moreno alongside wearing Giambattista Valli. Of course, we're already anticipating similar photos as the show films in New York City, so there will surely be more fashion moments to come before Gossip Girl's premiere.