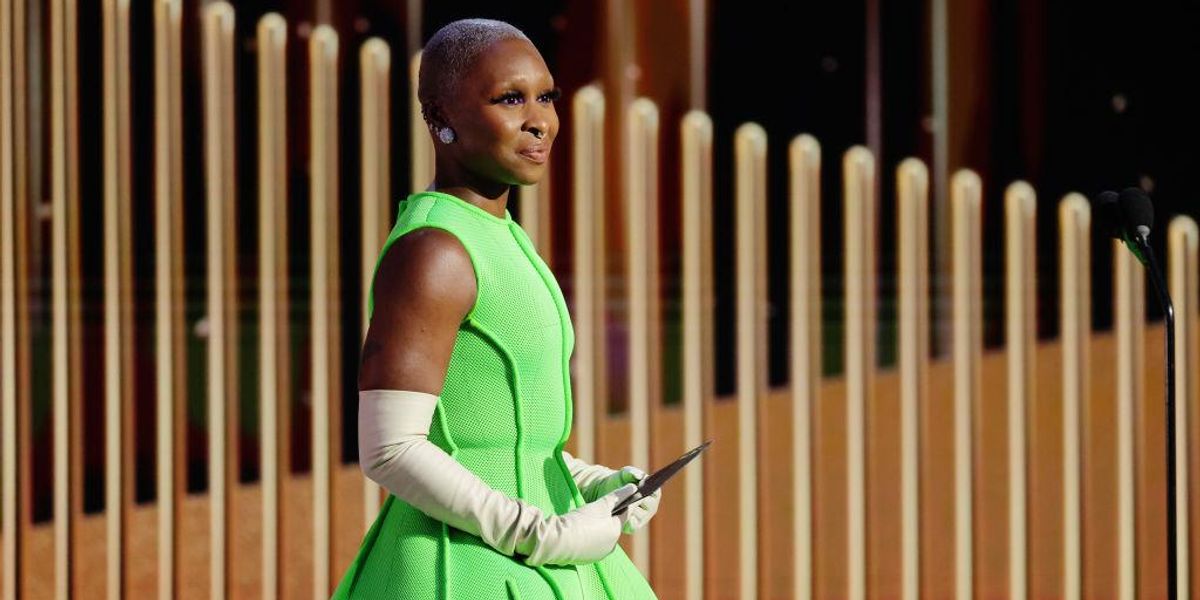 It was a night that happened! I'm referring to Sunday's 78th Annual Golden Globe Awards. "Could this whole night have been an email?" co-host Tina Fey quipped from New York City's Rainbow Room while her co-host Amy Poehler stood in the Beverly Hilton, where the ceremony is usually held. She made a good point.

From the outset, things were a bit unrefined, with a bad connection temporarily silencing Daniel Kaluuya mid-speech after picking up the night's first award, Best Performance by an Actor in a Supporting Role. Moments later, the connection improved and he was able to make his speech, but the symbolism of an award ceremony criticized for a governing body with no people of color silencing a Black actor during its telecast was hard to miss.

Related | See What Everyone Wore to This Year's Virtual Golden Globes

But things were off to a bizarre start even before the ceremony began, with an air of despondency in the internet connection between celebs and the red carpet hosts. Blame the wifi sure, but even the celebs seemed unwilling to perform the pomp and circumstance without the promise of endless champagne and ritzy gift bags. "I'm alone in a hotel room in Prague," Gillian Anderson (or Jill E. Anne Anderson, as Giuliana Rancic referred to her as) revealed during E! Live From the Red Carpet. Some tried to muster positivity. "It's so fun to be able to dress up," Angela Bassett told Rancic on the red carpet, mispronouncing her designer's names ("Dole-chee & Gabbana") in what I choose to interpret as shade.

But lest we not forget the 2020 Emmys, also a virtual award show, which gave us a number of dazzling and unforgettable red carpet moments including Zendaya in Christopher John Rogers, Regina King in Schiaparelli and Yahya Abdul-Mateen II in Louis Vuitton. So there was both precedent and a high bar.

One of the glass half full aspects of a virtual red carpet is the opportunity to create award show editorials as was done in the past with Regina King and Sandra Oh and executed once more with stars like Viola Davis, Amanda Seyfried and Elle Fanning. It's ingenuity like this that allowed us at home to be able to see the dresses in their full length glory, an opportunity we weren't given with many looks that I imagine would have garnered more conversation (see: Nicole Kidman in Louis Vuitton and Kristen Wiig in Prada).

Another "secret" weapon deployed by nominees like Cynthia Erivo and Dan Levy was the pop of color. Silhouette, sheen, material are all things that can get lost without the benefits of award show camera technology, but color always comes through. Below, some of my favorite looks in no particular order. But please understand that when I say Cynthia Erivo was best dressed of the night, I'm saying it with my full chest.

It's giving key lime pie. It's giving Lil Nas X at the 2019 American Music Awards. It's giving unfettered elegance. "I. Love. This. Dress!" Erivo told me over Instagram voice memo moments before walking out on stage to present Best Screenplay. "I love how I feel in it. I'm loving the reaction from people. You know me: I just go bold and have fun with it and play. And it seems to have worked out tonight." It really did.

Ever since Elle Fanning stepped out at the 2019 Cannes Film Festival red carpet in a full tulle skirt, sheer shirt with pussy bow, and black macramé hat from Dior, I knew Fanning was signaling ascension. One thing I've particularly loved about the pairing of Elle and her stylist Samantha McMillen is a willingness to deviate from the obvious (she recently slipped into a Bora Aksu FW21, for instance). It's uncomplicated, yet regal, like the character she plays on television Catherine the Great. Note the crystal embellished straps, which really seal the deal here.

"I am a very big movie buff," Oscar de la Renta Creative Director Fernando Garcia tells me over Instagram voice memo. "I have always loved the movie industry more than fashion almost. It's what drove me to become a designer. And when I was seeing reports of Amanda doing Mank, I knew she was going to be one to watch this season. So when the nominations were announced I literally whipped out 10 sketches on the spot and Amanda and [stylist] Elizabeth [Stewart] picked one right away. Amanda knew what she wanted — to be very unabashedly feminine — so we went for the full sorbet floral punch. I was very fortunate that I was able to socially distant travel to Savannah, Georgia and do a proper fitting and I'm very thankful that people like Elizabeth Stewart are stylists that understand the importance of human connection between their talent and the designer. It is something that is perennial to create something beautiful for a person, and she's one that understands the importance of permeability in the industry."

Corrin, who picked up her first Golden Globe for Best Actress in a TV series, Drama, has been working with stylist superstar Harry Lambert from the outset of her debut on The Crown, a pairing made in fashion heaven. Together they've been bold, fanciful, and irreverent — one of my favorite qualities in one's style ethos. "We worked with the Miu Miu design team on this custom look," Harry Lambert tells me over an emailed voice memo (sensing a theme?). "We were highly inspired by Pierrot the Clown, a French pantomime character, and wanted to mix that with old school Twiggy. It was really important that we had some drama with big shoulders and had some fun with the make-up. This was going to be Emma's first big red carpet so we wanted to do something fun and editorial and impactful." Mission accomplished.

A lot of conversation online about Jason Sudeikis's tie-dye hoodie. I don't wish to contribute to that discourse. And in that same vein: I don't believe in doing worst dressed lists. It feels, to borrow a word that Madonna invented, reductive. But if I was: Margot Robbie in Chanel. But I'm not!

Overall, how you feel about the success of this year's Golden Globes — both the ceremony and the red carpet — really depends on your vantage point. Is your disdain for the capitalist greed of Hollywood exacerbated by seeing rich folks in fancy dresses amidst a global pandemic still not under control? Are you grateful for the opulent distraction? Did seeing stars like John Boyega, Chloé Zhao and Andra Day picking up trophies signal a tide change in the overwhelmingly white nominations list? Or did a verbal commitment toward "creating an environment where diversity is the norm, not an exception" by members of the Hollywood Foreign Press Association mid-show feel hollow? That's for you to decide.

But the gowns? Beautiful gowns!