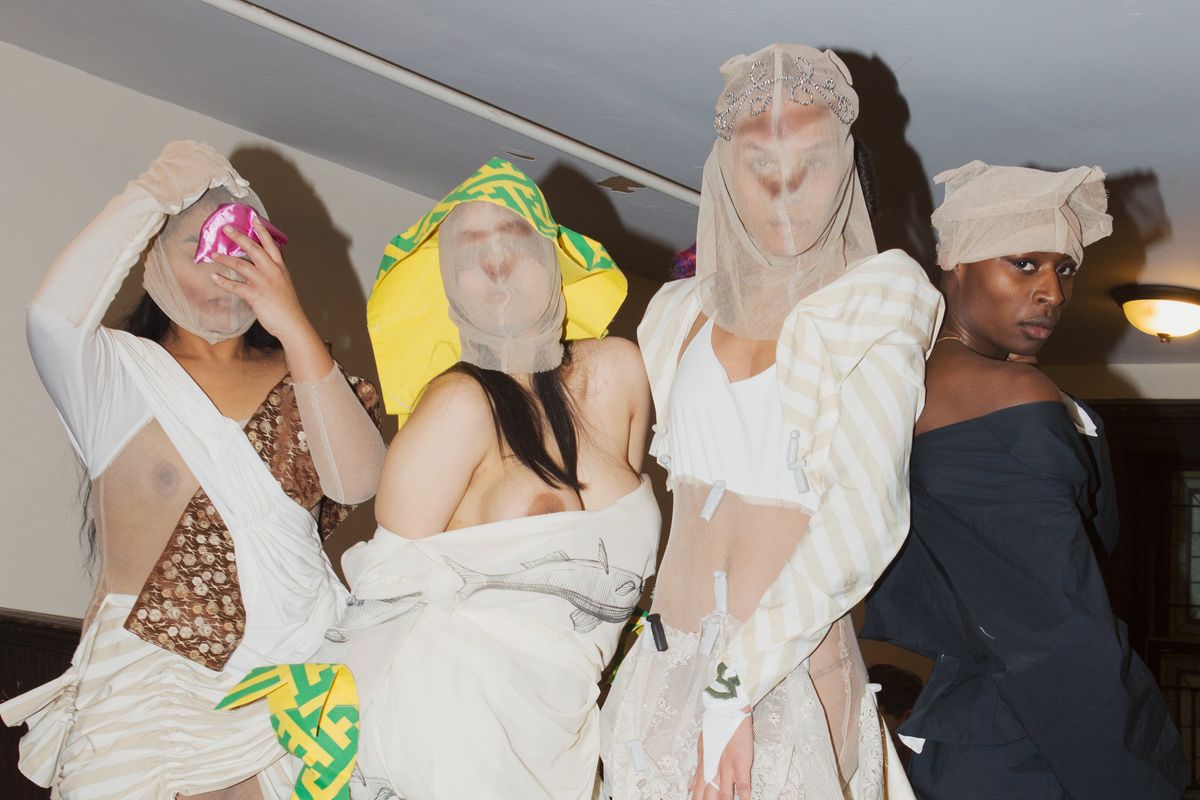 Judson Memorial Church is a beautiful, grand brick building off Washington Square Park, where avant-garde artists and LGBTQ groups planned protests and hosted performances in the '60s and '70s. It was the perfect site for New York independent designer Gogo Graham's 10th annual runway show, hosted during NYFW, which continue to be among the most disruptive events in fashion.

Related | You Should Support Independent Designers This NYFW

Graham is an insurgent in fashion in nearly every regard: Her collections are 100% upcycled, which both makes running an indie brand affordable, and marks a rejection of exploitative labor standards, and wasteful environmental practices that continue to fuel fashion, despite mounting scrutiny. Amidst New York's obscenely corporate landscape, Graham is completely independent, self-funding her show and fundraising cash to pay her models by selling original T-shirts on Depop.

This year's show was titled Tenko ( 天狐) which roughly translates to "heavenly fox" in Japanese." "When kitsune (foxes depicted in the Edo period of Japanese folklore) have lived for 1,000 years, they become Tenko," the designer says. "Up to that point, [kitsune] draw energy from humans, particularly through draining sexual energy from men. Tenko are non-physical beings, considered to be benevolent, who sometimes choose to appear in the form of beautiful human-like goddesses."

Indeed Gogo's collaged, knotted or inscrutibly draped ensembles, worn by mostly trans models of diverse body types, were celestial under the church's high baby blue ceilings and marble frieze adorned walls. The models wore dyed head coverings and flat shoes, walking at processional speed through a snaking pathway of plastic chairs, which gave the show a feel of an AA meeting for angels or Greek deities. But thanks to a mix that included clips from a documentary about female body builders in which one recites her pre-show mantra, gagaku Japanese court music, video game soundtracks, orchestral love songs, and computer generated voice-overs, the hallucinatory effect transcended any recognizable realm, human or mythic.

The most notable feature on many of the garments were fringes and flourishes of plastic security tags. The tags, which clacked as the models walked, were used to pin garments together or simply as decorative tassels, for instance, on a winter jacket. For Graham, these accents were both whimsical, and a nod to one of the many ways queer bodies are threatened. "I thought they were visually as well as aurally pleasing," Graham says. "But they're also a reference to my experiences with employees in retail spaces, assuming I'm there to steal."

While the critics bemoan NYFW's decline, shows like Graham's proved New York is radical and vibrant place for fashion if you know where to look for it.