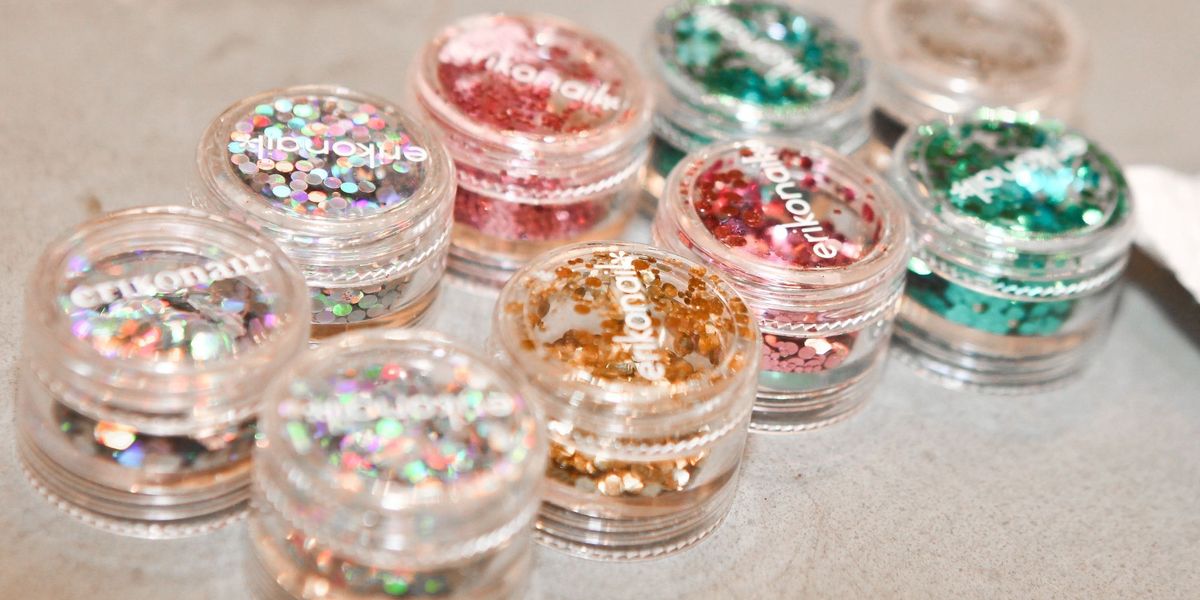 Shine On, You Crazy Teen Diamond: Reclaiming Our Youth With Glitter

This year, as grown-ass adults, we've returned to our roots. Living like it's '98 and our parents have finally let us go to the mall on the bus (see: the definition of independence), we've re-embraced the pieces that defined so much of our middle and high school experiences: glitter, face paint, blue eye shadow, and mini backpacks -- plus a resurgence of logo-wear and baseball hats, as though we're about to waltz into the Gap and pick up a hoodie. (Which, for the record, is a reasonable purchase.)

So what gives? We're adults with jobs and evolved tastes. We have perspective and old photos and painful reminders that most of us look bad in bucket hats. (But specifically me.) And yet here we are, shelling out our hard-earned dollars for trends we've already discovered, tested out, and eventually dismissed. We can't be that desperate to relive our youths.

Except that we are.

If you're reading this and remember what it was like to use tinted Bonne Bell lip gloss, Sun-In, and/or Tommy Girl sparkle gel, you're also part of the last generation that grew up without over-documentation or validity. As tweens and teens, we splurged on disposable cameras or actual film, wrote physical notes in class (that for sure were intercepted), and relentlessly fought our elders over the legitimacy of youth. In the nineties and early 2000s, to be a teen wasn't to be celebrated, it was to be condemned. We were observers, burdens, and told no more than two of us could go into a corner store at the same time. We wanted to be older. We wanted to make choices. We wanted to be like grown-ups, but cooler (because we would never wear our hair that way). Anything but being a teen. To be a teen was to feel everything but feel like nothing.

And while that feeling is a right of passage for anybody growing up (and I think necessary to growing into an actual person), today we celebrate teens in a way our own generation didn't. Thanks to social media and the internet entirely, teens have been given a platform, and have used that space to create and to speak and to build empires. We've watched PAPER-cover-star Kylie Jenner create a line of cosmetics alongside her Topshop line with sister Kendall. We've seen Zendaya speak on issues of race, body image, and sexism. We've seen Rowan Blanchard stand up for gender neutrality and queer identity. We've seen teens do things--and be rightly celebrated for doing them--that we felt powerless to do twenty years ago.

Plus, our experiences with fashion and makeup as teens were built solidly on the foundation of using them to grow up and become an adult -- which is in contrast to the approach to fashion and makeup now, particularly since we've begun appreciating and over-romanticising youth culture. Now, to look young and to act young isn't a sign of weakness or a justification for being treated less than. Now, it's a sign of creative expression, whether via Chanel's blue eye shadow, Giamba's pink hair, or Creatures of the Wind gold glitter. Hell, even Vogue sang the praises of novelty socks -- a look some of us (but especially me) deemed mortifying back in our teen years, mainly since anything fun and loud acted as proof that, once upon a time, we were children.

Creatures of the Wind

But that's the thing: While these trends are a throwback to our younger years, they're also an opportunity for us to pick up and run with something we didn't know how to interpret properly before. In the nineties, I know I was too hung up on seeming adult and serious to be creative in the way I wanted to be. I missed opportunities for creativity by pairing my platform Mary Janes with opaque tights exclusively, or by using glitter only on my nails instead of playing around with my eyes. As teens, we were earnest and analytical and just wanted to fit in. Now, we've been given a chance to re-do our approach to self-expression, all under the guise of familiarity. It's like 13 Going on 30 without Jennifer Garner's one timeline ending in betrayal and cynicism.

Instead, the fashion and beauty worlds of 2016 look far more like Romy and Michele's High School Reunion, when the two heroines march back into the venue after shedding their boring businesswoman uniforms. Liberated from the worry of embarrassment, they instead embrace their (eventual) money-making tastes and revel in the bright, synthetic pieces that make them feel happy and powerful, and confront the classmates who made them doubt themselves ten years earlier. In short, they're us right now: Free to express themselves through the clothes, hair, and makeup they were always interested in (and also, legitimizing who they were as teens).

But the thing is, like Romy and Michele, we were also legitimate as teens. Our tastes were valid, just like teens' tastes are valid now, and like teens' tastes usually have been. Teens have always set the bar for style norms in pop culture, whether in film and TV, in music, or the ones we knew in real life who always looked so goddamn cool. So it's not like youth culture being worth revisiting is a phenomenon unique to our experience, it always has been -- the actual fashion industry just clued in.