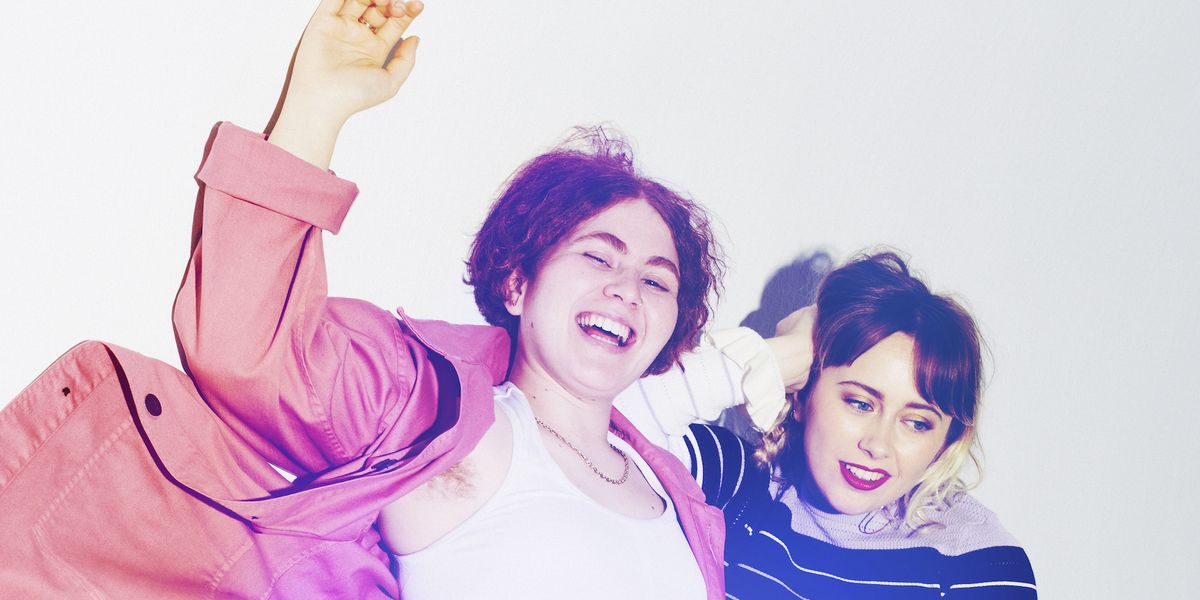 Girlpool Won't Ever Give Up Their Independence

It's not exactly easy to describe Girlpool. The LA-based duo, composed of Cleo Tucker and Harmony Tividad, makes intellectual anti-folk, featuring songs with off-kilter harmonies and soul-baring lyrics. Just don't call them a girl band. Despite their name, taken from a chapter in the Kurt Vonnegut classic Cat's Cradle, "There's so much more to focus on than us being girls," Cleo says. They (Cleo's preferred pronoun) add, "Being a woman in a band is like being a woman anywhere -- there's misogynistic sound guys and there's definitely a lot of people who under-expect things from us."

Cleo, 21 and the band's guitarist, first met the 22-year-old bassist Harmony when the two were still in high school in LA and hanging out at punk shows at underground venue The Smell. The two friends bonded over a shared love of Bright Eyes. Harmony says she and Cleo "would always talk about how much honest songwriting meant to us and how we wanted to pursue doing that more proactively, more intentionally. So we started working and exploring our songs together and it just grew from there."

They released their debut album, Before The World Was Big, in 2015 to critical acclaim, and returned in May of this year with Powerplant. With shoegaze-y riffs and Shaggs-style hooks, the record is a thoughtful take on the pain of growing up. Through tracks like "Corner Store" and "123," the duo explores everything from childhood nostalgia to unhealthy relationships, a theme brought to life in their "123" video. The clip sees Cleo oozing green liquid, a physical manifestation of the toxicity present in their relationship with a girlfriend.

But perhaps even more than love and nostalgia, at the end of the day, Girlpool is all about the connection between Cleo and Harmony. "What's funny about Girlpool is that it's literally a reflection of Harmony's and my personalities," Cleo says. "I'm just a very intense communicator, and I'm very emotionally passionate. Those feelings are completely woven into our friendship, and that's really what comes through in our music."

You got a lot of attention for Before The World Was Big. Did that have any effect on the way you approached Powerplant?

Harmony: We keep all of that really far away from our work. However acclaimed or not something is, it's important for us to keep really separate from whatever opinions people have about us. Your independent thought is everything.

What inspired the record?

Harmony: We were listening to a lot of The Cranberries and Elliott Smith. I take a lot of inspiration from the absurdity of things, and the push and pull -- the fluidity of how things are.

Cleo: I was listening to Mind Games, by John Lennon, and The Beatles, always. But I like to incorporate movement, and how an action can hold so many feelings.

I've heard Girlpool described in so many different ways -- Riot Grrrl, anti-folk, punk. How would you describe your sound?

Cleo: I like to call it indie rock, because it's really limiting to identify as any one thing.

Harmony: Also, I like to think about the fact that rock usually brings to mind Foo Fighters. So indie-rock, would be music that could potentially sound like the Foo Fighters, but independent.

I think the Riot Grrrl comparison probably just comes from the fact that you're girls. Whether or not you were singing feminist lyrics, I think you'd be called a feminist band. Does that ever feel limiting?

Cleo: Being a woman in a band is like being a woman anywhere -- there's misogynistic sound guys, and there's definitely a lot of people who under-expect things from us. But there's so much more to focus on than us being girls.

You two met at The Smell, so you obviously both come from a punk background. How does that play into what you do with Girlpool?

Harmony: We both feel very passionately about keeping a DIY and sensitively aware ethos in our band, and in our personal lives.

Cleo: We have the intention to always have complete artistic and creative control over the way we perform, and that's the foundation of Girlpool. No matter who we're working with, or where they're from, as long as we feel completely comfortable and internally encouraged to create freely -- that's our strongest ethos.

So was it the DIY aspect that attracted you to punk?

Harmony: Punk was just very liberating for me. I was feeling ostracized and like a weirdo, incapable in certain areas of my life -- feeling capable in school but incapable socially. Then I met people through music that made me feel like I had something to talk about that was worth saying, and that I could make things and create things and put things together I didn't even know I had the physical, mental and emotional autonomy to do.

Cleo: In high school, going to punk shows was the time of my life. I felt like I could just freak out -- I loved dancing and it felt like a place where I could just lose it and really be me.

How did you each get into music in the first place?

Cleo: I remember I loved playing guitar -- I really didn't even sing until I was 15 or 16. Then I thought I'd be a studio musician. I remember being at the table with my family and my aunt being like, 'What do you want to do?' and it was like, 'Cleo knows what she wants to do, she wants to be a studio musician.' But that's because I never saw myself writing songs -- I just loved playing, and I still do.

Then what was the catalyst for starting Girlpool?

Harmony: We were really close friends, and we both really loved Bright Eyes. We would just always talk about how much honest songwriting meant to us and how we wanted to pursue doing that more pro-actively, more intentionally. So we started to working and exploring our songs together, and it just grew from there.

Cleo: Our songs didn't even really sound the same as teenagers—the common ground was the way we wrote them, and the type of weight we put on the songwriting process.

Cleo: I remember when I was getting ready to be Bat Mitzvahed, and I was talking to Rabbi Zoe -- shoutout to Rabbi Zoe -- about how I just didn't identify with some of the things I had read in the Torah, and I was about to stand up in front of everyone I knew and try to explain it. She said to me, "Cleo, wrestle with the Torah," and I often feel like that's exactly what Harmony and I do together. We'll explore an idea and look at it many different ways, and talk about how it makes us feel. Then, we'll write a song.

Does your ego ever get in the way?

Harmony: What's exciting about collaborating, is the freedom and fluidity—things can be what they are and change, then go back to being what they are, or become something different—just letting the idea exist separately from whatever attachment you have to it and letting it run its course. Allowing any part of that be compromised by ego, destroys the fun and beauty of it.

There's a real level of intimacy to what you do. Not just the lyrics, but listening to your record and watching you perform—it's a very intimate experience.

Cleo: What's funny about Girlpool is that it's literally a reflection of Harmony's and my personalities—I'm just a very intense communicator, and I'm very emotionally passionate. Those feelings are completely woven into our friendship and that's really what comes through in our music.