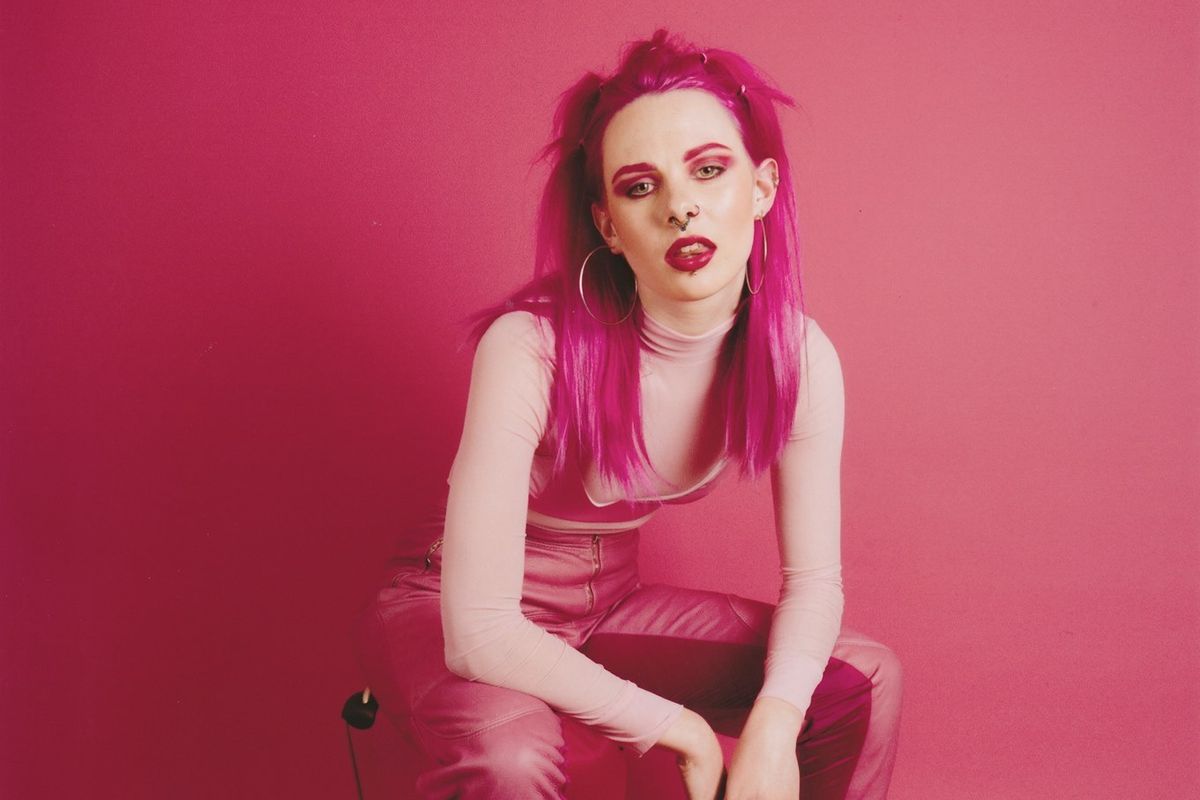 Self-confessed "samurai princess" and dyed-in-the-wool anti- Brexiter, 18-year-old GIRLI doesn't shy away from talking about politics and current affairs. As proven by songs like "Girls Get Angry Too," she's all about putting her two cents into a topical debate. Usually dressed in a full pink Adidas tracksuit and sporting long bubblegum pink locks, GIRLI gives you the full spectrum of life in Britain (or more accurately, London); her lyrics referencing everything from fried chicken to TV's most-hated, while simultaneously making observations about being a young woman. In the aftermath of the recent EU referendum, a time where some have lost considerable faith in the British public, it's refreshing to speak to a switched-on 18 year old who's determined for the West to "get its shit together". Here we talk throwing tampons in people's faces, what Americans envy, and more.


When you first decided to pursue music, what was your main motivation? Was it the performing and a love of music that spurred you on, or were you looking for a way to speak out on things you didn't agree with?

I think it was a mix. When I decided I wanted to do music I was not as switched on as I am now – it was three years ago, so I was only 15! I had this craving to make things and show them to people. Maybe it's childish, but I just loved the idea of going on stage and performing. The things that you can do with music are so broad. You don't just write a song and play it, you write a song and you have so much to say, but you also get to travel around and present it. I reckon the main motivation [at the beginning] was that I just fucking love performing. I'm a bit of an attention-seeker!

I've heard that during the live shows you do things like throw tampons at the crowd. How do you plan your shows?

I think the show is the part that I spent the most time thinking and stressing about. I spend a lot of time perfecting it because, for me, seeing my favorite bands live was what made me want to get into music. You feel ecstatic when you go along and they make it more about than just playing the songs. They make it about experiencing them and experiencing the feeling of being with loads of people who have the same kind of ideals and shit like that. I come from a performing background – my parents are actors and most of my friends are artists or musicians or performers as well – and I think I always thought I wanted my gigs to not just be a gig. I want them to be more like a show or a spectacle. I wanted people to come away being like, "Oh fuck! What the fuck was that!?". I think the most disappointing gigs I've been to are the ones where you come away and you're just like, "Well, I could have had a bigger party if I'd just put on their YouTube video and danced on my own". [When you go to a gig] you want to see something that you're not going to see anywhere else. The shows are your opportunity to show people what the songs mean to you. People will listen to them and watch your videos and interpret them how they like, but at the show you can really give them what you think about your own stuff. That's quite a rare thing to be able to do, especially with social media etc -- everyone has their own idea about everything. Also, I just love the look on people's faces when I through tampons at them! It's gold, it's gold.

Have you ever had any strong reactions that stick out in your mind?

I played a show in Sheffield and one of my best friends was my DJ. We got there and set up and it was in this bar sort-of-thing -- anyone could walk in and see the show. We started playing and there were some uni students in there who were into it, but then this whole bunch of lads on a Friday night in Sheffield walked in to get a pint and saw us and were just like, "What the fuck?!". They started heckling us. Someone wrote on a note "You're shit" and passed it to me on stage while I was playing. Then other people were like, "Get off!". I laugh about it, it's quite a fond memory, I think. When I saw the note and heard all these people shouting, I was like, "Fuck yeah, I'm doing something that makes people react. That's wicked!" I think that was the memorable one, although I feel like that's not even the most extreme to come. I feel like I'm going to get more and I'm ready for it.

You like to provoke a reaction whether it be good or bad?

Definitely. Like anyone, I'm quite sensitive and when I started writing songs three years ago I didn't write what I write now. I made quite middle-of-the-road stuff. But then I started to realize more and more that if you are getting recognized for making things, then you should make things that actually say something. There's plenty of fucking music that says nothing and I think I'd rather people actually react than do nothing. I think I've also gotten more hardened by it. I used to read YouTube comments and be all "urghhhhhh," but now I just laugh at them.

I saw a tweet you wrote that read, "Someone's song is like their diary entry, think of that before you slate it". But then, like you say, there are a lot of artists whose songs aren't like a diary entry because they don't even write their own music…

Is it frustrating? Do you feel there to be a lot of irrelevant music in the charts?

Yeah, it is. As soon as I tweeted that I thought, "Wait, that's so not true for so many songs!" I think there is a lot of bullshit music that says nothing, but at the same time, for me, I like all kinds of music. And if a song makes you feel something then it's kind of done its job. I'm not going to be like, "BOYCOTT ALL CHART MUSIC BECAUSE IT'S SHIT". It's not, there are loads of songs on the radio that are massively mainstream and have been written by teams of 20 people that definitely aren't a diary entry -- but they still make me feel something or make me want to dance. I think it just depends. I remember when I was younger just being really anti-any mainstream music, as you always are when you're a tween...but now I'm way more open to it. I'm much more of a pop fan now and I appreciate that. I like making pop music as well.

You've lived in London your whole life. Right now everyone's talking about the division between London and the rest of the UK in the wake of Brexit. Do you feel like growing up in London has affected your mindset and your music?

Completely. Especially with the EU referendum, I was reminded how separate London is to the rest of the UK. My friends and I, we all voted "Remain." [When the results came in,] so many of my friends were like, "What? I don't understand! Everyone has the 'Remain' stickers!". But it's like, well, we're in London, we're in this bubble, you forget that the rest of the UK is actually this quite right-wing, racist, conservative country that isn't as forward as we think it is. London is completely the reason why I make the music that I make. Lyrically and musically, just going out in London and hearing all kinds of music such as grime and garage and drum 'n' bass and going to raves with my friends and free club nights and meeting people and writing lyrics about them; it's all influenced me in a sonic way, a lyrical way, my mindset… I have a lot to thank London for.

You mentioned that you're a fan of grime and some of your reference images include Skepta and Novelist. It's a genre that's also been getting a lot of attention overseas finally. Do you feel you've entered the race at a good time for UK music?

I think social media has helped a lot. Grime [from people like Skepta is] in a sense is breaking into America, but there's still a lot of UK music and UK grime that is still [unknown in] the UK. I have hope though. I think Americans are really coming round to UK music because it's pretty awesome. The thing with UK music is it has a humor that American music doesn't. British people, and it especially shows in grime and in the lyrics, are able to laugh at themselves and make jokes. Perhaps the reason that that hasn't broken America before is because it's quite an inside, very British humor thing. I completely get why Skepta has broken through, potentially because he veers away from the more underground shit. I think America is coming round to UK music and more. That ability to laugh at ourselves is something Americans envy.

You're really active on social media, not just when it comes to putting your creative projects out there but also when it comes to commenting on topical subjects. You were recently tweeting about the EU referendum, as well as the tragic events in Istanbul. There are a lot of people who have a huge following who don't like to engage in political and social debate. Do you feel that they should feel obliged to comment on such important matters? Is it important that they use their reach to shed light on them?

There are some people who really want to separate their opinion from what they do because they know that it gets them into shit. If you have an opinion these days and you're on a platform and lots of people know who you are, you will get criticized for it. I think it's so important [to use your reach], especially for those massive people who have a huge influence. We need to start a debate. With regards to the EU referendum, I'm fucking amazed how people, even in London, have not reacted that extremely. Where's the revolution? People seem so desensitized to political suckers and violence and what happened in Istanbul. I was disgusted when I opened the paper and I had to go to the middle of the fucking newspaper to find that story because it didn't happen in the West. Nowadays you are obliged to use your influence to change things. The West is in self-destruct. We are really at a time where things are building into something big and people need to use their influence now or they'll regret it further down the line.

You're radio channel GIRLI Radio is so funny. You're about to launch GIRLI TV. What's to expect?

GIRLI TV is a piss-take news channel about me -- all the juicy GIRLI gossip.