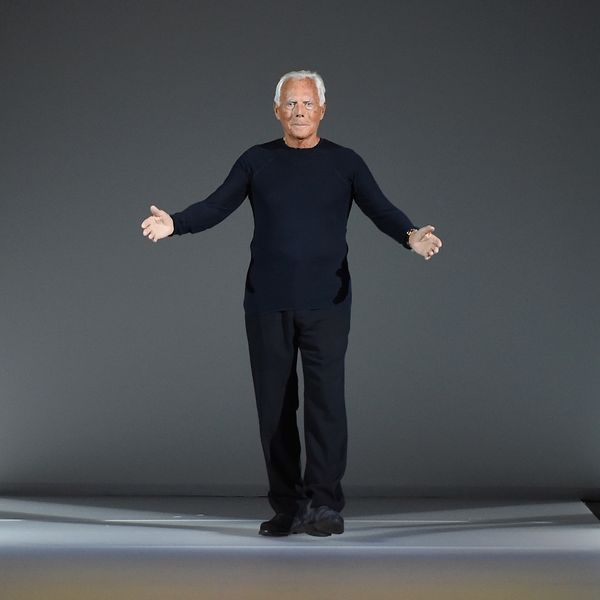 UPDATE 2/21: The brand issued the following statement by Giorgio Armani

"I can understand how today for the press, it could be a strong statement. If I could turn back and have used another word to express that all of us designers have the duty to respect the women we design clothes for I would. But I used this term, provocatively, to move things, shifting the attention to a matter that I believe is very important, and that is close to my heart."

Giorgio Armani snapped at the conclusion of his runway show for his label Emporio Armani in Milan today. According to WWD, the designer had some strong words for journalists who were backstage after his show.

"There is so much talk about women being raped, but women today are regularly 'raped' by designers," said Armani. "I am thinking of certain ads where women are shown in a provocative way, half naked, and many women feel pressured into looking like that. That for me is rape. It's unbefitting. Look around, they think that by wearing black leggings and a bomber they become modern. Excuse my outburst and the strong words, but I felt like I had to say this."

The designer, who only gives interviews in Italian, seemed to be frustrated about how journalists cover collections nowadays, which according to him is too focused on trends. "I am tired of hearing about trends. They are nothing," he said. "I want to improve the woman who lives now. There's all this musing about the past as a trend, but I don't agree with it at all."

His words were met with puzzled reactions on Twitter, with many users questioning his choice to compare provocative fashion campaigns and inappropriate clothes with the word 'rape.' (Others mentioned a possible language/culture barrier.)

His next collection will be shown on Sunday for his Giorgio Armani line.

PAPER has reached out to Giorgio Armani for further comment.