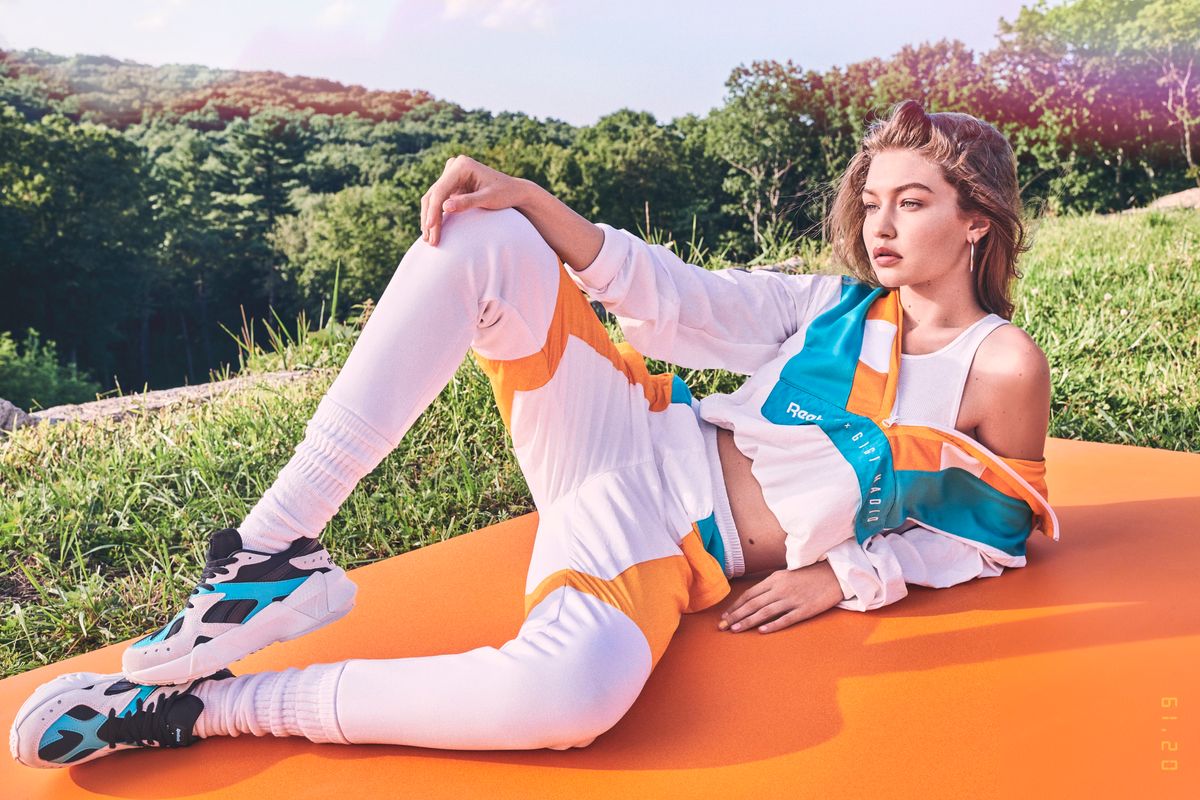 For the launch of her latest Reebok collaboration, Gigi Hadid flew her two former high school volleyball coaches from Los Angeles to New York to teach a bunch of uncoordinated fashion journalists how to play her favorite sport. At the DREAM Charter School in East Harlem, students and journalists laced up fresh pairs of Aztreks and started taking instruction from the supermodel and her two mentors, Carlos Gray and Aaron Wexler. Hadid, it turns out, can really spike a ball. Gray said it best:

"They say she's an athletic model, but we know the truth," he explained, as Hadid demonstrated an effortless serve. "She's an athlete who just happens to look good."

Getting owned on the court by Gigi Hadid, fresh and flawless looking in a skintight bodysuit of her own design, is a hardcore way to spend a Monday morning. But at least the shoes were comfortable. While Hadid is more known for her fashion cred than sporting talents, she said she designed the new collection with mostly the latter in mind.

"Reebok mostly see me as an athlete, and that's what I really appreciate," she explained. "When I began the design process, I closed my eyes and pictured myself walking into my high school gym. I was thinking about the player."

The result? Chunky sneakers meant for traversing terrain other than the runway: "A lot of people are buying thousand dollar dad shoes where you can't actually go to the gym in them. So I'm making the dad shoe that will actually support your foot. You can go anywhere in it."

Hadid and the Reebok design team merged that athlete's sensibility with plenty of 90s nostalgia — the model's streetwear calling card, immortalized in a million paparazzi photos. She says she was inspired by raiding her dad's retro sportswear-filled closet as a child — he was an Olympic skier in 1992, so there were plenty of bright neon colors to revel in.

"I remember Reebok as a kid, very classic, I really loved those shapes and wanted to bring them back for my generation," she said. "Re-cut them and re-color them, but stay very true to the heritage."

Hadid spent hours in the Reebok archive in Boston, going through old designs and picking out her favorite accents. "I was like, okay, can we have everything here be my closet? I could have picked 150 shoes that I would have re-colored and put out," she said. "It was about celebrating the 90s and what we loved from Reebok and what a lot of people go to a vintage store in Tokyo and look for hours to find."

She was particularly inspired by Reebok's classic 90s flag graphics, prominent on t-shirts back in the day. She recreated them in neon, and included a nod to her family heritage: look out for stylized versions of the American, Dutch, and Palestinian flags emblazoned in neon.

Hadid's favorite piece from the collection is a bright white tracksuit hoodie in retro parachute material that definitely wouldn't look out of place on a 90s ski slope. Except look twice — she lined it with moisture-wicking fabric, because comfort on the court is just as important as 90s nostalgia: "It's something that made sense for my fashion side and my athlete side."

Gigi Hadid x Reebok is on sale now. More pieces from the latest drop, below.