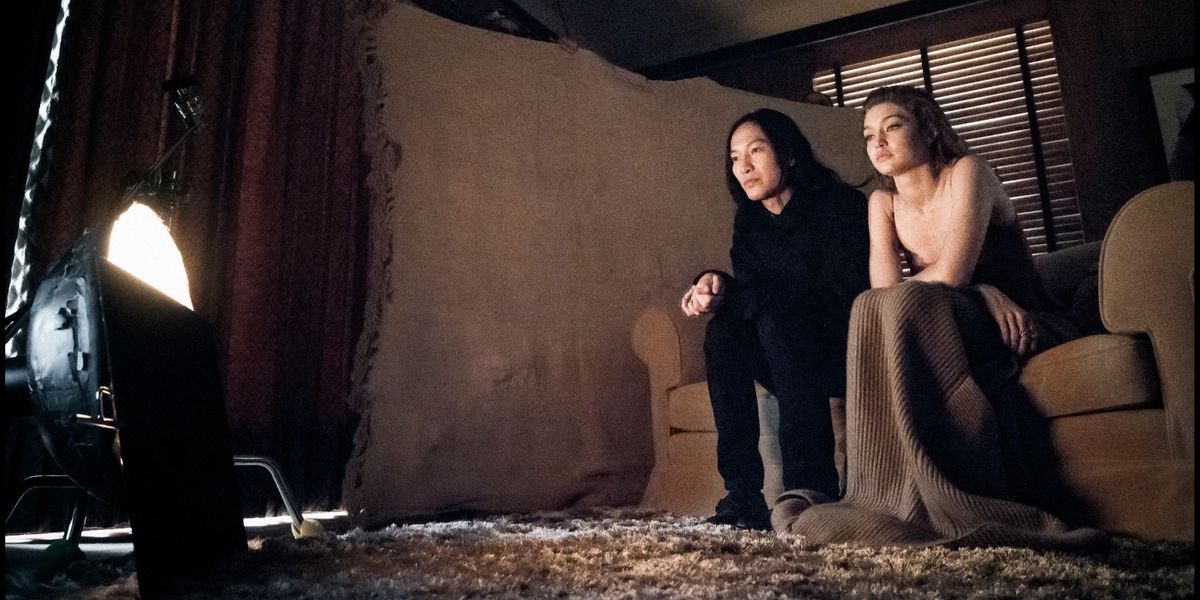 Gigi Hadid and Alexander Wang on Their Pirelli Calendar Shoot

Unreleased to the public, Fashion's sexiest calendar, the Pirelli Calendar, or for those in the know, "The Cal," has been an exclusive collector's item since 1964. Calendars of yore typically featured scantily clad supermodels artistically shot by A-list photographers. In the last few years, though, the calendar has been making moves toward becoming less high class nudie mag and more cultural touchstone. Last year, an all black cast featuring P. Diddy, Whoopi Goldberg and Naomi Campbell reenacted a high fashion Alice in Wonderland.

The calendar's 46th edition, shot by famed fashion and celebrity photographer Albert Watson, featured a trio of couples across the entertainment and arts industries acting out scenes of varying stories, from Misty Copeland and Calvin Royal III a a dance-themed love story, Laetitia Casta and Sergei Polunin shot as downtown lovers, Julia Garner and Astrid Eika as flower-loving photographers and Gigi Hadid as a troubled socialite languishing in her hotel room with her confidant, Alexander Wang.

This year marked the first time a fashion designer modeled for the calendar. At an interview following the shoot at the penthouse of Manhattan's swank Carlyle Hotel, Hadid and Wang spoke about their experience working together in front of the lens for the first time.

On relating to her wealthy socialite character:

"My character is an aristocrat type that is going through something in her life, and to get away, she rents the penthouse for five months and just stays. I can relate to that in a way because I'm always traveling alone. Sometimes I find that after being around hundreds of people in a setting that's very glamorous that at the end of the night, I'm in a hotel room by myself, in a country where I don't know anyone, and there is no one awake at home to talk to.

I find myself in the same situation as this character where it's lonely and sad, but I think there is a beauty in that, in terms of getting to know yourself and learning how to find strength. There is a beauty in being alone and trying to learn how to fulfill yourself.

Over the last few years, I really learned that, for me being fulfilled is going to the farm and shutting off and not worrying about hair and makeup. It gets really overwhelming for me, and then I'm not able to be present at work. I relate to this character because she's okay with feeling sad and knowing how to grow from that."

On understanding her privilege:

"I didn't really realize this until it was put into words for me this year, but I've always had guilt about my privilege. When I came into modeling I worked so hard to prove myself. It even started for me in high school, everything that I did, I wanted to be great at. I didn't want to not only to be defined by my parents' success or by being pretty. I made it so important to myself — I was a great volleyball player, had good grades, and went to university for something interesting and kind of unexpected for my job. Those were the things that were important to me, because that's how I value myself. I think that it's funny that this character was chosen for me, because I really relate to it. It's kind of emotional, but it's cool."

"I find myself in the same situation as this character where it's lonely and sad, but I think there is a beauty in that, in terms of getting to know yourself and learning how to find strength." — Gigi Hadid

On shooting with Alexander Wang and her friends:

"Alex works with my sister a lot and is friends with a lot of my friends so we're buddies. We can have a good laugh. Today, it's very calm and reflective and there is a sad tone to everything. I love Alex and I'm excited that we get to work together.

[In the shoot] he plays my friend who is there in the dark times, and I am so blessed to have those friends. I have an interesting balance within my separate friend groups — there's my three or four lifelong friends, who I really love because in a dark time they are the ones who remind me of who I am and that I'm good enough. It's tough to hear like, 'She doesn't deserve it because of this and that,' and you don't necessarily believe it fully, but you have it in the back of your head.

Then I have my friends who are in the industry and understand what I'm going through — someone like Blake Lively, who inspires me so much. She is such a star, but she is kind, real and has figured out how to live a normal life with a great husband. She has such a normal feeling to her, yet she's such a star. I am really lucky to have friends like that so they can help teach me the ropes and the ways that you can go about life so you can have both things. My friends are a balance between those two things and they're really important."

On acting and designing her own collection:

"I'm definitely interested in designing. I love being creative — even more than campaigns, events and all the fancy stuff for my collections. I love the days where I can just sit at a table where I can draw, cut and do all that stuff.

With acting, I would love to act, I just get the roles that would be an obvious fit for me to play every week. The model, the girlfriend, the whatever. When I do get opportunities to audition for roles that I am really interested in, then I'll go for it. But I want to be smart and play characters that I am really interested in. I'd rather do one or two great movies in my life rather than doing a bunch of random cameos when I can just be at the farm."

On shooting the calendar:

"I think that it's a breakthrough moment for me to be a part of it, and it's a complete honor. It was beyond just a fashion picture and there is a lot more of a narrative embedded into each scene and character. Albert's the OG, so for me to work with him on this and also on the other side, under his leadership, has really been exciting."

On whether the experience made him want to act:

"Definitely not. I've had a couple of opportunities to be on the other side of the camera, but it's always pretty surreal for me. I always end up playing myself but sometimes end up playing a slightly different version or character. I definitely wouldn't say it was what I was born to do or what got me here. But it was exciting to try different things or be apart of experiences, especially in today's time where there are so many different mediums and people are able to try different things and experience a different facet of themselves. For me to be able to express myself, creatively, whether I am leading the conversation or if I am apart of another one is always very interesting and inspiring."

"Albert's the OG, so for me to work with him on this and also on the other side, under his leadership, has really been exciting." — Alexander Wang

On working with Gigi:

"She made it a lot easier and has a great sense of humor. One scene, we were watching a prop TV, and obviously she has done it a lot more than I have and was able to ask more questions to help get herself into character. She was like, 'Oh, what are we watching? RuPaul's Drag Race.' It was definitely a lot easier to have someone leading the way."

On working with Gigi and Bella:

"This is the first time I've worked with Gigi on a project where we are working directly with one another. Obviously, they're sisters, so even in her voice when she's saying things, I have to remind myself that it's Gigi. I'd probably say that Gigi is a little bit quieter when she thinks about the shot, and one thing I will say is that they both were talking about how they can sleep anytime in between shots. It's really interesting that they both do that, because every time I'm always like, 'Ok, 15 minute break,' Bella is like passed out somewhere, and I'm like how can you do that?"