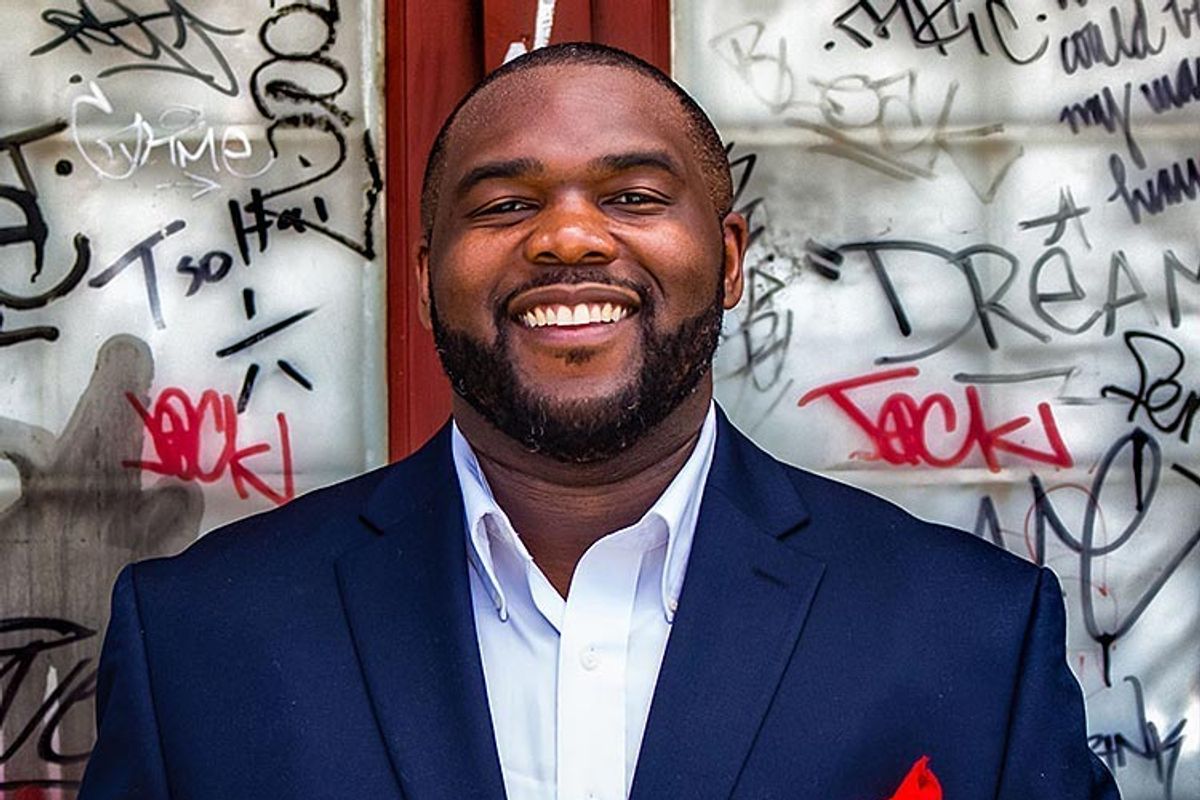 Since 2014, Atlanta's Counter Narrative Project has been working to raise awareness about the lives of and give voice to the city's community of black gay men through public education, advocacy, and community mobilization. Johnnie Kornegay has been with the Counter Narrative Project since 2015. As Network Director, he is responsible for programming activities, community outreach and mobilization efforts. (He also hosts CNP's podcast, Counter Point, speaking with guests from intellectuals to artists to CNP's founder.) PAPER and American Express joined together to talk with Kornegay about what initiatives the Counter Narrative Project is working on, the issues still facing Atlanta's LGBTQ community, and what are some of his favorite places—from bookstores to House parties—in the city.

How did you come to the Counter Narrative Project?

I had the opportunity to participate in a meeting the Counter Narrative Project hosted in 2014, concerning the impact of HIV on black gay men in Atlanta. You see, according to a recent study by researchers at the CDC, if current HIV diagnoses rates remain the same, about 1 in 2 black gay and bisexual men will be diagnosed with HIV in their lifetime. In the South, and particularly in Atlanta, black gay men are disproportionately impacted by HIV. This is an issue that does not receive nearly the attention it should get. And the Counter Narrative Project hosted a community strategy meeting. I remember being really moved by witnessing so many people being committed to building stronger and more progressive bonds in the community.

What projects or initiatives the Counter Narrative Project is working on right now and in the near future? What's on the horizon for the organization right now?

We have three initiatives we are working on currently:

1. "We Are Here" is our program focused on raising the visibility of black gay men in the South.

2. "I Will Be Heard" is our national mobilization campaign to respond to the socioeconomic drivers of HIV in the lives of black gay men.

3. "Counter Culture" seeks to use the arts and culture to inspire critical dialogue and action.

On the horizon right now is our commemoration of the 30th anniversary of the publication of In The Life: A Black Gay Anthology edited by Joseph Beam. On November 2, 2016, we'll be hosting a series of events internationally ­to commemorate the release of this historic text.

How can people get involved and support you? What's the best way to do so—donations, or volunteering, or something else?

What do you think have been some recent really positive developments lately in Atlanta's LGBTQ community? What are the bright lights, as it were?

There are a number of exciting efforts around Atlanta. It's really difficult to narrow the list down, but just to name a few:

1. The Equality Foundation of Georgia convenes a Youth HIV Policy Advisors group which has done some amazing work in amplifying the voices of youth living with HIV to policymakers.

3. SPARK also recently hosted the FYRE Media Justice Camps for queer and trans youth of color that engages them around media, and helps them develop and create their own media.

4. The LGBT Institute in the Center for Civil and Human Rights has also been such a major convening force for our community.

What do you think is the next big step, both for Atlanta's LGBTQ community, and LGBTQ rights in general? Essentially, what's the next project/movement/issue we should all be looking to tackle and change?

Our hope is that the Atlanta LGBTQ community and the LGBTQ rights movement in particular exercise more courage in grappling with race and racial justice. Anti­black racism has been far too rampant in our movement, exemplary of the history of black people not being allowed in some gay clubs, and being asked for multiple forms of identification. Black LGBTQ people are still far too often marginalized in the larger LGBTQ movement. There must be more resources allocated for the building and sustaining of movement leadership among black LGBTQ leaders, more resources allocated to black LGBTQ health, and a greater commitment to building black LGBTQ spaces. There isn't even a national black LGBTQ conference for example.

Additionally, criminalization must be a priority for our movement. The LGBTQ community must work in solidarity with the larger movement for racial justice and the movement to fight mass incarceration. There absolutely must be resources available for us to respond to the violence and murder committed against black LGBTQ people, the rates of HIV among black LGBTQ people continues to be of critical importance, and we must have a war on poverty to tackle the impact of economic distress, food insecurity and housing instability in our community.

What are two or three of your favorite places/organizations/activities/role models in the ATL community?

Charis Books & More: Charis is an incredible feminist bookstore and is a warm, inviting place that supports the work of our progressive movements in the city.

House In The Park: The annual outdoor House music party that happens every Labor day weekend ends the Summer by providing one of the most loving and energetic spaces to the beat of House music. Community work can be challenging, and this event is like church.

Center for Civil and Human Rights: The Center has become such an important part of the progressive movement in Atlanta by allowing us to host events. The Center also houses the LGBT Institute, and they've been doing wonderful work supporting local organizations.