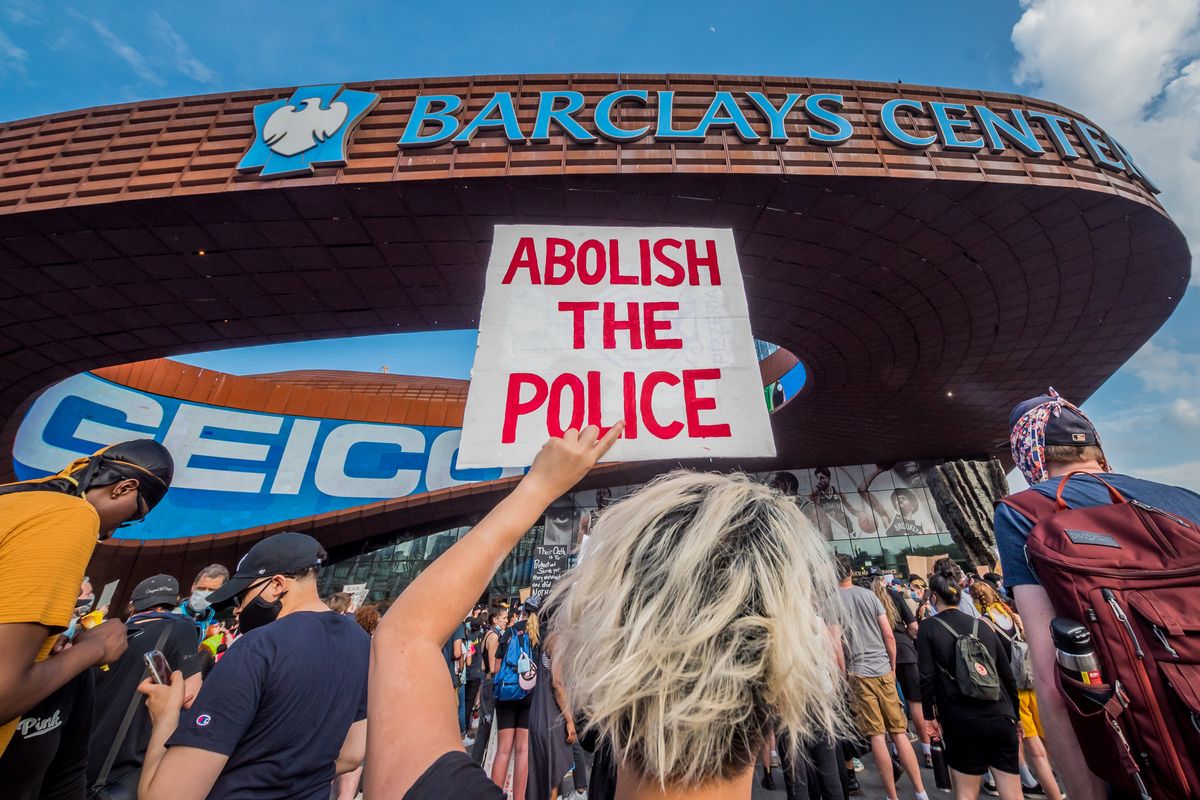 Friday night, protesters marched in cities across America — from LA to Denver — demanding justice for George Floyd and calling attention to systemic racism. The protests, as organizers warned may happen, turned violent in many instances resulting in hundreds of arrests and several injuries.

In New York, two large protests started in downtown Manhattan's Foley Square and Brooklyn's Barclays Center at 4 PM and 6 PM respectively. In Brooklyn, just after 7 PM, things began to escalate as police attempted to disperse the crowd. Several protesters were maced, including Assemblywoman Diana Richardson, who says she was protesting peacefully. Many were arrested or detained in an MTA bus.

Protesters then marched to Fort Greene Park and police precincts in Brooklyn. Footage of a police van on fire circulated widely on Twitter where "Fort Greene" trended.

In Atlanta, protesters demonstrated outside the CNN building which was left graffitied and with many broken windows. During an evening address, Mayor Keisha Lance Bottoms called the protests "chaos" through tears. In Washington, DC, protesters marched to the US Capital, and clashed with the Secret Service at the White House while many held signs calling out President Trump's racist tweets.

The protesters in Minneapolis, where George Fyold was killed, defied an 8 PM curfew to turn out in record numbers. In an 1:30 AM press conference Minnesota Governor Tim Walz said, "This is the largest civilian deployment in Minnesota history that we have out there today."

TV anchors covering the protests explained to viewers that the sounds they were hearing in the background were most often fireworks being thrown, not guns. But that wasn't universally true. On Thursday night in Louisville, seven demonstrators were shot as they protested the death of Breonna Taylor. Friday night in Detroit, a 19-year-old man was killed after a suspect fired shots into a crowd. While police have not confirmed if the victim was participating in the protests, the shooting occurred near where they were taking place. In Oakland, where at least 7,500 protesters took to the street, two federal officers were shot and one later succumbed to his injuries.

In nearly every city, protesters described how police responded to peaceful demonstrations with force. In New York, there were at least 200 protest-related arrests from Friday night into early Saturday. In Fort Wayne, it was widely shared that tear gas was used by police without warning, including on children.

Just left Barclays. I sent pictures to friends and some said, “I can’t believe no one is social distancing.” The duality of that response is being concerned for the health of protestors and a subtle failure to recognize that systematic racism is deadlier than a pandemic.

Just after 1 AM in Brooklyn, I walked down Flatbush Avenue near Barclays. There were few people left on the streets. Near the Downtown Brooklyn Apple Store, approximately 15 police vehicles were parked. Police congregated in small groups on the sidewalk, surgical masks mostly rested around their necks, their faces illuminated by sirens still flashing. A man on a bike zipped by, raising his fist and yelling, "Black lives matter," as he passed. The cops looked on silently.

Another night in America.

How You Can Demand Justice for George Floyd