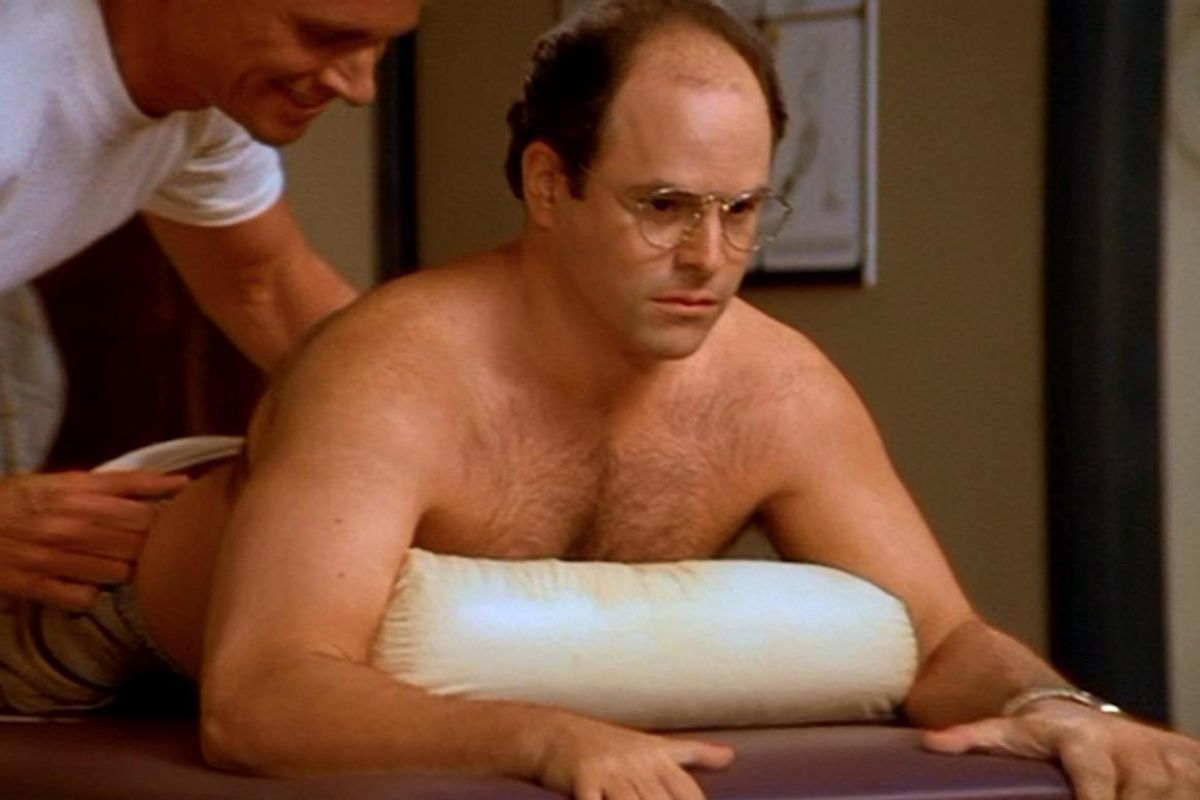 George Costanza liked men. But he wasn't gay -- not that there's anything wrong with that.

Amidst George's self-loathing and romantic hangups, many of the shows jokes were made at the expense of his sexuality. His true feelings on the subject were never really addressed in detail, probably because his uncertainties and questionable tendencies reflected something not so black and white. Through the lens of our current understanding of, and conversations about, sexual fluidity, it's possible to examine George as a potentially queer character who embodied something more fluid on a grayer part of the spectrum.

Throughout the series, George was at odds with his girlfriends, his family, and, usually himself. However, there remained an underlying frustration that came bubbling up to the surface whenever George's sexuality came into question.

Even though the world has been informed of sexual fluidity for decades thanks to the Kinsey Scale and the Sell Assessment, Seinfeld's '90s-era tenure coincided with a time when the AIDS crisis and Clinton-era policies like "Don't Ask Don't Tell" and "Defense of Marriage Act" kept many in the closet and discussions of complex human sexuality were rarely seen on mainstream media.

It was a big deal in Hollywood for films or shows to give LGBTQ characters exposure and reception was often polarizing. People freaked out when thirtysomething showed two guys having post-coitus pillow talk, and let's not forget the firestorm that erupted when Ellen DeGeneres came out on her sitcom. Shows like Friends, Roseanne, and Melrose Place gave gays and lesbians positive visibility as B-characters in the '90s, but the portrayal of anything more nuanced was rare. Despite Sex and the City's reputation for pushing the envelope in the late '90s, a season three episode saw Carrie skeptically dating a bisexual man and deeming his sexual identity "layover on the way to Gaytown." On network television at that time, characters were either gay or straight. Nobody in-between really saw the light of the day. It makes sense that a show that prided itself on "no hugging, no learning" was not the one to educate us all on sexual fluidity. And so, George's sexuality remained, at best, open to interpretation.

Season four featured the classic episode "The Outing", where George and Jerry are mistaken for a gay couple by a young female reporter. The two famously insist that they are not homosexual, but convince no one. George eventually uses the misunderstanding to his advantage and tells the woman he is desperate to break up with that every word is true. In the DVD commentary of this episode, Jerry Seinfeld even remarks that George was always a little unsure of his sexuality throughout the course of the series.

In the season three episode "The Note", George panics when he learns he will be receiving a massage from a man. When Elaine asks what the big deal is, George replies "What if it felt good?" Things get even more complicated for George when he proclaims that he thinks "it moved" during the massage.

A season five episode entitled "The Stall" shows George enamored with Elaine's latest boyfriend, Tony. "I think George has a non-sexual crush on him," Jerry says at one point. Kramer even accuses George of being in love with Tony and his insecure reaction speaks volumes.

There is also, of course, Susan. George's longterm disenchantment with his fiancée was evident in his repeated efforts to end their engagement, which only came to be in the first place because of a pact he made with Jerry.

And what about Jerry? Best friends since childhood, the duo's relationship thrived on a banter-driven codependency. When George and Jerry make the promise to take dating more seriously, George is enraged when Jerry backs out on the deal. Costanza finds himself unhappily engaged to Susan while his best pal continues enjoying the single life. In the final season, George dates a woman bearing an uncanny resemblance to Jerry and even though George claims not to see it, Kramer has no problem identifying it as a sign of George's love for his best friend. Having Jerry off the market could have made George's unrequited affections easier to sweep under the rug, and his own engagement may have allowed him the opportunity not to address the confusion he felt inside.

Despite some lines of thinking, engaging in homosexual sex does not necessarily make a person gay or even queer for that matter. A recent book by Jane Ward, Not Gay: Sex Between Straight White Men, investigates the psyche of guys like George. Such behavior is not unusual in the slightest, and Ward believes that the tendency for some heterosexual white men to seek out other heterosexual men for sex is something that does not shatter one's identity.

According to the author's website, "Ward argues, [straight white men who have sex with other straight white men] reveal the fluidity and complexity that characterizes all human sexual desire. In the end, Ward's analysis offers a new way to think about heterosexuality -- not as the opposite or absence of homosexuality, but as its own unique mode of engaging in homosexual sex, a mode characterized by pretense, dis-identification and racial and heterosexual privilege."

In a world more distanced from the trauma and stigmas of the AIDS crisis and better informed on the intricacies of human sexuality, we have the privilege of examining characters as more complex than they were originally given credit for. The unlabeled sexuality Ilana celebrates on Broad City demonstrates how far we have come in terms of acceptance and also the safe space comedy creates for this sort of conversation. If Seinfeld were still on today (and it's obvious many of us wish it was), perhaps we could have seen the full exploration of George's sexuality because there is really is nothing wrong with that.