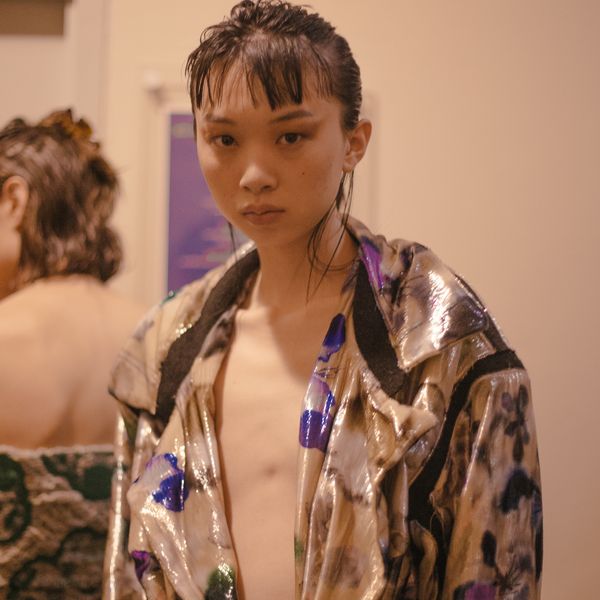 Teddy bear prints abounded in Gauntlett Cheng's fall 2019 collection. They were so cute! Or where they? On closer inspection, the teddy bears were monstrous–deformed teddies, with extra legs and heads, soft toys that would be at home in HP Lovecraft's nursery.

The bears were rendered on a sheer white fabric, made into a t-shirt and turtlenecks and dresses. They were also shown on more substantial knits. From a distance they could look like mold, or sea anemones. They factored strongly in the final look, a version of an ankle-length strapless bandage dress (shown on a model with an arm tattoo that sort of matched the teddy pattern) that designers Esther Gauntlett and Jenny Cheng tackle every season. "It was kind of reminiscent of a childhood blankie," Cheng told me. "It's this super comforting thing that could also be very sexy, which is kind of perverse."

That's a good thesis statement for the whole collection, or Gauntlett Cheng in general. They specialize in the textured and touchable, clothing that feels protective while still gleefully displaying the body with, as Cheng said, "sexy energy:" sweaters with sheer panels, slinky and backless ribbed dresses. It's all slouchy. They like their models to seem like they're getting ready for a party, playing dress-up and tripping over someone else's clothes. The casting is always naturally, generously inclusive.

Gauntlett and Cheng start designing each season by selecting fabrics that give them an "emotional response." The textiles were very beautiful; I especially loved a glimmering floral tinsel, used for a cropped puffer and glamorous robe coat and cut in strips on various knits. But while the outerwear was just so nice, this is their last fall show (it was titled "Bye Bye"). It makes sense. Gauntlett Cheng is a tiny company, and New York doesn't offer much in the way of institutional support for young fashion designers. They're adjusting to a more sustainable, seasonless model, with a big show every September. It's something from which larger brands, who offer up to six collections a year, could learn a thing or two.

"We really wanted to make decisions that preserve the brand, preserve our mental health," said Gauntlett. "And if you think about the world in general, we really don't need to be put more clothes out there." And with global warming and everything fall doesn't really exist anymore, anyway. But both designers were still a little sad to say goodbye. "Fall is nostalgia, it's comfort, embracing the familiar," said Cheng.

"We really want this brand to exist forever. We're so dedicated to it. We want to keep loving what we're doing."

Dido's "White Flag" played during the show's finale. It made even the most dour Dimes Square denizens smile — my friend Steph and I sang along and danced in our seats and looked proudly stupid. "I'm in love," sang Dido. "And always will be."

"We really want this brand to exist forever," said Gauntlett. "We're so dedicated to it. We want to keep loving what we're doing."