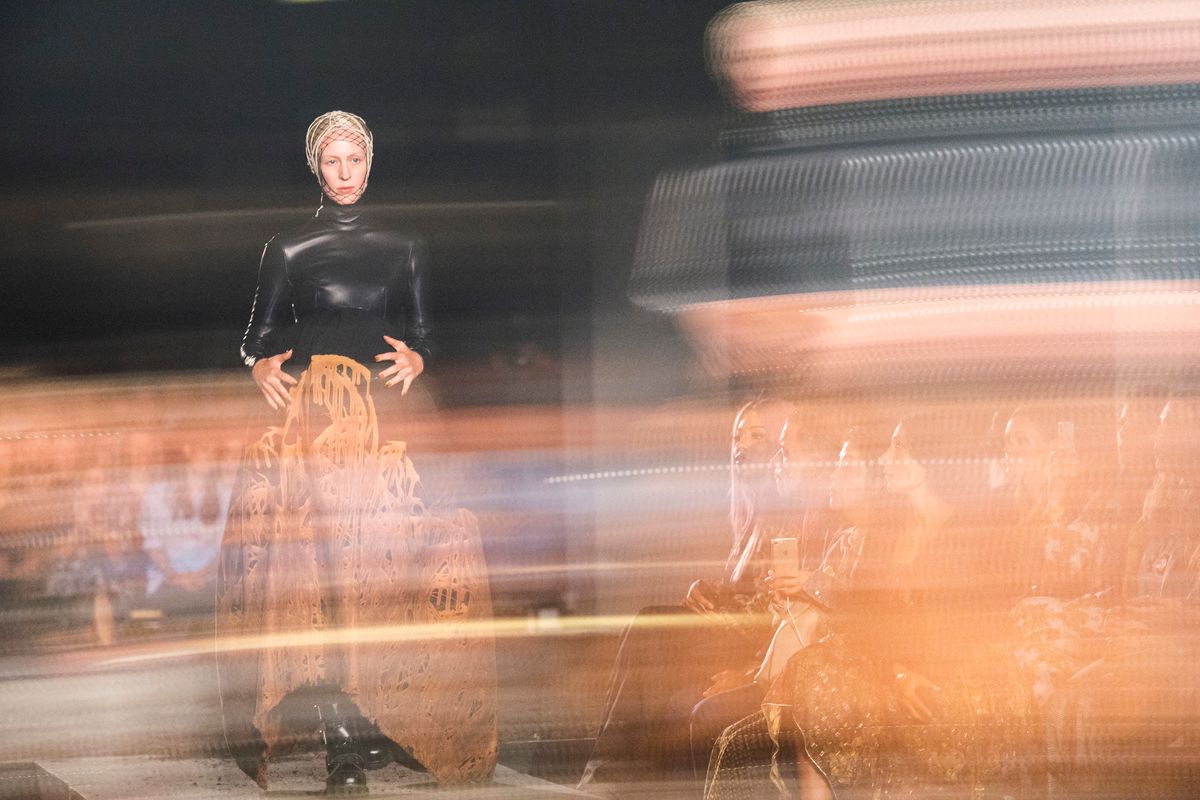 Circles of packed dirt caked the runway for Gareth Pugh's ominously apocalyptic spring 2019 show. It was fitting for a show that billed itself as a celebration of "outsider society" in a city that Pugh described as a "cradle of creative extremism." The cast of characters he sent down the runway were a celebration of fashion's cultural force.

The first model out of the shadows and onto the dirt was a fitting introduction to Pugh's narrative. A faceless figure in zig-zagging stripes with a vogue-worthy fan in hand, they were an electrifying disruption of what we've come to expect from the catwalk. What followed was a motley crew in acid-latticed and flame-printed trenches, leathery latex turtlenecks, and ball-gagged face masks. Electric shocks of hair flying haphazardly out from heads on some models while, on others, vintage marcel waves lent an old school touch to the show's anarchic punk overtones.

When Pugh warned that his collection was, at moments, "literally pregnant with possibility," we should've seen a baby bump coming. Yet, as the final model appeared in an acid washed dress and clutched an overwhelming baby bump, we still had to catch our breath. With Rihanna closing out her New York Fashion Week show with model Slick Woods literally going into labor, pregnancy is clearly having a moment this season.

When legendary punk designer Judy Blame died earlier this year, Gareth Pugh set to work on honoring one of his most treasured mentors and collaborators. While the punk artist shows up in small touches of the spring 2019 collection, it's a Vogueing ball post-show judged by Kim Jones and Munroe Bergdorf that provides the most overt memorial to Blame's legacy.

Thigh-high combat boots were the go-to footwear for Pugh's hell-raising models. While the size of the platform varied — with some creepers shooting up six inches — they presented a unifying message that this outsider society he had gathered was here to stomp the runway and kick some ass.