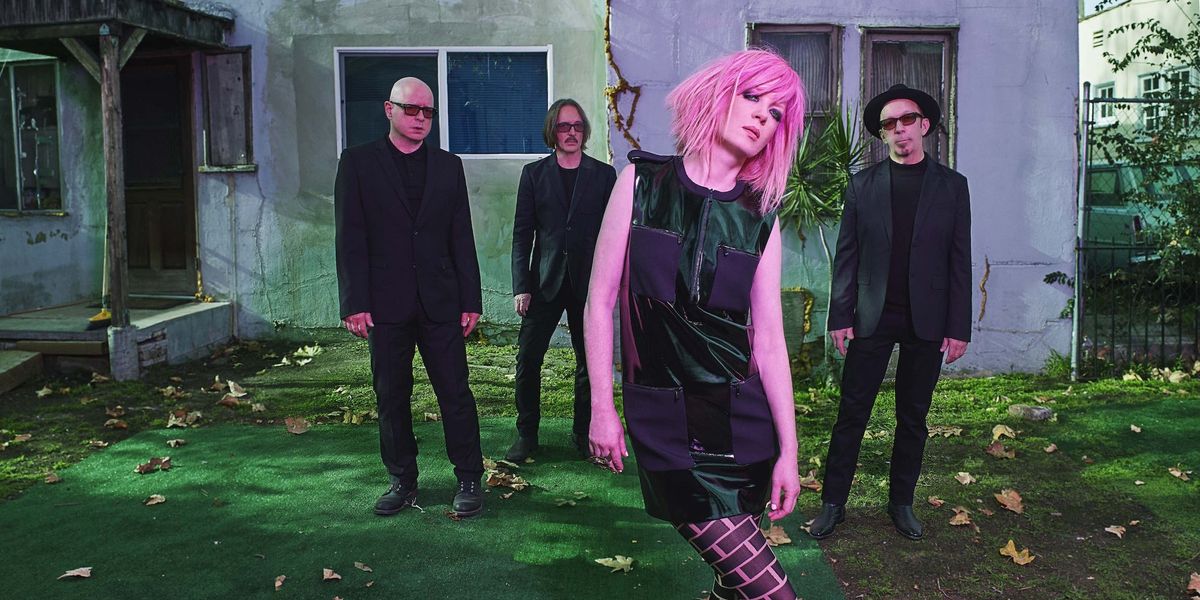 Twenty one years since their self-titled debut album introduced the world to their brand of seething, industrial pop, Garbage continues to discover uncharted territory. With their recently-released sixth studio album, Strange Little Birds, the band wanted to make a record that captured a different, more personal side of themselves, so they decided to base it around the idea of romance. While that theme might, on face, seem to imply something light and airy, that's not exactly how the record panned out. Lead singer Shirley Manson, along with bandmates Butch Vig, Duke Erikson and Steve Marker, couldn't ignore the darkness, depression and self-doubt that can come along with any romance (not exactly surprising for a band that had a hit single "Only Happy When It Rains.") Manson filled us in on how Garbage put their own spin on romance, the effect of talking publicly about her sexual assault, and why she'll never stop fighting for equality in the music industry.

You said last year that Strange Little Birds was going to be a romantic record. Now that it's complete, do you feel like it lives up to that?

I do still feel that way. I think primarily the reason I said that is because I feel like the record is touching on a lot of things that I don't automatically reveal every day. The [subject matter] tends to be [about] parts of myself that I keep to those moments when I'm with people I love, when I think you're at your most open, honest, vulnerable, ugly and beautiful. I was touching on a lot of hot spots in my life on this record and that's why I feel like it's a romantic record.

When is the last time you feel like Garbage wrote a romantic record?

Well, I'm not entirely sure that we ever have before. I think that's why I feel that Strange Little Birds is a new landscape for us. We have certainly written the odd song that is equally as romantic as this entire record, but the new album is definitely held together by a romantic preoccupation.

Garbage has broken up over the years, do you feel like you guys are finally, really together again?

I don't feel like we ever weren't together. People outside of the band made a lot more about our break than we did. It was a natural trajectory for a band that had been touring solidly for a decade, and we just needed time to live normal lives. The break ended up being longer than we ever intended it to because our lives took over. Butch had a baby. My mother died. I acted in [Terminator: The Sarah Connor Chronicles] for a year and things started happening. Of course the band is together and always has been -- we don't feel like we ever weren't moving as one.

What do you think has helped Garbage have such a long-lasting career all of these years?

I have absolutely no idea other than we have an incredible work ethic -- all of us in the band. We all have a defiant streak in us -- we don't take a lashing sitting down. We tend to get up on our feet. We carry on even when things are difficult. I think you'll find that in any career that's lasted, that tenacity. Other than that, I feel really privileged and happy that of all of the millions of bands in the world, we've survived. To me, it seems like a complete miracle.

If you had to put Strange Little Birds in the same category as any of your other records, do you think it's comparable to any of the work you've ever put out?

Yes and no. I think the songs are so completely different and we have stumbled upon some new territory for us, which is pretty remarkable for being in a band for 21 years. Whenever you stumble upon a new world after so much time, it's amazing and unusual. But, I do think the record [resembles the] records that people identify us with, the sound of the first two records, in particular. I think the reason for that is that we made a very dark-sounding record. Our first records were similarly dark. Culturally, we've gotten further and further away from serious themes and darker strategies of trying to understand the world. We in Garbage ached for an exploration of the shadows, and that's what we did with this record. We didn't want to make any concessions to be an obsession with bright light and happiness -- we feel like we're living in serious times and that requires an examination of the monsters and undertows.

When making your latest record, did you feel like you were treated positively and respectfully by the music industry?

I demand to be treated as an equal in my band, and I am treated as an equal entity in that environment, but I still struggle to be treated as an equal inside the patriarchal system which is the music industry. I'm set for the task -- I can fight my own battles. I'm not looking for anyone else to do it for me. If I come face to face with a man who I believe is treating me disrespectfully or underestimating me, I'll deal with him as I see fit. I'm not intimidated by it. The way you are treated is not indicative of your value as a human being. At no point do I find their attempt to diminish me diminishing in any way. Unfortunately, when me and my band come up against a wall, my three counterparts who are male can get over that wall with a little more elegance and grace because I have to fight harder than they do. I don't believe it'll be that way forever. Women just need to keep stepping up and expecting to be treated with equality. Sooner or later, I think we'll get there, but it does take effort and you putting yourself, as a woman, on the line when it's much easier to rage privately. Sometimes you have to look ugly and graceless and make a bit of a scene. I've definitely had to make a few scenes over the years, but at the end of the day I feel so much better about speaking up instead of going back to my room and seething in private.

Was there any recent experience where you had to throw up your fists, so to speak?

Being excluded from a business meeting about a song I wrote…let's start there. I could go on forever, and I don't think that achieves anything. Listing all the moments where you were slighted are dangerous. It causes despair and hopelessness, and I don't believe it's a hopeless situation. I think 99.9 percent of all men are happy to be feminists if they even knew what the word "feminist" meant. Then there's the 1 percent of people who are assholes. Women have to be prepared to get their hands dirty and help each other out, but I don't see that all the time. Women have to change as much as men have to change in different areas, but everyone has to change. Pointing fingers at men is a waste of time and a totally inaccurate way of painting the picture.

An article was recently published in Billboard about you being sexually assaulted at such a young age for the first time. What made you open up about that experience? How do you hope it helps other women?

To be honest, it's not the first time I've talked about that [experience]…it's just the first time it was published. I didn't have any agenda whatsoever, other than I spoke about it and the writer chose to focus on that [subject]. I've always been open about sex and how it played a part in my life. I don't have anything to hide from anyone. If you ask me a question, I'll be as forthright with you as I can. In this case, I never had spent a lot of time thinking about the situation I found myself in at that young age. I guess I was so careless as a young woman that I'm not even entirely sure I fully understood what had occurred.

But it wasn't your fault at all.

Of course not. I just mean I was a careless human being because I should have thought about it more seriously. It's only in recent retrospect that I consider it a form of sexual assault. That's my own ignorance and my own misunderstanding. I think it's important that we, as women, talk about sexual violence of any sort, whether it's implied or followed through. We as women must speak up because it's only when we do that we have a chance in hell of limiting our encounters with sexual violence.

Do you think you will ever feel any regret about opening up about it publicly?

I don't have any regret about saying anything. What do I have to lose? What do I have to hide? I'm here for a very limited amount of time -- my lifetime, so to speak, is running out already. I can [spend] my lifetime in service to making things a bit better for women who are following in my footsteps. I feel like I'm as inconsequential as a blade of grass or an ant, so why should I be precious about my life experience when it can help inform others -- especially young women who I feel protective of. I never have regrets about speaking up about my life experience -- I think that's a strange way of looking at the world.

2016 has been a fairly significant year for women coming forward about sexual harassment and abuse in the music industry. Do you think people will continue to talk about this, or will speaking up against the music industry remain intimidating for most?

Unfortunately, assholes are assholes, and they're everywhere. They're not specific to the music industry. There are unfortunately a minority of people all over the world who are assholes -- male and female. The more women get accustomed to speaking up about inappropriate sexual behavior, the less confident perpetrators of that kind of violence or harassment there will be. The problem is that so many people rely on our complicit silence to get away with outrageous behavior in many areas of our lives. They understand that people are reluctant to speak up, so that's what I think has been great about musicians speaking up. When people who are preying on women see and hear women speaking up, that's intimidating to them, because it starts to lift the veil on insidious behavior that's carried on for far too long.